We Produced 15m Metric Tonnes of Rice This Year - Nigerian Farmers. Slurping up snails in Nigeria. Nigeria Pulling Out of Recession Through Agricultural Activities - Presidency. Presidential spokesman Garba Shehu says efforts to get the nation out of its present economic challenges is beginning to yield positive results, especially in the area of agriculture. 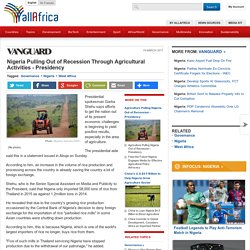 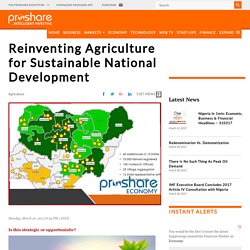 How has Agriculture faired in the context of National Development Are we in the right room? We may relate more with the nominal indices 2016 Sectorial GDP Growth Is it as risky as we think? Do we need to reinvent Agriculture? What is Agriculture’s role in National Development? Have we really produced more food? We have remained at, or below our export levels since independence.

Food requirement in Africa is fast outpacing our per capita food production; creating a supply gap Both productivity and technology adoption gaps will require creative funding solutions. Is there room for improvement in Nigeria agricultural industry? Nigeria Agricultural Sector, An alternative to the Capital Markets? How do we reinvent Agriculture for Sustainable National Development? Nigerian government looking to revitalize Nigeria's ailing coconut production sector. Wheat importation to end soon – OGBEH. By Gabriel Ewepu ABUJA- THE Minister of Agriculture and Rural Development, Chief Audu Ogbeh, yesterday, maintained that wheat importation into the country will end soon as the federal government has put in place measures to boost productivity of local wheat farmers. 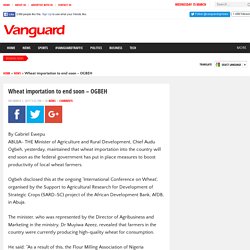 Ogbeh disclosed this at the ongoing ‘International Conference on Wheat’, organised by the Support to Agricultural Research for Development of Strategic Crops (SARD-SC) project of the African Development Bank, AfDB, in Abuja. The minister, who was represented by the Director of Agribusiness and Marketing in the ministry, Dr Muyiwa Azeez, revealed that farmers in the country were currently producing high-quality wheat for consumption.

He said: “As a result of this, the Flour Milling Association of Nigeria submitted a written commitment to the ministry, stating that they will off-take all the wheat produced by Nigerian wheat farmers.” Nigeria's rice boom raises output but old problems persist. Led by Nigeria, Africa opening door to genetically modified crop cultivation. Fidelity Bank: Only 1% of Nigeria’s land mass is irrigated. Fidelity Bank Plc., says only one percent of Nigeria’s 84 million hectares of arable land is irrigated, and the bank is willing to support partners, who wish to take on projects in Agriculture to change this. 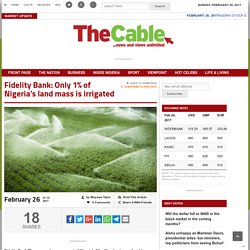 The bank pledged to support ongoing efforts aimed at strengthening Nigeria’s agricultural value-chain by providing innovative funding schemes and technical advisory services to micro small and medium scale enterprises (MSMEs) and commercial agribusiness projects. Omobola Odubanjo , the bank’s head, Agric Division, disclosed this in Lagos while delivering a keynote address at a breakfast meeting organised by Nigerian-Netherlands Chamber of Commerce (NNCC) in strategic partnership with Fidelity Bank. Odubanjo said the Bank’s decision to move in this direction was driven essentially by the sector’s huge potential to become a major Foreign Exchange (FX) earner and help boost the country’s revenue base.

Nigeria: Presidency to Slash Fertiliser Price By 40% By Isiaka Wakili The Presidency says its fertiliser initiative has begun yielding results with the production of more than 4,000 metric tonnes of locally-blended fertiliser in the first week of operation. 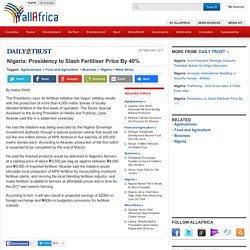 The Senior Special Assistant to the Acting President on Media and Publicity, Laolu Akande said this in a statement yesterday. He said the initiative was being executed by the Nigeria Sovereign Investment Authority through a special purpose vehicle that would roll out the one million tonnes of NPK fertiliser in five batches of 200,000 metric tonnes each. According to Akande, production of the first batch is expected to be completed by the end of March. Business - Dangote Rice Plans Massive Expansion in Nigeria. Nigeria Set To Harvest More Wheat In Feb. 2017. Flour Mills of Nigeria is working with Nigerian farmers on the local cultivation of wheat in the country, its Group Chief Executive, Mr Paul Gbededo, has said.Gbededo told newsmen in Lagos on Saturday that the company has signed MoU with local farmers and the Federal Government on local production of wheat for the industry. 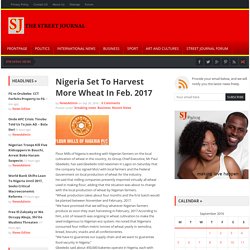 He said that milling companies presently imported virtually all wheat used in making flour, adding that the situation was about to change with the local production of wheat by Nigerian farmers. “Wheat production takes about four months and the first batch would be planted between November and February, 2017.

“We have promised that we will buy whatever Nigerian farmers produce as soon they start harvesting in February, 2017.According to him, a lot of research was ongoing in wheat cultivation to make the seed indigenous to Nigerian eco system. Nigeria: Govt, States to Spend 1.8% of Budgets On Agriculture. By Nuruddeen M. 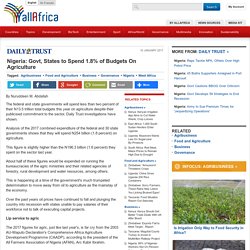 Abdallah The federal and state governments will spend less than two percent of their N13.5 trillion total budgets this year on agriculture despite their publicised commitment to the sector, Daily Trust investigations have shown. Analysis of the 2017 combined expenditure of the federal and 30 state governments shows that they will spend N254 billion (1.8 percent) on agriculture. This figure is slightly higher than the N196.3 billion (1.6 percent) they spent on the sector last year. 55 per cent of Nigeria’s fruits, vegetables perish before consumption. The Agricultural Fresh Produce Growers and Exporters Association of Nigeria (AFPGEAN) says between 55 per cent and 72 per cent of fresh produce grown in the country perish before they can be consumed. 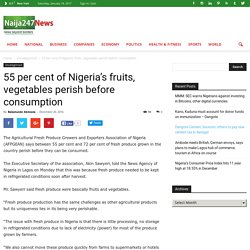 The Executive Secretary of the association, Akin Sawyerr, told the News Agency of Nigeria in Lagos on Monday that this was because fresh produce needed to be kept in refrigerated conditions soon after harvest. Mr. Sawyerr said fresh produce were basically fruits and vegetables. “Fresh produce production has the same challenges as other agricultural products but its uniqueness lies in its being very perishable. Agro-Boom: Mechanised Farming To Get BOI N10bn Support In 2017. It is going to be a race towards mechanised farming come 2017 as the Bank of Industry (BOI) has set aside a total of N10 billion to support the acquisition of agro-equipment to encourage agricultural service providers and farmers explore the benefits of modern farming in Nigeria. 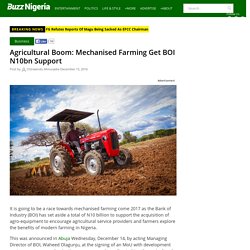 This was announced in Abuja Wednesday, December 14, by acting Managing Director of BOI, Waheed Olagunju, at the signing of an MoU with development partners on agro-mechanisation programme. According to him, the agricultural sector which was the largest employer of informal labour, will receive the much needed attention. More News: Immigration Plans To Increase Price Of International Passports. Nigeria: Why We Are Sending Soldiers to Argentina to Learn Cattle Rearing - Buratai. The Nigerian army has said that some army officers have been sent to Argentina to learn the art and trade of cattle rearing in preparation for the setting up of cattle ranches across the country. 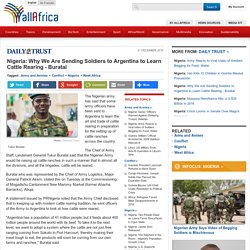 The Chief of Army Staff, Lieutenant General Tukur Buratai said that the Nigerian Army would be raising up cattle ranches in such a manner that in almost all the divisions, and all the brigades, cattle will be reared. Buratai who was represented by the Chief of Army Logistics, Major General Patrick Akem, stated this on Tuesday at the Commissioning of Mogadishu Cantonment New Mammy Market (former Abacha Barracks), Abuja.

A statement issued by PRNigeria noted that the Army Chief disclosed that in keeping up with modern cattle rearing tradition, he sent officers of the Army to Argentina to look at how cattle were reared. "Argentina has a population of 41 million people, but it feeds about 400 million people around the world with its beef. Akwa Ibom State Governor, Udom Emmanuel, San Carlos, cattle ranch, Uyo, Professor Edet Udoh, Carlos Cabal. Governor Emmanuel stated this when he played host to San Carlos – a group of Agro Allied Investors from Mexico, who visited him at Government House, Uyo.

He said: “It behooves on the leadership of the state to harmonize the God-given resource to fight poverty and hunger. “I am often appalled by the vast lands surrounding the state and not cultivated yet we depend on importing food items from neighbouring states whereas 80% of what we consumed should be produced locally”. He hinted that in keeping with the focus of hi administration to ensure food sufficiency, he had “evolved an environment induced diagnosis by partnering with other investors to achieve set goals and make Agriculture a big business for farmers in the state”.

Musings On The Rice Debate. The Rice debate in Nigeria is an intense and fierce one by different players who don’t understand the dynamics and only tend to put out emotional arguments not grounded on facts and logic but only aim to score cheap political points. They try to play to the fact that self-sufficiency is a walk in the park and merely requires sloganeering and mantra speak. I beg to disagree, we need to think through the issues and be pragmatic in our approach.

As a background and to further contextualize the issue, let us dimension our consumption and production and then find out the gap and thereafter look at factors militating against our quest to achieve self-sufficiency and what can be done to realize same. FG distributes smartphones with agric app to rice farmers. By Boluwaji Obahopo LOKOJA—The Federal Government, yesterday, flagged off the distribution of agriculture app smartphones to rice farmers across the country.

The RICEADVICE smartphones distribution, which was done through the National Cereals Research Institute, NCRI, commenced with the training of 50 rice farmers extension officers on how to use the smartphones to obtain relevant information to boost rice production in the country. The training programme drew participants from six pilot states of Kogi, Nasarawa, Kano, Ebonyi, Kebbi and Niger, where rice is being produced with comparative advantage. Nigeria will begin to export rice next year – CBN - Daily Post Nigeria. The Central Bank of Nigeria, CBN, has stated that with the progress so far recorded through its agricultural financing policies, Nigeria will begin exporting rice to other countries before the end of next year. This was disclosed on Tuesday by CBN’s Acting Director, Corporate Communication, Mr. Isaac Okoroafor, during a sensitisation/awareness programme for farmers in Bayelsa State on the apex bank’s Anchor Borrowers’ Programme, ABP.

Stating that the CBN’s ABP had started yielding fruits, he said the harvest in rice this year has already exceeded the projections, noting that if the tempo was sustained, by the end of 2017, Nigeria would not only meet its national demands but would export to other countries. Okoroafor said, “We started a pilot programme in Kebbi State with 78,000 farmers, cultivating an average of one hectare and that was when President Muhammadu Buhari launched the programme in March last year. “Not only Kebbi, Ebonyi State has keyed into it. Nigeria to get GM beans in commercial quantity by 2019 – NABDA. World Bank Supports 11,000 Tomato Farmers In Kano - Reports Afrique News.

President of the association, Tola Faseru, who disclosed this, said that the nation produces about 160,000 metric tonnes of cashew yearly, during the cashew planting season. Faseru said the target is to move production to 500,000 tonnes by 2020, and also be able to develop a processing capacity of 70 per cent which is about 350,000 metric tonnes, noting that Nigeria is the sixth largest cashew producer in the world after Ivory Coast, India, Vietnam, Tanzania and Guinea Bissau. Adesina: Nigeria increased food production by 21m tonnes in 4 years. Nigeria: Flour Millers Seal Pact With Farmers to Boost Local Wheat Production. Cassava farmers can get 50 tonnes per hectare – FECA » TODAY.ng. Local farmers can tap from N800bn poultry industry » TODAY.ng.