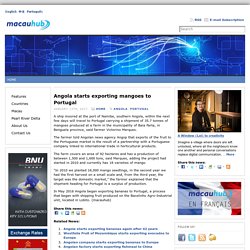 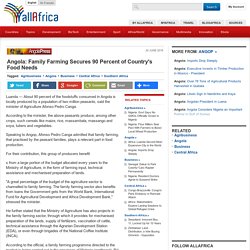 According to the minister, the above peasants produce, among other crops, such cereals like maize, rice, massambala, massango and soya, tubers and vegetables. Speaking to Angop, Afonso Pedro Canga admitted that family farming, that practised by the peasant families, plays a relevant part in food production. For their contribution, this group of producers benefit s from a large portion of the budget allocated every years to the Ministry of Agriculture, in the form of farming input, technical assistance and mechanised preparation of lands.

"A great percentage of the budget of the agriculture sector is channelled to family farming. "Family farming is on the first line of the priorities of the action of the Ministry of Agriculture," stressed the minister. Angola, Brazil renew technical cooperation in aquaculture. Twenty eight thousand tons of maize meal produced in 2015. Angola: Electronic systems ensure fishing vessels monitoring. Pérola do Kikuxi Farm close to produce enough eggs for Angola. Could Angola’s first banana exports in 40 years save its economy? — Quartz. Seventeen tons of bananas set sail from the Angolan port of Lobito on Monday (May 23), headed for Portugal. 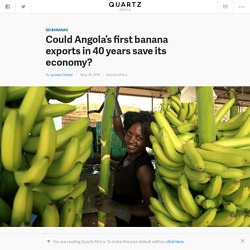 It’s the first time in more than 40 years that Angola has exported fruit to Europe, and a hopeful sign that Angola’s precarious economy could be diversifying. Angolans, dismayed by weakening oil prices, are looking to bananas as an alternative for growth. This year Angola became Africa’s largest oil producer, but the roughly $50 billion a year in revenue has come at the expense of other sectors. Angola imports 90% of its food at a cost of $5 billion each year, according to Reuters. Diamonds are Angola’s second largest export, and the industry is growing at a healthy clip. Angola’s agricultural sector grew by only 0.2% last year, and only about a third of Angola’s arable land has been cultivated. “It was very difficult before the bananas returned. When war ended in 2002, Angola emerged as a major oil producer gunning to become Africa’s Dubai. Egg production to rise to one billion. Bié: Angola to invests USD 254,000 in apiculture. Angola: Namibe Gains New Fishery Companies.

Ambitious goals to harness the potential of Angolan aquaculture. Fish farming in a rural area of Angola. 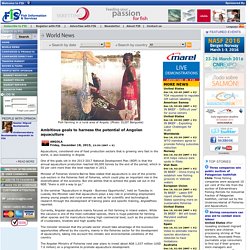 (Photo: DLIST Benguela) Ambitious goals to harness the potential of Angolan aquaculture ANGOLA Friday, December 18, 2015, 23:50 (GMT + 9) Aquaculture, considered one of food production sectors that is growing very fast in the world, is also boosting in Angola. One of the goals set in the 2013-2017 National Development Plan (NDP) is that the annual aquaculture production reached 60,000 tonnes by the end of the period, which is 50 per cent more than the level reached in 2013. Minister of Fisheries Victoria Barros Neto stated that aquaculture is one of the priority sub-sectors in the fisheries field of fisheries, which could play an important role in the diversification of the economy. Agriculture Angola - Why invest in 2015. 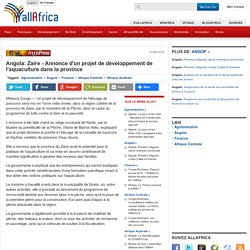 Angola Magazine - Kwanza sul - Fábrica de laticínio. Angola Magazine - Malanje: Projecto Agro-industrial da Quizenga. Agricultural production in Angola expected to rise by 12 pct in 2015. November 20th, 2014 News The 9.7 percent GDP growth rate included in Angola’s State Budget for 2015 is the aggregate result of sector forecasts, with a focus on agriculture, which is expected to grow by 12 percent next year, said the Minister for Planning and Territorial Development. 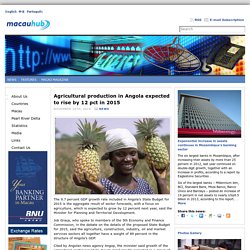 Angola - Agriculture in Malanje Province. The Province of Malanje is playing a leading role in restoring Angolan agriculture to its former glory; and the Capanda agro-industrial hub is the epicenter of Malanje’s agricultural revival Twelve years on since the end of Angola’s civil war and the country still relies heavily on the importation of agricultural products. 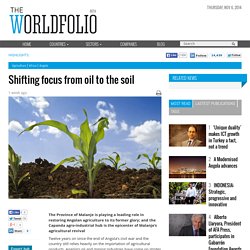 Angola’s oil and mining industries have come on strides since 2002, but agriculture has remained neglected, despite the country’s rich potential, fertile soils, vast arable land and favorable climate. For the Governor of Malanje Province, Norberto dos Santos, this is something difficult to accept: “Twelve years after the war, we still have to import products that we could very well produce locally, especially here in Malanje, since our soil is naturally very fertile. Angola Magazine-Benguela vai beneficiar de um mega projeto hídrico. Livestock breeding by Agriterra increases in Mozambique. May 2nd, 2014 News Breeding of livestock for meat by Agriterra in Mozambique via Mozbife Ltd “is experiencing significant growth,” the company said in a statement signed off by director Andrew Groves. 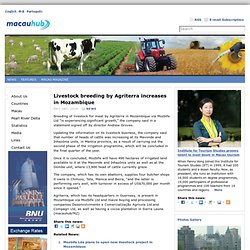 Updating the information on its livestock business, the company said that number of heads of cattle was increasing at its Mavonde and Inhazónia units, in Manica province, as a result of carrying out the second phase of the irrigation programme, which will be concluded in the final quarter of the year. Once it is concluded, Mozbife will have 490 hectares of irrigated land available to it at the Mavonde and Inhazónia units as well as at the Dombe unit, where 13,800 head of cattle currently graze.

Areas under cultivation in Angola expected to almost double to 9 million hectares. Construction in Capanda Agro-Industrial Pole should be finished in 2014. July 9th, 2013 News The Sociedade de Desenvolvimento Agro-industrial de Capanda (Sodepac) is investing more than 10.9 billion kwanzas (US$113 million) in a project situated north of the Cuanza River in Angola’s Malanje province, the company’s president said. 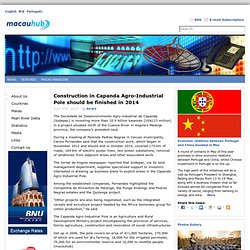 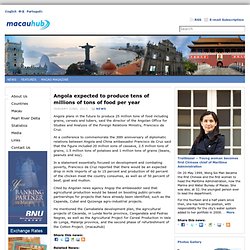