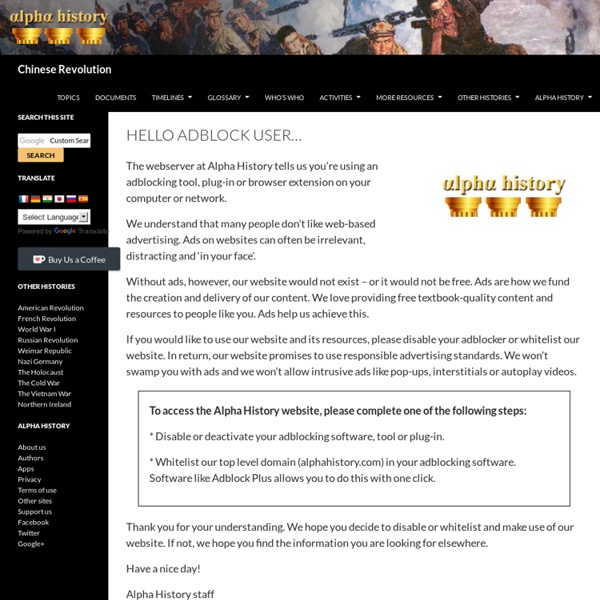 The webserver at Alpha History tells us you’re using an adblocking tool, plug-in or browser extension on your computer or network. We understand that many people don’t like web-based advertising. Ads on websites can often be irrelevant, distracting and ‘in your face’. Without ads, however, our website would not exist – or it would not be free. Ads are how we fund the creation and delivery of our content. We love providing free textbook-quality content and resources to people like you. If you would like to use our website and its resources, please disable your adblocker or whitelist our website. To access the Alpha History website, please complete one of the following steps: * Disable or deactivate your adblocking software, tool or plug-in. * Whitelist our top level domain (alphahistory.com) in your adblocking software. Thank you for your understanding. Have a nice day! Alpha History staff

Declassified: Ayatollah Khomeini (2006) Before there was Osama bin Laden there was Ayatollah Khomeini, a radical Muslim leader who challenged the world's infidels in the name of Allah. After his father was killed by bandits, the young Khomeini was brought up by his mother and aunt. However, when he was only fifteen he suffered further loss as his aunt died and then shortly afterwards his mother also passed away. THE CHINESE REVOLUTION AND THE CHINESE COMMUNIST PARTY Selected Works of Mao Tse-tung December 1939 [The Chinese Revolution and the Chinese Communist Party is a textbook which was written jointly by Comrade Mao Tse-tung and several other comrades in Yenan to the winter of 1939. The first chapter, "Chinese Society", was drafted by other comrades and revised by Comrade Mao Tse-tung. The second chapter, "The Chinese Revolution", was written by Comrade Mao Tse-tung himself.

Visual essay-writing: cartoons, sticky-notes and plenty of collaboration! To develop analytical and essay-writing skills in a collaborative and engaging manner, start by gathering a series of photographs relating to the topic in question: A pile of cartoons and photographs (maybe about 20 of these)PodcastsVideo clipsTextbooksArticles Next, divide the class into groups. Within each group, three students should be responsible for organising the cartoons into meaningful categories to answer the key question for the lesson (in the photograph shown here, cartoons are being organised into meaningful categories to help understand “Why was the Marshall Plan so controversial?”).

Sun Yat - Sen, The Three Principles of the People Sun Yat–Sen, The Three Principles of the People Sun Yat–Sen (1866–1925) was a Chinese doctor who led the revolution against the Qing dynasty in 1911. Educated in Hawaii and Japan, he tried to compare Western concepts to Chinese conditions. Although his republic proved relatively short–lived, it showed the influence of the heritage of the French Revolution. Foreign scholars always associated democracy with liberty and many foreign books and essays discuss the two side by side. Russian Revolution Lesson Group Project - ThePlaz.com Good job! Good job to all my group members. I think we had a fun time despite the fact that the game didn't work as well as we planned (No more Hershey kisses!!!) We caught a lot of people not paying attention by Mr. Smith seemed to remain interested. Grade:110/115

<STRONG>Xinhai Revolution</STRONG> The Revolution of 1911, or the Xinhai Revolution, began as the Wuchang Uprising in 1910. It resulted in the abdication of the child emperor Puyi on February 12, 1912 and the establishment of the Republic of China. The revolution was a part of extensive popular uprisings that had been occurring against the Qing Dynasty (1644-1911) since the mid 1800s. Milestones: 1899–1913 In October of 1911, a group of revolutionaries in southern China led a successful revolt against the Qing Dynasty, establishing in its place the Republic of China and ending the imperial system. Photograph of Revolutionaries in Shanghai In the Nineteenth Century, the Qing Empire faced a number of challenges to its rule, including a number of foreign incursions into Chinese territory. The two Opium Wars against Western powers led by Great Britain resulted in the loss of Hong Kong, forced opening of “treaty ports” for international trade, and large foreign “concessions” in major cities privileged with extraterritorial rule.

China China is a major country in East Asia. The population is predominantly ethnic Chinese (Han) with significant minorities in Tibert, Xinjiang and Mongolia. In 1644 China was ruled by the Qing dynasty and by the 18th century the country had become very prosperous. Several rebellions took place in the 19th century. Defeat in the Sino-Japanese War (1894) and the Boxer Rising encouraged reforms but the dynasty ended in the Chinese Revolution of 1911. From Reform to Revolution, 1842 to 1911 Introduction After China's defeat in the Opium War, there was great concern about the superiority of the West and fierce debate about how to respond. In 1842 Wei Yuan (1794-1856), a scholar and adviser to the government, concluded that the West had beset China because of the West's more advanced military technology. He outlined a plan for maritime defense which included "building ships, making weapons, and learning the superior techniques of the barbarians." In the decades that followed, other scholars went further than Wei, calling not only for the purchase and eventual manufacture of Western arms but also for the establishment of translation offices and institutions where students could study Western languages and mathematics in addition to Chinese classics. This approach came to be known as "self strengthening;" its principle goal was to maintain the strong essence of Chinese civilization while adding superior technology from abroad.

What Was the Long March? Imagine leading your troops on a retreat through territory so deadly that it kills 90% of them. Imagine climbing through some of the highest mountain ranges on Earth, fording flooded rivers without any boats or safety equipment, and crossing rickety rope bridges while under enemy fire. Imagine being one of the soldiers on this retreat, perhaps a pregnant female soldier, possibly even with bound feet. This is the myth and to some extent the reality, of the Chinese Red Army's Long March of 1934 and 1935.