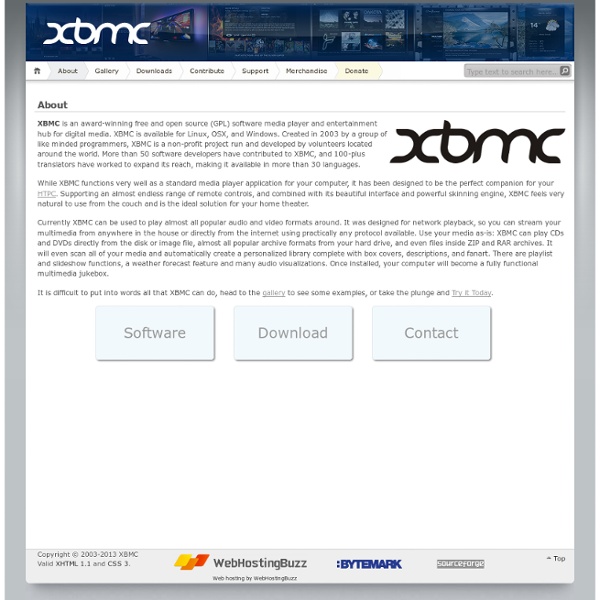 XBMC is an award-winning free and open source (GPL) software media player and entertainment hub that can be installed on Linux, OSX, Windows, iOS, and Android, featuring a 10-foot user interface for use with televisions and remote controls. It allows users to play and view most videos, music, podcasts, and other digital media files from local and network storage media and the internet. Our forums and Wiki are bursting with knowledge and help for the new user right up to the application developer. We also have helpful Facebook, Google+, Reddit, Twitter and Youtube pages. Music XBMC can play all your music including mp3, flac, wav and wma formats. Movies XBMC can do Movies too! TVShows The TVShows library supports episode and season views with posters or banners, watched tags, show descriptions and actors. Pictures Import pictures into a library and browse the different views, start a slideshow, sort or filter them all using your remote control. Add-Ons Skin Bello UPnP Web Interfaces

Free Flash Animation Tool – Vectorian Giotto Features We created Giotto for designers, not coders Giotto is the free Flash animation package made for you to design, not to code. With Giotto you can relax and focus your imagination on creative concepts, integrating stunning graphics and music into masterpieces of design. The latest versions of Adobe® Flash® are moving away from designers. They are becoming more and more oriented towards coders. BurningIsoHowto Ubuntu is distributed over the Internet as DVD image (.iso) files. The GettingUbuntu page has links to the ISO image files, as well as other methods of getting Ubuntu. Before burning a DVD, it is highly recommended that you verify the md5 sum or sha256 sum (hash) of the .iso file. For instructions, please see HowToMD5SUM and HowToSHA256SUM. For the current list of Official Ubuntu SHA256 hashes, see the SHA256SUMS file for the release you're using under (and optionally the PGP signatures in the SHA256SUMS.gpg file); hashes for the older MD5 algorithm are in the same directory.

ClipFinder HD - Overview The brand-new Ashampoo ClipFinder HD gives you web video the way it should be. Search in up to fifteen video portals at once or in selected portals, view videos directly and convert and save them to your hard disk with a single click. Nothing makes finding, viewing, saving and managing web videos easier. And Ashampoo ClipFinder HD isn’t just better, it’s also still completely free.

100 Lost Rock Albums From The 1970s - An Extract Intro There can’t be another decade that has furnished us with such an abundance of great music. After the commercial success of The Beatles there followed a massive surge in R&D. Artists were frequently able to release ten LPs in as many years, with many famous names only hitting their stride a few discs in. A multitude more were kept on roster in the hope; their creativity subsidised by bigger acts. Recording technology advanced at breakneck speed in the last years of the sixties so that the expertise, hardware and facilities had reached a plateau of excellence by 1970. Ten Dying IT skills By Linda Leung There are some things in life, like good manners, which never go out of style, and there are other things, like clothing styles that fall in and out of fashion, but when an IT skill falls out of favor it rarely ever comes back. Here's our list of 10 dying IT skills. If any of these skills are your main expertise, perhaps it's time to retrain. 1.

Why Viewers Could Soon Control Super Bowl Ads Mitt tweet: ABC News producers analyzed real-time social media reactions to two GOP debates—including a spike in tweets when Mitt Romney challenged Rick Perry to a $10,000 bet. During this Sunday’s Super Bowl, a record five million viewers are expected to tweet or make other social media comments—not just about the game, but also about the many beer, snack, and car ads that are integral to the annual sports and entertainment ritual. This activity—up from 900,000 people making Super Bowl posts during last year’s game—is now happening at such a vast scale that executives in television, broadcast news, and advertising expect analytics of the comments to start shaping advertising choices—and even the direction of news coverage—in near real-time. By the time next year’s Super Bowl rolls around, advertisers—poring over social media analytics of their ads—are likely to replace less-liked versions of ads with better-rated ones as the game goes on.

Google TV Meetup and Hangout On Air Invalid quantity. Please enter a quantity of 1 or more. The quantity you chose exceeds the quantity available.