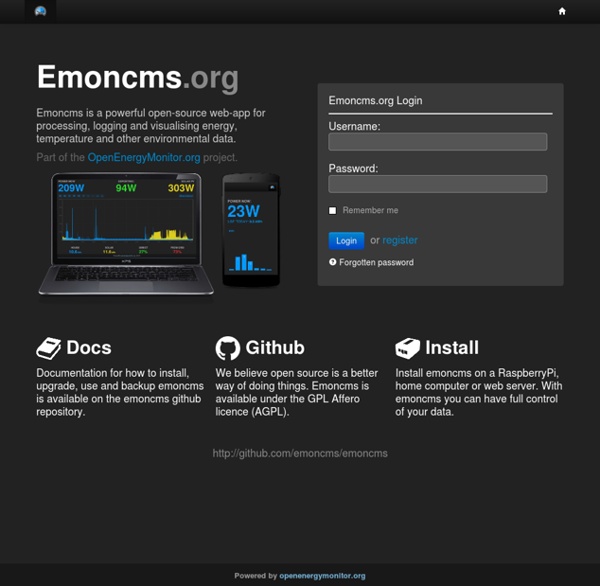 FBench Project : Home FBench Project Open Tool for IEC 61499 Function Block Engineering FBench Project is ongoing development of an open-source graphical software tool for embedded automation components and systems based on the IEC61499 standard. The project originates in the OOONEIDA Workbench pioneered by 'the function block Guru' Dr. James Christensen in 2005. You can download and start familiarizing yourself with the current code base. Frequently asked questions How do I connect my eedomus box to the Internet? By plugging directly to your Internet router via the provided Ethernet cable, and by registering on the website. How much energy consumes my eedomus box? Less than 1 W, hence the fact that it can be permanently plugged (1 permanent Watt equals 1 euro your annual electricity bill). How far can I place the devices from my box? We recommend not to exceed 10m, and position the plugs so they will act as radio “relay” to other devices.

Raspberry Pi temperature logger Raspberry Pi (boxed) temperature logger OK, so a while ago I built a little temperature measuring system using an Arduino Uno, an Arduino ethernet Shield, a real time clock module and some digital 1-wire temperature sensors. I hooked up a serial interfaced LCD display to display information such as IP address, time, date and the temperature readings and sat it running and logging data to a micro SD card. Where I left the post, I was planning on implementing more functions to the system, basically to serve web pages containing graphics (temperature charts) as well as store data and to implement an email alerting system. But I ran into a basic problem that is the limited memory on the Uno. From yesteryear I remembered doing some Z80 assembler programming and writing some BASIC programs on a Sinclair Spectrum with only 32 kB of memory.

About XBMC is an award-winning free and open source (GPL) software media player and entertainment hub that can be installed on Linux, OSX, Windows, iOS, and Android, featuring a 10-foot user interface for use with televisions and remote controls. It allows users to play and view most videos, music, podcasts, and other digital media files from local and network storage media and the internet. Our forums and Wiki are bursting with knowledge and help for the new user right up to the application developer. We also have helpful Facebook, Google+, Reddit, Twitter and Youtube pages.

Arduino 1-wire temperature sensors So you have played a bit with your Arduino, and have heard about other people using it to monitor the temperature, but weren’t sure how they did it – Here is how I did. Maxim make a very simple 1-wire temperature sensor – the DS18B20 (the replacement to the DS1820). This 3 pin sensor looks just like a transistor, and can work with only two wires, combined data+power and ground. You can put several on the same wire and address them all separately.

tekaibin.en.alibaba.com/product/1246395770-219225675/_TEKAIBIN_230v_led_module_ce_z_wave_module_TZ71_TZ76_Z_wave_on_off_Switch_Insert_module.html 1.TZ71 / TZ76 Z-wave on/off Switch Insert 2.OEM factory 3.CE Approval and and 1 year warranty 4.New PC material Recommendation of Z-Wave Products Z-wave on/off Switch Insert Informations The TEKAIBIN Z-Wave Embedded Switch Control module is a transceiver which is a Z-Wave enabled device and is fully compatible with any Z-Wave enabled network. Mini size design let the module can easily put into the wall box and still have enough space to install the traditional wall switch and easily hide itself into the wall box and that will be good for the house decoration .

Operating an Arduino for a Year from Batteries The Arduino is a great product for producing a custom data collection system or controller. Programming is easy via a high-level language and a simple USB connection to the Arduino board. Incredible popularity has brought plenty of publicly available code and many add-on boards for interfacing sensors, storage, and wireless communications. However, most of my projects involve collecting data for multiple months, and access to mains power is often problematic.

Home of FHEM Description Fhem is a GPL'd perl server for house automation. It is used to automate some common tasks in the household like switching lamps / shutters / heating / etc. and to log events like temperature / humidity / power consumption. SunCalc - sun position, sunlight phases, sunrise, sunset, dusk and dawn times calculator SunCalc is a little app that shows sun movement and sunlight phases during the given day at the given location. You can see sun positions at sunrise, specified time and sunset. The thin orange curve is the current sun trajectory, and the yellow area around is the variation of sun trajectories during the year. The closer a point is to the center, the higher is the sun above the horizon.