Farming robots get to grips with weeding at Harper Adams. Image copyright BBC Sport Researchers at Harper Adams University in Shropshire are trying to sow, look after and then harvest a field of barley using only robots and autonomous vehicles. 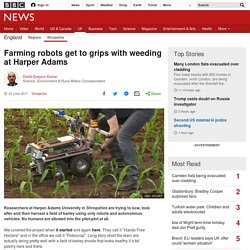 No humans are allowed into the pilot-plot at all. We covered the project when it started and again here. They call it "Hands Free Hectare" and in the office we call it "Robocrop". Long story short the team are actually doing pretty well with a field of barley shoots that looks healthy if a bit patchy here and there. In fact, they're doing so well with their combination of off-the-shelf tech and nifty engineering skills that I began to wonder if building farming robots wasn't actually pretty easy? 400 Burger Per Hour Robot Will Put Teenagers Out Of Work - Geek.com. Automation poses a high risk to 1.2m Scottish jobs, report says. Image copyright Getty Images. 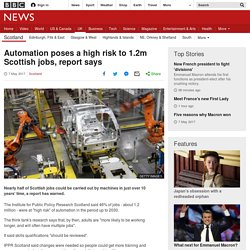 The Second Machine Age. Stream or download the latest Tech Tent podcastListen to previous episodes on the BBC websiteListen live every Friday at 15:00 GMT on the BBC World Service From driverless cars to smartphone apps offering instant translation, the evidence of rapid progress in artificial intelligence is now clear to see. 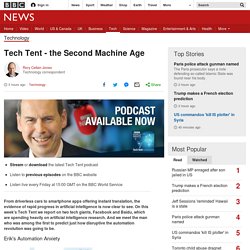 On this week's Tech Tent we report on two tech giants, Facebook and Baidu, which are spending heavily on artificial intelligence research. Hermes begins trial using self-driving robots in London. The growth of industrial robots. YOU may never have heard of FANUC, the world’s largest maker of industrial robots. 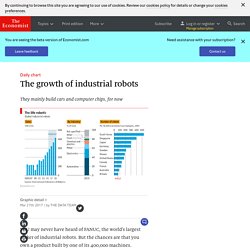 But the chances are that you own a product built by one of its 400,000 machines. Established in 1956, the Japanese company’s automated workers build cars for Ford and Tesla, and metal iPhone cases for Apple. Robotic barman pours Rory a pint. Japanese insurance firm replaces 34 staff with AI. Image copyright AFP. 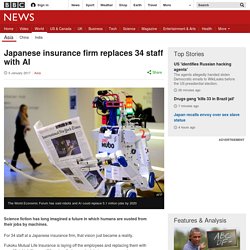 Thousands of jobs lost as Foxconn fully automates its factories. Apple supplier Foxconn may be getting rid of its human workforce. 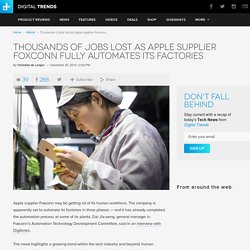 The company is apparently set to automate its factories in three phases — and it has already completed the automation process at some of its plants, Dai Jia-peng, general manager in Foxconn’s Automation Technology Development Committee, said in an interview with Digitimes. NOBEL ECONOMIST: 'I don’t think globalisation is anywhere near the threat that robots are' Economist Angus Deaton. 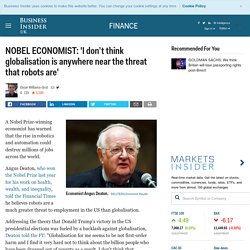 REUTERS/Dominick Reuter A Nobel Prize-winning economist has warned that the rise in robotics and automation could destroy millions of jobs across the world. Angus Deaton, who won the Nobel Prize last year for his work on health, wealth, and inequality, told the Financial Times he believes robots are a much greater threat to employment in the US than globalisation. Robots and Industrialization in developing countries. Artificial Intelligence, Automation and the Economy. AI will eliminate 6 percent of jobs in five years, says report. Within five years robots and so-called intelligent agents will eliminate many positions in customer service, trucking and taxi services, amounting to 6 percent of jobs, according to a Forrester report. 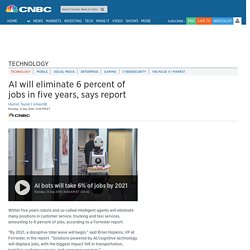 They are powered by artificial intelligence and they can already understand a person's behavior, interpret their needs and even make decisions for them. Elon Musk: Robots will take your jobs, government will have to pay your wage. Computers, intelligent machines, and robots seem like the workforce of the future. 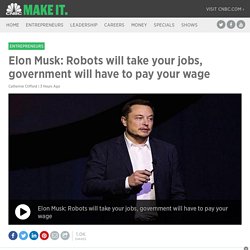 And as more and more jobs are replaced by technology, people will have less work to do and ultimately will be sustained by payments from the government, predicts Elon Musk, the iconic Silicon Valley futurist who is the founder and CEO of SolarCity, Tesla, and SpaceX. According to Musk, there really won't be any other options. The real reason this elephant chart is terrifying – NewCo Shift. It’s been called the “elephant graph”: starting low at the tail on the left, gradually rising up to the top of the elephant’s head, sliding down his face and then back up as if he were raising his trunk proudly. 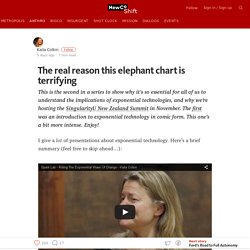 What it’s charting is global cumulative real income growth during the 20-year period from 1988 to 2008: how much people’s income has gone up or down, at every percentile, around the world. It was created by Branko Milanovic, Visiting Presidential Professor, Graduate Center, City University of New York and Senior Scholar, Luxembourg Income Center, and and Christoph Lakner, an Economist in the Development Research Group (Poverty & Inequality team) at the World Bank.

“Cut!” - the AI director. From Ex Machina to Terminator, artificial intelligence has long been a subject for film-makers. But what if AI could actually make a movie? At the Cannes Lions advertising festival on Thursday morning, an audience was shown a series of short films in the annual New Directors Showcase, which highlights emerging talent. More EU Lunacy - Robots Should Pay Social Security Taxes For The Pensions They Won't Get. As Bismark pointed out the law is like sausage – often yummy and useful but you really don’t want to watch either being made. At which point we’ve got the joy of watching the European Union try to make law concerning the rise of the robots as they come to steal all our jobs.

One of the suggestions, one of the more ludicrous suggestions, being that robots should pay social security taxes for all the social security benefits they won’t get. What they really mean of course is that anyone who has the temerity to employ robots should be paying higher taxes for said temerity. IBM, Local Motors ready to commercialize autonomous bus. Pepper robot to work in Belgian hospitals. Image copyright AZ Damiaan hospital. The future of the IoT job market. Editorial sobre Automatización. Artificially Intelligent Lawyer “Ross” Has Been Hired By Its First Official Law Firm. Bot Framework. Microsoft launches Bot Framework to let developers build their own chatbots. Microsoft today is introducing the Bot Framework, a new tool in preview to help developers build their own chatbots for their applications. There is also a new bot directory full of sample bots — like the BuildBot — that Microsoft is showing off today at the company’s Build developer conference in San Francisco.

A BotBuilder software development kit (SDK) is available on GitHub under an open source MIT license. These bots can be implemented into a variety of applications, including Slack or Telegram or text messages or even email. “Bots are like new applications,” Microsoft chief executive Satya Nadella said. Obama: Some jobs 'are just not going to come back' As Facebook, Google, Microsoft invest in AI, this is the outlook for banking. Google launches conversation-based Assistant. Image copyright Google. Forbes Welcome. Agiletown: the relentless march of technology and London’s response. Deloitte - The impact of technology on jobs in the UK. This KFC in China now uses robots to take customers’ orders. Foxconn replaces '60,000 factory workers with robots' Image copyright Getty Images Apple and Samsung supplier Foxconn has reportedly replaced 60,000 factory workers with robots.

One factory has "reduced employee strength from 110,000 to 50,000 thanks to the introduction of robots", a government official told the South China Morning Post. Fmr. McDonald's USA CEO: $35K Robots Cheaper Than Hiring at $15 Per Hour. As fast-food workers across the country vie for $15 per hour wages, many business owners have already begun to take humans out of the picture.