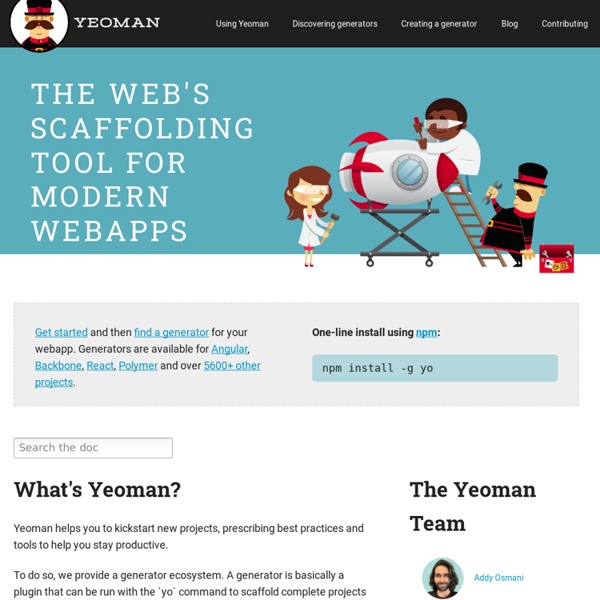 Get started and then find a generator for your webapp. Generators are available for Angular, Backbone, Ember and over 400 other projects. Read the Yeoman Monthly Digest for our latest picks. One-line install using npm: Why use Yeoman? With so many great tools available to front-end web developers these days it can sometimes be difficult to understand how they all fit together.

7 awesome browser features New APIs for the web seem to be released every week. It would be cool to be able to use them, but if you need to make sites for the average user, you won’t be able to implement them for years – right? Wrong. 11 Multi-touch and Touch events Javascript libraries Touch screen devices are ruling the mobile platform nowadays. Most of the smart phones have it, tablet and based on the trend, it's slowly come to our desktop as well. To develop a touch screen compatible web applications or website, you can use the existing touch events of the browsers or the platforms. There are two ways to create a touch support app - native or using the web development technologies (HTML, CSS, Javascript).

Separating JavaScript download and execution Not too long ago, I wrote a post entitled, Thoughts on script loaders[1], in which I discussed my thoughts on the continuing introduction of script loaders such as LABjs and ControlJS. In that post I also mentioned what I thought was the main problem that led to existence of these libraries. That problem is the inability of the developer to control the download of JavaScript files as separate from its execution. After a conversation with Steve Souders about ControlJS, I put together a proposal for a delayed script execution model in browsers[2].

How to Back Up a Linux Server to Amazon S3 with Duplicity and AutoMySQLBackup I often say there are only two types of data: data that is backed up, and data that is waiting to be lost. Even if you’re the most contentious hax0r who always backs up your data, if your backups are stored in the same physical location as the source data, then your data is still “waiting to be lost” in the event of a fire, flood, theft, or other disaster. By combining Amazon’s low-priced S3 (Simple Storage Solution) Cloud-based storage solution with some excellent some open source backup tools, you can now be more prepared than ever without spending a fortune. 5 Website Builders You Should See Let’s get this out of the way – WordPress is one of the most used website builders (or content management systems) in the world. It’s famous, powerful, flexible and enables you to have a piece of the internet real estate – your own website. Now that I’ve flattered it, the key question is – is it the right website builder for you? I’m guessing that you found this discussion here because you’re looking for some alternatives to WordPress.

A Baseline for Front-End Developers 12 Apr 2012 edit I wrote a README the other day for a project that I'm hoping other developers will look at and learn from, and as I was writing it, I realized that it was the sort of thing that might have intimidated the hell out of me a couple of years ago, what with its casual mentions of Node, npm, Homebrew, git, tests, and development and production builds. Once upon a time, editing files, testing them locally (as best as we could, anyway), and then FTPing them to the server was the essential workflow of a front-end dev. Introduction to RequireJS In this tutorial we are going to take a look at RequireJS, an AMD compatible asynchronous script loader that is incredibly powerful. In my experiments with RequireJS I've hugely enjoyed working with it and will be using it heavily in my future development. This is a fairly heavy post as far as complexity goes, but please do stick with it. I struggled to get my head around RequireJS and AMD for a long time but once it "clicks" it is really awesome. The basic use case for RequireJS is as a basic script loader, but in this tutorial I wont concentrate on that, but on its uses for modular development. RequireJS implements the AMD (Asynchronous Module Definition) spec, which means we can write our own modules and load them with RequireJS, allowing it to manage dependencies for us.

Thinking Async Here's the rub: when you load JavaScript from a third party you should do it asynchronously. You might want to load your own scripts asynchronously too, but for this article let's focus on third parties. There are two reasons for this: Nginx, Inc. Ever wonder what’s behind the leading sites you use every day? NGINX® is an open source web server that excels at large scale web integration, application security, web acceleration, content and application delivery. NGINX SE for mission critical applications Often companies and governments need more than code — they need immediate expertise that accelerates time to value for business essential capabilities. We’ve taken the next step beyond open source NGINX. 12 Sites That Will Teach You Coding for Free There was a time when knowing how to program was for the geekiest of geeks. That’s not exactly the case today. As most entrepreneurs, freelancers and marketers will tell you, learning how to program can help you succeed. Over the past year, I've been learning to code. It's helped me to become a much better entrepreneur -- I can dive in when my team needs to fix a few bugs on the site.

Best Web Development Trends For 2017! - Usersnap Technology changes constantly, so to be at the top of your game as a web developer, it’s vital you’re keeping up. It can be confusing and discerning when so many updates and developments are being released every few weeks. With 2017 just getting started, we’ve put together some information about the anticipated trends for this upcoming year and some advice about what areas of development you should be focusing on. Discussing new frameworks, techniques, and tools which are all working to enhance UX, consider this blog your one-stop-shop for all things 2017! We at Usersnap put together all our thoughts in this article. If you like this article, give it some sharing

Google JavaScript Style Guide We follow the C++ formatting rules in spirit, with the following additional clarifications. Curly Braces Because of implicit semicolon insertion, always start your curly braces on the same line as whatever they're opening. For example: if (something) { // ... } else { // ... }