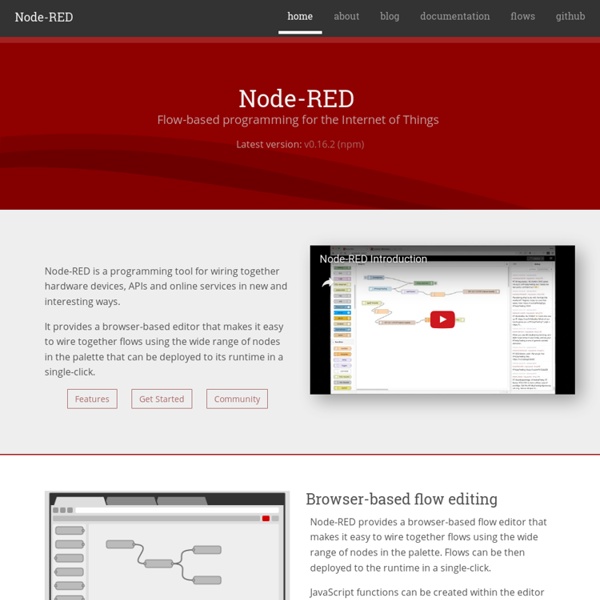 Node.js based Built on top of Node.js, taking full advantage of its event-driven, non-blocking IO model. Visual Editor A lightweight, browser-based editor that makes it easy to wire together flows and deploy in a single click. Plugin Nodes A simple API that allows new node types to be created in a few lines of JavaScript/HTML and dropped into the runtime.

Quick Connections for MongoDB with Node-RED After last week’s blog post where we connected an Internet of Things temperature sensor to record data in MongoHQ’s MongoDB instances, one Twitter follower commented that it would have been even easier if we had used Node-RED. We were going to write about Node-RED anyway but were keeping that previous post to the bare essentials. Node-RED is an application that was originally developed for handling the MQTT protocol messages but is far from limited to that. With Node-RED, the processing of messages is visualised as a graphical flow between “nodes” representing input, output or processing by Node-RED. A message is generated at an input node and is passed to any node that node’s out is connected to.

Home automation in Node.js with Raspberry PI and Arduino Some examples using the Arduino plugin. Example controlling plug-in receiver using a FS1000A 5V 433Mhz TX/RX Module. Arduino Schematics created with Fritzing: Settings for an m-e plug-in receiver with a 4 - 1 setting: The codes can be found here: Example reading sensor value from an LM 335 temperature sensor. 10 Common Mistakes Made by API Providers Twitter was one of the first to see what happened when traffic to the site came more from the API than the Web. It now has more than 65 million tweets per day, most coming from services that use the Twitter API. Twitter has made numerous changes to fix its API.

Will The Cloud be the Integrator in the Sky to Save Home Automation? A few weeks ago Amazon added support for the WeMo and Philips Hue lights to their Echo home speaker. Suddenly people who had the Amazon device plus the lighting products in their home could say things like, “Alexa, turn on the kitchen lights” and it would just work. Two disparate systems suddenly talking to each other, literally in this case, with little or no input or configuration from the user, all courtesy of the Cloud. Smart home bliss.

RasPi IoT Development Kit: ThingBox- Postscapes ThingBox, from the folks at FunDaTrix (itself the consumer-oriented arm of French software company Digital Airways), is a free and open-source project designed to let casual coders easily create programs for the Internet of Things. All you need is a Raspberry Pi and a little bit of technical know-how (but much, much less than a professional developer). “The Thingbox provides a ready-to-use, ‘all in one’ IoT software package that can be used by non-developers,” explained Digital Airways co-founder Nicolas Silberzahn in an email to Postscapes. The software includes the MQTT protocol for letting devices talk to one another and an HTTP server platform built on Node.js -- though the target user shouldn’t need to know much, if anything, about that.

Raspberry Pi Hosting Node-Red – Take the crap out of developing automation! – The Internet Of Things IOT - RASPBERRY PI This tutorial will document setting up Node-Red on your Raspberry Pi and getting some of your first automation tasks set up! Now I could harp on a good few hours about what Node Red is and how stupidly awesome it is however they say a picture tells a thousand words.. so below are a few thousand. So as you can see.. its graphical, its easy and its developed by cool guys at IBM..need I say more? Well probably so here is the official take on what Node Red actually is: A visual tool for wiring the internet of things Interface Board Kit The Quick2Wire® Interface Board Kit gives you safe and easy access to all the features on your Raspberry Pi’s expansion header. The Board and its components are supplied in kit form. You will also need a Raspberry PiTM computer with an SD card, power supply, keyboard, display and cables. We also provide Python libraries to help you drive connected devices. All the libraries include working examples, and you’ll find easy-to-follow tutorials at quick2wire.com

2013 Most Popular and Successful Web APIs Have you ever been stumped how to design a Web API? There are so many different approaches that you can take for even simple things, like paginating API result sets. If you list out your options, it can be easy to end up in analysis paralysis. I like to remind myself that I’m not the first person to tread on this soil. IoT Smoker - Hackster.io Yeeeeee Hawwwww!!! It’s summer time in Texas and with that comes outdoor cooking. One of the cornerstones of outdoor cooking is BBQ. BBQ is a method of cooking that roasts a protein over indirect heat for a long period of time typically using smoke as a flavoring agent. Cooking BBQ well is an art, which is why folks invest thousands in cooking rigs and compete in cook-offs at rodeos. The weapon of choice for BBQ’ing is a tool called the smoker.

System Overview — SiteWhere 0.9.6 documentation This guide is intended to provide a high-level understanding of what SiteWhere does and how it is implemented. What is SiteWhere? SiteWhere is an open source M2M integration platform – a system that choreographs data coming from and going to a web of connected devices. It provides the following functionality: Supplies a server based on proven technologies that acts as a controller for the processing of device data.