Relays. My Raspberry Pi Pool Timer — Why. (There will be more parts.) 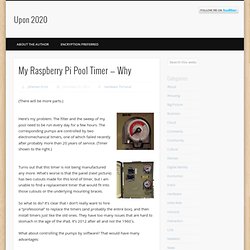 Here’s my problem: The filter and the sweep of my pool need to be run every day for a few hours. The corresponding pumps are controlled by two electromechanical timers, one of which failed recently after probably more than 20 years of service. (Timer shown to the right.) My Raspberry Pi Pool Timer Project — Bill of Materials. (Previously I discussed the the why of this project, the parts I selected to build with, setting up the Raspberry Pi itself, the electronic assembly, the mechanical assembly in the backyard, and the Rasptimer software I wrote for it.) 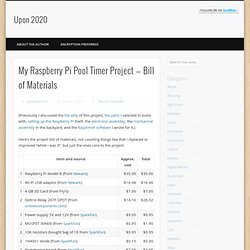 Here’s the project bill of materials, not counting things like that I replaced or improved “while I was it”, but just the ones core to the project: Not a bad price. I note that Leslie’s sells mechanical timers for pump control at $77.99 each. If I had used those, I also would have had to pay for the custom faceplate, and the total would have been $175.98, which is slightly more. But with none of the goals that I set out for the project, like remote control, or adaptive scheduling. Now all that’s left to do is to create a video showing the system in action… Swimming pool control with Linux. Swimming pool control with Linux Have a comment or question on my pool control projects? 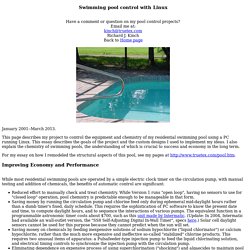 Email me at:kinch@truetex.com Richard J. Kinch Back to Home page January 2001--March 2013. This page describes my project to control the equipment and chemistry of my residential swimming pool using a PC running Linux. For my essay on how I remodeled the structural aspects of this pool, see my pages at Improving Economy and Performance While most residential swimming pools are operated by a simple electric clock timer on the circulation pump, with manual testing and addition of chemicals, the benefits of automatic control are significant: Reduced effort to manually check and treat chemistry. Building the System, Version 1 "Version 1" of this system is designed merely to turn the circulation pump and chlorine pump on and off, but using an elaborate schedule programmed in software. Much of the problem of the old system followed from having electrical controls in this pit.

Playground.arduino.cc/uploads/Learning/relays.pdf. Arduino Pool Control Code. Pool Control Phase I: Electrical Control. Phase I: Electrical control This is really the meat and potatoes part of the mission. The original reason I was able to justify this project was due to a broken timer, thus the very first thing to get to work is electronic timing of pool controls. In order to do that you need at a minimum, a properly programmed arduino, a properly developed protoshield, and the contactors properly wired to your pool equipment.

The reader here is expected to improvise some things and understand everything enough to purchase what is necessary for their particular implementation. I'm going to describe my implementation and steps of completion. The very first thing you should do is buy a Linksys NSLU2. When you get the device, the first thing you should do is configure it to a static IP using the included software. NOTE: Make SURE to not fill your 8MB flash filesystem of the NSLU2. . - Format and partition your flash key - Add the new root to your /etc/ipkg.conf file (add "dest sda1 /media/sda1" to the bottom.