Heimcontrol.js - Home automation in Node.js with Raspberry PI and Arduino 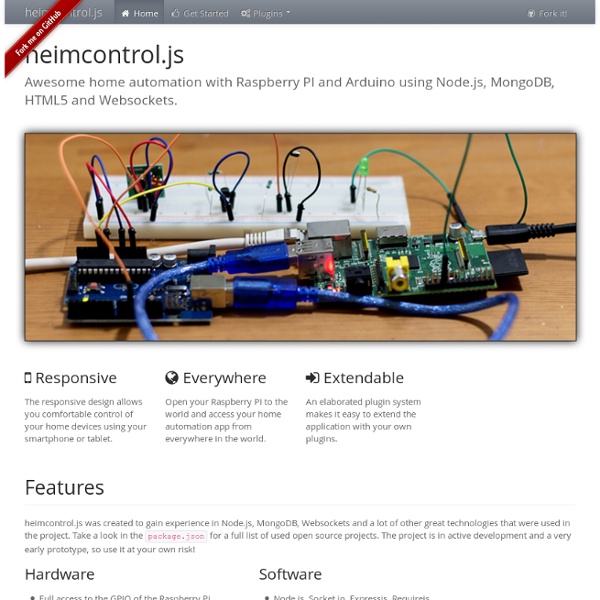 Home Automation with AngularJS and node.js on a Raspberry Pi In this blog post I show how you can quickly setup and implement a control software for your switches at home with some modern JavaScript stuff. This project should primarily help me to get more in touch with these kinds of freaky scripting and this is maybe helpful for other Java Developers or people who want to play around with the Raspberry Pi. So I decided to share it with you. There is no line of old-fashioned Java code here, but maybe some really technical C++-code ;-). Prerequisites You need the following Hardware to do it: When you just want to play around with AngularJS and you have no Raspberry Pi, then you can skip the first steps and just use the mock implementation of the REST server at apiary.io. Install the Raspberry Pi Hardware Before we can start hacking we need to connect the 433 MHz Sender to the GPIO pins of the Raspberry Pi like in the following picture: PIN 1 GND -> PIN 6 (GND) PIN 2 Data in -> PIN 11 (GPIO17) PIN 3 Vcc -> PIN 2 (5V) PIN 4 -> Antenna Install wiringPi

SmartHome The project has been created. The Eclipse SmartHome project is a proposed open source project under the Eclipse Technology Top-Level Project. This proposal is in the Project Proposal Phase (as defined in the Eclipse Development Process) and is written to declare its intent and scope. Background Since the emergence of broadband internet connections, smartphones and tablets the smart home market shows a remarkable upsurge. Scope The goals of the Eclipse SmartHome project can be summarized as: Provide a flexible framework for smart home and ambient assisted living (AAL) solutions. Description The Eclipse SmartHome project is a framework that allows building smart home solutions that have a strong focus on heterogeneous environments, i.e. solutions that deal with the integration of different protocols or standards. The stack is meant to be usable on any kind of system that can run an OSGi stack - be it a multi-core server, a residential gateway or a Raspberry Pi. Why Eclipse? Initial Contribution

OpenHAB coming to Eclipse as Eclipse SmartHome Yesterday at EclipseCon, Kai Kreuzer gave a presentation (slides) of OpenHAB, which is a server component for integrating in smart appliances and devices in a home setting and providing a general control mechanism which can be driven from mobile devices, web applications, or scripting systems. Although OpenHAB was an open-source project initially licensed under the GPL, it has been re-licensed under EPL in preparation for its Move to Eclipse SmartHome. The project provides a Java-based server (which was shown running on a Raspberry Pi at EclipseCon) and which binds to over 40 different bindings, including ModBus, Asterisk, Philips hue, Samsung and many more. SmartHome is aimed to provide a simple drop-in server where components can be connected and driven from a user interface, whilst allowing a general mechanism to control all components. There is a demo available, and the Eclipse SmartHome review is scheduled for the end of next week.