Skill shift: Automation and the future of the workforce. Demand for technological, social and emotional, and higher cognitive skills will rise by 2030. 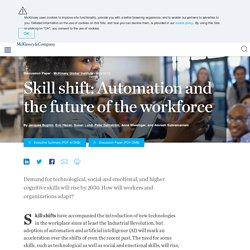 How will workers and organizations adapt? Skill shifts have accompanied the introduction of new technologies in the workplace since at least the Industrial Revolution, but adoption of automation and artificial intelligence (AI) will mark an acceleration over the shifts of even the recent past. The need for some skills, such as technological as well as social and emotional skills, will rise, even as the demand for others, including physical and manual skills, will fall. These changes will require workers everywhere to deepen their existing skill sets or acquire new ones. G7 Employment and Innovation Ministers prepare for jobs of the future  March 28, 2018 - Montreal, Quebec Innovation is changing how we live and work, bringing with it new opportunities and challenges for Canada and its Group of Seven (G7) partners. 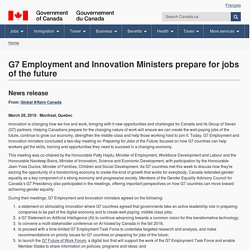 Helping Canadians prepare for the changing nature of work will ensure we can create the well-paying jobs of the future, continue to grow our economy, strengthen the middle class and help those working hard to join it. Today, G7 Employment and Innovation ministers concluded a two-day meeting on Preparing for Jobs of the Future, focused on how G7 countries can help workers get the skills, training and opportunities they need to succeed in a changing economy. This meeting was co-chaired by the Honourable Patty Hajdu, Minister of Employment, Workforce Development and Labour and the Honourable Navdeep Bains, Minister of Innovation, Science and Economic Development, with participation by the Honourable Jean-Yves Duclos, Minister of Families, Children and Social Development. Quotes.

A key player in China and the EU's 'third industrial revolution' describes the economy of tomorrow. Experts on the Future of Work, Jobs Training and Skills. As robots, automation and artificial intelligence perform more tasks and there is massive disruption of jobs, experts say a wider array of education and skills-building programs will be created to meet new demands. 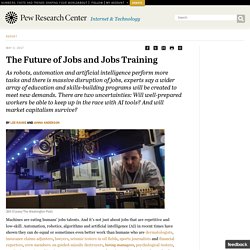 Will Robots Take Our Children’s Jobs? The chatbots taking over government: what jobs can they do? Any North Charleston residents who took out their trash in September 2017 may have been surprised to find a poster on their bin inviting them to text a robot. 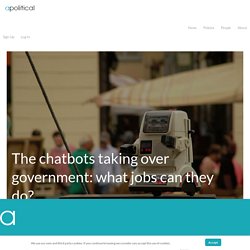 By messaging “hello” to 843-806-0204, they would become the latest participants in a new form of technology used by governments across the US, Singapore, and even the small English Channel island of Jersey. Chatbots are artificial intelligence systems designed to understand human messages and respond to their enquiries. Possibly Elon Musk's Biggest Idea Yet - Revolutionizing Education. The mega trends that continue to reshape the workplace around the world. Get Ready for Technological Upheaval by Expecting the Unimagined - NYTimes.com.

Preparing for the unknown is not as hard as it may seem, though it implies fundamental shifts in our policies on education, employment and social insurance. 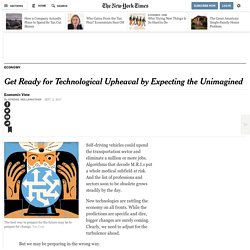 Take education. Were we to plan for specific changes, we would start revamping curriculums to include skills we thought would be rewarded in the future. Report: Canadian job opportunities in AI have grown by nearly 500% As Canada’s tech ecosystem continues to see a rise in AI and machine learning startups — and as the Canadian government and institutions allocate more funding towards AI research — there’s potential for Canada to become a global leader in the space. 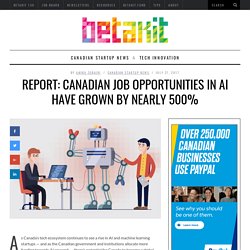 It’s also creating a wealth of new job opportunities for tech workers. A new report by job search site Indeed.com has found that since June 2015, AI and machine learning job opportunities, as a share of all job opportunities in Canada, have grown by nearly 500 percent. The Indeed.com report reflects a study that looked at the share of job postings and searches (per one million postings and searches) using the terms “artificial intelligence” and “machine learning” between June 2015 and June 2017. IoT and the Government – Intelligent Cities – Medium. Development of new technology especially the Internet of Things has integrated itself into different fields, sectors and businesses. 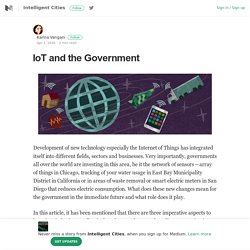 Very importantly, governments all over the world are investing in this area, be it the network of sensors — array of things in Chicago, tracking of your water usage in East Bay Municipality District in California or in areas of waste removal or smart electric meters in San Diego that reduces electric consumption. What does these new changes mean for the government in the immediate future and what role does it play. In this article, it has been mentioned that there are three imperative aspects to keep in mind. We are still waiting for the robot revolution. We are still waiting for the robot revolution The cash machine turned 50 this week — old enough, I think, to teach us a few lessons about the dawning of a new machine age. 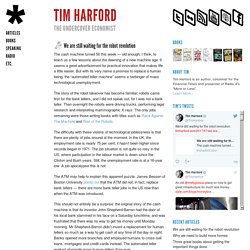 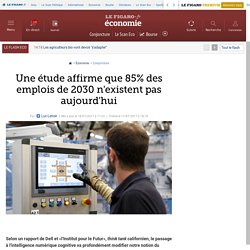 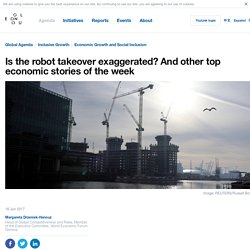 Is the robot takeover exaggerated? (Bloomberg) Image: Economic Policy Institute via Bloomberg Kenneth Rogoff’s critical view about the future of the Eurozone amid positive developments for the continent. Augmented reality is already changing the way we work. Here's the proof. Will VR Ever Be Mass Entertainment? Launch of the 2017 Employment Outlook. Remarks by Angel Gurría OECD Secretary-General Berlin, Germany, 13 June 2017. IBM, a Pioneer of Remote Work, Calls Workers Back to the Office - WSJ. Google wants to use its search power and machine learning to help more people find jobs. Your next job may come courtesy of Google. Google for Jobs, announced at Google's I/O developer conference in Mountain View, CA on Wednesday, will use machine learning to collect and organize millions of job postings from across the internet to better connect employers and job seekers. "Google for Jobs is our commitment to use our products to help people find work," said Google CEO Sundar Pichai in the first keynote address.

Will automation take away all our jobs? iStock Here’s a startling fact: in the 45 years since the introduction of the automated teller machine, those vending machines that dispense cash, the number of human bank tellers employed in the United States has roughly doubled, from about a quarter of a million in 1970 to a half a million today, with 100,000 added since the year 2000. These facts, revealed in Boston University economist James Bessen’s recent book Learning by Doing, raise an intriguing question: What are all those tellers doing, and why hasn’t automation eliminated their employment by now?

Automation will have a bigger impact on jobs in smaller cities. Atlassian Futurist Sees Teamwork, not Chatbots, Defining the Future of Work - The New Stack. It’s not news that artificial intelligence (AI) will probably change our jobs in pretty fundamental ways. Three Major Reasons Automation Won't Leave You Unemployed. In the workplace of the future, these are the skills employers want. China is rapidly making robots that will one day manufacture everything you buy — Quartz. Economists May Be Underestimating How Fast the Robots Are Coming - Bloomberg.