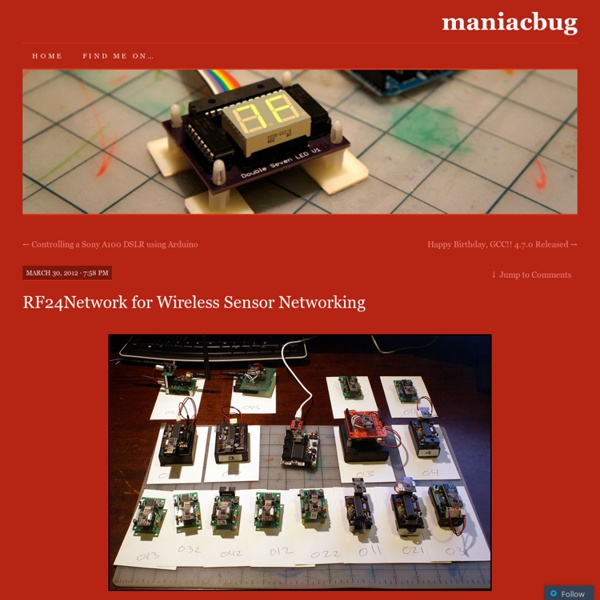 RF24Network is a network layer for Nordic nRF24L01+ radios running on Arduino-compatible hardware. It’s goal is to have an alternative to Xbee radios for communication between Arduino units. It provides a host address space and message routing for up to 6,000 nodes. Today, I managed to get 17 nodes running on a single network. Hardware The fastest way to get RF24Network-compatible hardware is to build the Getting Started board, or the ProtoShield board as explained in other posts, attached to commercially-available Arduino. Ultimately, I wanted something smaller, cheaper and more power-efficient, so I built a Low Power Wireless Sensor Node. Simple Transmit/Receive The Hello World examples illustrate how simple it is to communicate between two nodes. There are three simple sections: Static Initialization First, the static setup to prepare the radio, and set the addresses. setup() Second, the ‘setup()’ simply prints out a quick salutation, and initializes the radio layers. Transmitter loop()

tinyUSBboard Arduino compatible without extra programmer and/or FTDI chip (USB<->serial) needed! Plus exchangeable bootloader! New! New! New! ...Some kits are also available at ebay News! Do you have some ideas for further example firmwares - or even completed ones already? Infopage Introduction - What is tinyUSBboard? TinyUSBboard is an Arduino compatible, minimalistic and cheap AVR microprocessor board with USB interface and simple "do it yourself" capability. While normal handling with microcontrolling units (MCUs) needs additional equipment, tinyUSBboard only needs a Mac-, Windows- or Linux computer with a single free USB socket. The board (see photo and layout) in form of a regular stick (approx. 2.5cm x 8.0cm) uses an ATmega8-16PU MCU, clocked at 16MHz. Of course it is possible to use tinyUSBboard with other microcontrollers (for example ATmega328), too. Three of the MCUs pins (PIN2, PIN12 and PIN13) are actually used for the USB interface. Furthermore, there are five LEDs on the board. Firmwares

Smartenit adds the sweetness of Linux Home Automation to Raspberry Pi making it HomAidPi à la mode HomAidPi-Press PRLog (Press Release) - Jul. 26, 2012 - San Juan Capistrano, CA Smartenit, Inc. There is nothing as tasty as homemade raspberry pie in the summer, and the ice cream on top makes it even more delicious, especially when it’s free. To enable access of the HomAidPi™ from anywhere, Smartenit provides client applications for web browsers and mobile devices. This appetizing HomAidPi offers users the ability to seamlessly monitor and control appliances using three of the most prevalent automation protocols: ZigBee, INSTEON and X10. “We are happy to satisfy the craving of home automation enthusiasts with a solid-value gateway solution. Raspberry Pi is a Trademark of the Raspberry Pi Foundation Smartenit: Monitor and Control Anything from AnywhereSmartenit, Inc. Photo:

Indoor plant ideas to give your home a green makeover! - Scale Inch One of the prime features to add a refreshing feel to the space is to welcome home indoor plants that instantaneously change the ambiance and add a potency to make your home look absolutely perfect. The greenery re-energizes the home interior and gives a hygiene and healthier environment. Having plants inside your home not just adds creative look but also adds tranquil effect to the space which in turn brings home charm that intensifies absolutely flawless home interiors. Interior Designers in Bangalore | Scale Inch Revamp your kitchen with natural decors The cooking area can be integrated with decors like flower pots, a garden can be created below the windows having to possess an outright kitchen with fresh and natural décor that gets home an elegant effect. Fill the corners of your home with plants Place the plants in the corner of each room or hang the planters in the available space. Deck up your hall with planters The entrance of your house must be welcoming and pleasant.

RF24Network: Network Layer for RF24 Radios This class implements an OSI Network Layer using nRF24L01(+) radios driven by the RF24 library. Purpose/Goal Create an alternative to ZigBee radios for Arduino communication. Xbees are excellent little radios, backed up by a mature and robust standard protocol stack. They are also expensive. For many Arduino uses, they seem like overkill. Please see the Comparison to ZigBee page for a comparison against the ZigBee protocols Features The layer provides: Host Addressing. The layer does not (yet) provide: Fragmentation/reassembly. How to learn more Topology for Mesh Networks using nRF24L01(+) This network layer takes advantage of the fundamental capability of the nRF24L01(+) radio to listen actively to up to 6 other radios at once. Octal Addressing Each node must be assigned an 15-bit address by the administrator. Node 00 is the base node. How routing is handled When sending a message using RF24Network::write(), you fill in the header with the logical node address. Starting up a node Directionality