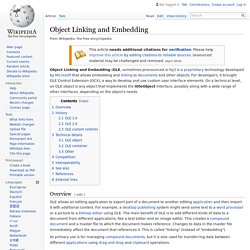 For developers, it brought OLE Control Extension (OCX), a way to develop and use custom user interface elements. On a technical level, an OLE object is any object that implements the IOleObject interface, possibly along with a wide range of other interfaces, depending on the object's needs. Overview[edit] OLE allows an editing application to export part of a document to another editing application and then import it with additional content. For example, a desktop publishing system might send some text to a word processor or a picture to a bitmap editor using OLE.

IDispatch. The Automation (IDispatch) interface allows a client application to find out what properties and methods are supported by an object at run-time, i.e. implements the concept of RTTI. 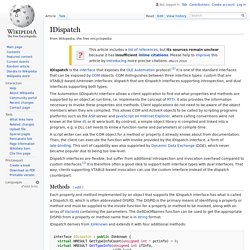 It also provides the information necessary to invoke these properties and methods. Client applications do not need to be aware of the object members when they are compiled. This allows COM and ActiveX objects to be called by scripting programs platforms such as the ASP server and JavaScript on Internet Explorer, where calling conventions were not known at the time IIS or IE were built. By contrast, a simple object library is compiled and linked into a program, e.g. a DLL call needs to know a function name and parameters at compile time. A script writer can ask the COM object for a method or property it already knows about from documentation. OLE Automation. In Microsoft Windows applications programming, OLE Automation (later renamed to simply Automation[1][2]) is an inter-process communication mechanism created by Microsoft. 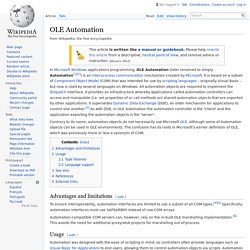 It is based on a subset of Component Object Model (COM) that was intended for use by scripting languages – originally Visual Basic – but now is used by several languages on Windows. All automation objects are required to implement the IDispatch interface. Dynamic Data Exchange. History[edit] Dynamic Data Exchange was first introduced in 1987 with the release of Windows 2.0 as a method of interprocess communication so that one program could communicate with or control another program, somewhat like Sun's RPC (Remote Procedure Call).[1] It used the "Windows Messaging Layer" functionality within Windows. 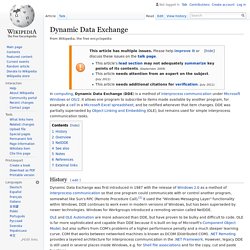 DDE continues to work even in modern versions of Windows, but has been superseded by newer technologies. Windows for Workgroups introduced a remoting version called NetDDE. OLE and OLE Automation are more advanced than DDE, but have proven to be bulky and difficult to code. Interprocess Communication (Programming Concepts) ABAP. Introduction[edit] ABAP is one of the many application-specific fourth-generation languages (4GLs) first developed in the 1980s. 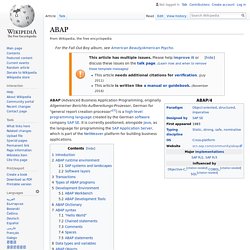 It was originally the report language for SAP R/2, a platform that enabled large corporations to build mainframe business applications for materials management and financial and management accounting. ABAP used to be an abbreviation of Allgemeiner BerichtsAufbereitungsProzessor, German for "generic report preparation processor", but was later renamed to the English Advanced Business Application Programming. ABAP was one of the first languages to include the concept of Logical Databases (LDBs), which provides a high level of abstraction from the basic database level(s).

The ABAP language was originally used by developers to develop the SAP R/3 platform. APL (programming language) Promotional material for APL from 1976 Applied mathematics is largely concerned with the design and analysis of explicit procedures for calculating the exact or approximate values of various functions. 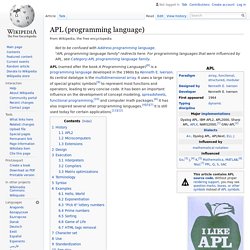 Such explicit procedures are called algorithms or programs. Because an effective notation for the description of programs exhibits considerable syntactic structure, it is called a programming language. In 1960, he began work for IBM and, working with Adin Falkoff, created APL based on the notation he had developed. This notation was used inside IBM for short research reports on computer systems, such as the Burroughs B5000 and its stack mechanism when stack machines versus register machines were being evaluated by IBM for upcoming computers. As early as 1962, the first attempt to use the notation to describe a complete computer system happened after Falkoff discussed with Dr. C (programming language)

We ask you, humbly, to help. 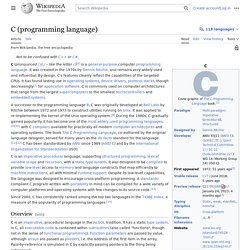 Hi reader in Canada, it seems you use Wikipedia a lot; that's great! It's a little awkward to ask, but this Tuesday we need your help. We’re not salespeople. We’re librarians, archivists, and information junkies. We depend on donations averaging $15, but fewer than 1% of readers give. C++ General-purpose programming language History[edit] Bjarne Stroustrup, the creator of C++, in his AT&T New Jersey office c. 2000. 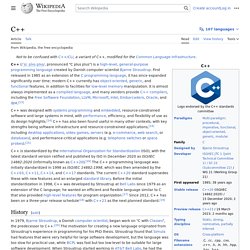 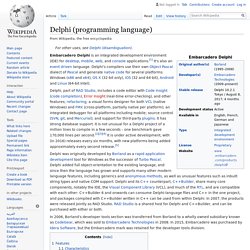 Delphi added full object-orientation to the existing language, and since then the language has grown and supports many other modern language features, including generics and anonymous methods, as well as unusual features such as inbuilt string types and native COM support. Delphi and its C++ counterpart, C++Builder, share many core components, notably the IDE, the Visual Component Library (VCL), and much of the RTL, and are compatible with each other: C++Builder 6 and onwards can consume Delphi-language files and C++ in the one project, and packages compiled with C++Builder written in C++ can be used from within Delphi. In 2007, the products were released jointly as RAD Studio. 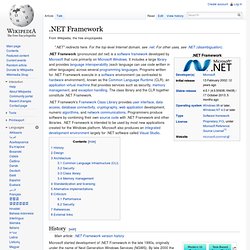 Object REXX. Object REXX supports multiple inheritance via the use of mixin classes. References[edit] External links[edit] Perl. Though Perl is not officially an acronym,[5] there are various backronyms in use, such as: Practical Extraction and Reporting Language.[6] Perl was originally developed by Larry Wall in 1987 as a general-purpose Unix scripting language to make report processing easier.[7] Since then, it has undergone many changes and revisions. The latest major stable revision of Perl 5 is 5.18, released in May 2013.

Perl 6, which began as a redesign of Perl 5 in 2000, eventually evolved into a separate language. Both languages continue to be developed independently by different development teams and liberally borrow ideas from one another. PHP. Server-side scripting language PHP: Hypertext Preprocessor (or simply PHP) is a server-side scripting language designed for Web development. It was originally created by Rasmus Lerdorf in 1994;[4] the PHP reference implementation is now produced by The PHP Group.[5] PHP originally stood for Personal Home Page,[4] but it now stands for the recursive initialism PHP: Hypertext Preprocessor.[6] The standard PHP interpreter, powered by the Zend Engine, is free software released under the PHP License. PowerBuilder. PowerBuilder is an integrated development environment owned by Sybase, a division of SAP.

It has been in use since 1991, peaking around 1998 with around 100,000 users.[1] In May of 2015 SAP announced that Appeon would take over future development and marketing of PowerBuilder while Intellectual Property would remain with SAP.[2] While Powerbuilder's market share has diminished, many applications created with it are still in use. In 2010, Sybase released a major upgrade to PowerBuilder with support for the Microsoft .NET Framework.[3] Originally announced as PowerBuilder 15, PowerBuilder 12.6 was released in August 2014. Features include OData support, dockable windows, and 64-bit native applications in PowerBuilder Classic.[4]

Python (programming language) General-purpose, high-level programming language. Ruby (programming language) Following the release of Ruby 0.95 in 1995, several stable versions of Ruby were released in the following years: Ruby 2.0 added several new features, including: Tcl. Tcl (originally from Tool Command Language, but conventionally spelled "Tcl" rather than "TCL"; pronounced as "tickle" or "tee-see-ell"[4]) is a scripting language created by John Ousterhout.[5] Originally "born out of frustration",[6] according to the author, with programmers devising their own languages intended to be embedded into applications, Tcl gained acceptance on its own.