10 Ways To Make Evernote Rock Harder. I used to keep notes and information in various places around the Web and on my devices: Google Drive, the Notes app on my iPhone, to-do list apps, notes scribbled on Post-It’s and notepads, notes and sketches digitally scrawled into iPad apps like Paper and Penultimate. 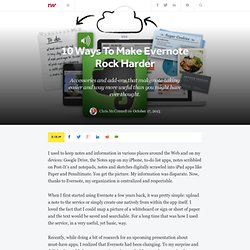 You get the picture. My information was disparate. Now, thanks to Evernote, my organization is centralized and respectable. When I first started using Evernote a few years back, it was pretty simple: upload a note to the service or simply create one natively from within the app itself. I loved the fact that I could snap a picture of a whiteboard or sign or sheet of paper and the text would be saved and searchable.

Recently, while doing a bit of research for an upcoming presentation about must-have apps, I realized that Evernote had been changing. Here are some of the best. Scansnap Evernote Edition Scanner. Evernote: A 0-to-60 MPH Guide. Evernote is many things to many people because it’s so powerful. 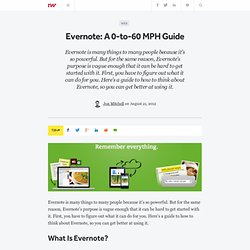 But for the same reason, Evernote’s purpose is vague enough that it can be hard to get started with it. First, you have to figure out what it can do for you. Here’s a guide to how to think about Evernote, so you can get better at using it. What Is Evernote? Evernote is an application that lets you create notes that sync between all your devices. Evernote has amazing search powers. The free version is already pretty powerful, but for $45.00 per year, you can upload up to 1GB per month, attach up to 50MB of just about anything to an individual note, you can go back in time and view past versions of notes, search inside PDFs and more. A “note” in Evernote can be text only, or it can include photos, audio or other attachments.

Evernote allows for two levels of organization of individual notes. There are also a couple of tricks. So Evernote is clearly powerful. Evernote Is Your Digital Desk Drawer. Drafts for iPhone: Write First, Then Act. Drafts is a new starting point for typing anything on an iPhone. 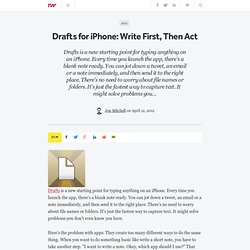 Every time you launch the app, there's a blank note ready. Fetch and Push Notes from Dropbox - the poor man's sync. Updated on: October 26, 2013 at 16:00 Dropbox is indispensable on iOS. 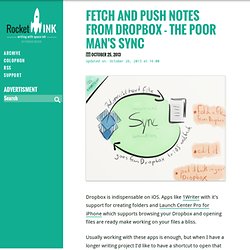 Apps like 1Writer with it’s support for creating folders and Launch Center Pro for iPhone which supports browsing your Dropbox and opening files are ready make working on your files a bliss. Usually working with these apps is enough, but when I have a longer writing project I’d like to have a shortcut to open that particular file in my editor of choice and if I’m done I’d like to sync the changes back. Phillip Gruneich - Exporting Actions to Drafts…from your Mac. How many countless days I was on the couch, swiping through my Instapaper and Fever and someone posted a great action for Drafts. 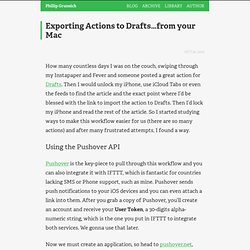 Then I would unlock my iPhone, use iCloud Tabs or even the feeds to find the article and the exact point where I’d be blessed with the link to import the action to Drafts. Then I’d lock my iPhone and read the rest of the article. So I started studying ways to make this workflow easier for us (there are so many actions) and after many frustrated attempts, I found a way. Using the Pushover API Pushover is the key-piece to pull through this workflow and you can also integrate it with IFTTT, which is fantastic for countries lacking SMS or Phone support, such as mine.

Now we must create an application, so head to pushover.net, check your dashboard and create a new application/plugin. Automating iOS: How Pythonista Changed My Workflow. iOS Automation and Workflows with Drafts. The latest update to Drafts – a “quick note capturing” app that I’ve covered several times on MacStories – adds a series of features aimed at increasing the possibilities of workflows automation on iOS devices. 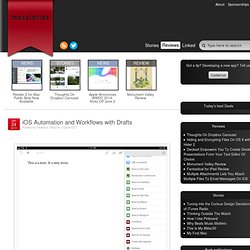 Obviously, this is something I’m interested in. It seems like enabling users to save time while using apps has been a common thread in the past few months. The success of Launch Center Pro probably “raised awareness” in regards to the whole concept of URL schemes, but it’s been the increased adoption of x-callback-url and interest in automated workflows that proves better inter-app communication is something that (at least) third-party developers are thinking about. Google included a powerful URL scheme in Google Maps and Google Chrome; more recently, Mr. How to Quickly Launch Apps With Siri. One of the glaring features that Apple left out of Siri is the ability to integrate with and launch apps. 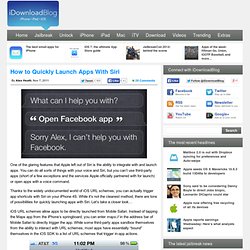 You can do all sorts of things with your voice and Siri, but you can’t use third-party apps (short of a few exceptions and the services Apple officially partnered with for launch) or open apps with a voice command. Thanks to the widely undocumented world of iOS URL schemes, you can actually trigger app shortcuts with Siri on your iPhone 4S. While it’s not the cleanest method, there are tons of possibilities for quickly launching apps with Siri. 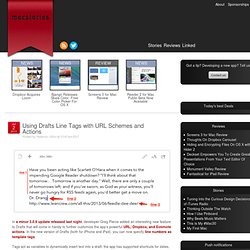 In the new version of Drafts (both for iPhone and iPad), you can now specify line numbers as template tags. Tags act as variables to dynamically insert text into a draft: the app has supported shortcuts for dates, timestamps, system clipboard, and body of a draft for quite a while now, but it lacked a way to break content into lines. In older versions, Drafts could only differentiate between the entire note, the first line, or everything after the first line; there was no way to tell the app to treat, for instance, the second line and fifth line differently.

With Drafts 3.0.6, you have complete control over the lines of your draft through a simple [[line|n]] format, where n is the number of the line. Javascript:window.location=' New flexible timestamps in Drafts. February 10th, 2013 at 6:13 pm by Dr. 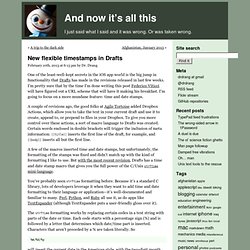 Drang One of the least-well-kept secrets in the iOS app world is the big jump in functionality that Drafts has made in the revisions released in last few weeks. Automation. In post published yesterday on the Editorial forums, developer Ole Zorn shared more details on Editorial 1.1, announcing some features he's been working on for the update, such as the ui module, which will allow users to create custom interfaces inside Editorial: 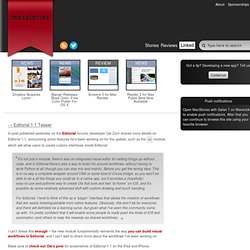 First Look at Editorial for iPad. I tweeted earlier today that I've registered the name for a new app in iTunes Connect. It's called Editorial, and I've actually been working on this for over a year now. It's not completely done yet, but I think that I'm pretty close to the finish line. I'll share more details over the next few weeks, but for now, I hope the screenshots below already give you a basic idea of what the app will be like. If this looks interesting to you, you should follow me on Twitter. Launch Center Pro 1.1. Released in December 2011, App Cubby’s Launch Center re-ignited interest in iOS URL schemes – shortcuts to automate communication between apps and get specific things done faster with less manual tapping and interactions.

Its direct sequel, Launch Center Pro, was released in the summer of 2012 and doubled down on the entire idea of automating iOS tasks by providing a “Home screen for your actions” to allow users to better and more visually organize their shortcuts. Action Composer I’d start with the Action Composer, which has been completely redesigned in version 1.1. It used to be that, upon creating a new action, Launch Center Pro would offer a single list of system actions and third-party apps that had URL schemes you could use in the app.