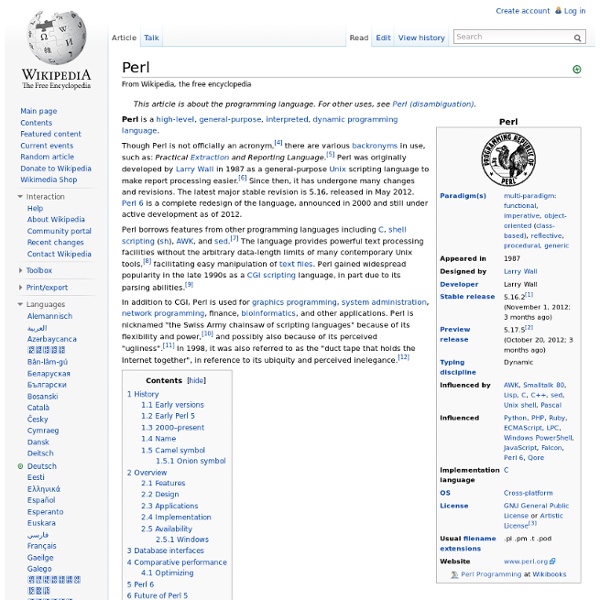 Though Perl is not officially an acronym,[5] there are various backronyms in use, such as: Practical Extraction and Reporting Language.[6] Perl was originally developed by Larry Wall in 1987 as a general-purpose Unix scripting language to make report processing easier.[7] Since then, it has undergone many changes and revisions. The latest major stable revision of Perl 5 is 5.18, released in May 2013. Perl 6, which began as a redesign of Perl 5 in 2000, eventually evolved into a separate language. Both languages continue to be developed independently by different development teams and liberally borrow ideas from one another. History[edit] Early versions[edit] Wall began work on Perl in 1987, while working as a programmer at Unisys,[9] and released version 1.0 to the comp.sources.misc newsgroup on December 18, 1987.[14] The language expanded rapidly over the next few years. Perl 2, released in 1988, featured a better regular expression engine. Early Perl 5[edit] 2000–present[edit] Name[edit]

Perl programming documentation C Sharp (programming language) C♯ is intended to be a simple, modern, general-purpose, object-oriented programming language.[6] Its development team is led by Anders Hejlsberg. The most recent version is C♯ 5.0, which was released on August 15, 2012. The ECMA standard lists these design goals for C#:[6] Due to technical limitations of display (standard fonts, browsers, etc.) and the fact that the sharp symbol (U+266F ♯ music sharp sign (HTML: &#9839;)) is not present on the standard keyboard, the number sign (U+0023 # number sign (HTML: &#35;)) was chosen to represent the sharp symbol in the written name of the programming language.[8] This convention is reflected in the ECMA-334 C# Language Specification.[6] However, when it is practical to do so (for example, in advertising or in box art[9]), Microsoft uses the intended musical symbol. C# used to have a mascot called Andy (named after Anders Hejlsberg). It was retired on Jan 29, 2004.[25] C# has the following syntax:

Perl Maven - for people who want to get the most out of programming in Perl C# Programming C sharp musical note Introduction[edit] Main introduction: C Sharp Programming/Foreword Foreword A description of the C# language and introduction to this Wikibook. Getting started with C# A simple C# program and where to get tools to compile it. Basics[edit] Basic syntax Describes the basics in how the applications you write will be interpreted. Naming conventions Quickly describes the generally accepted naming conventions for C#. Variables The entities used to store data of various shapes. Operators Summarizes the operators, such as the '+' in addition, available in C#. Data structures Enumerations, structs, and more. Control statements Loops, conditions, and more. Exceptions Responding to errors that can occur. Classes[edit] Namespaces Giving your code its own space to live in. Classes The blueprints of objects that describes how they should work. Objects Cornerstones of any object-oriented programming language, objects are the tools you use to perform work. Encapsulation and accessor levels Inheritance Generics

Damien Learns Programming: Launch your Perl script from Notepad++ Today I am going to explain how you can be using Notepad++ to run Perl scripts. It can be convenient to launch your program directly from the editor's environment to quickly check that it compiles. Let's try and set up Notepad++ to launch the script from Wednesday's post. In the Plugins menu, you will find the NppExec plugin.Select Plugins>NppExec>Execute... You can also use the convenient F6 shortcut. Once the Execute... window is open, type in the following command:perl "$(FULL_CURRENT_PATH)"$(FULL_CURRENT_PATH) is an internal Notepad++ variable that contains the full path of the file currently open in the editor. You can save this command line and give it a meaningful name ('perl' for example). The output result is visible on the Console window. You can get rid of the "Process..." lines by selecting Plugins>NppExec>No Internal Message Also, if you want to repeat the previous command, you can just type Ctrl+F6. If you know more Notepad++ tips, I'd love to hear from you! Come on, try it!