Sentient code: An inside look at Stephen Wolfram's utterly new, insanely ambitious computational paradigm. In 2002 Stephen Wolfram released A New Kind of Science and immediately unleashed a firestorm of wonder, controversy, and criticism as the British-born scientist, programmer, and entrepreneur overturned conventional ideas on how to pursue knowledge. 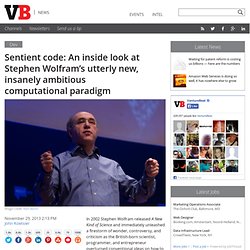 Earlier this month, he teased something with the capacity to create as much passion — and, likely, much more actual change — in the world of programming, computation, and applications. Today, Wolfram gave me a glimpse under the hood in an hour-long conversation. And I have to say, what I saw was amazing. An army of robot baristas could mean the end of Starbucks as we know it. Starbucks’ 95,000 baristas have a competitor. 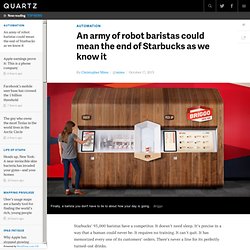 It doesn’t need sleep. It’s precise in a way that a human could never be. It requires no training. It can’t quit. KN. Robotic Nation, by Marshall Brain. I went to McDonald's this weekend with the kids. 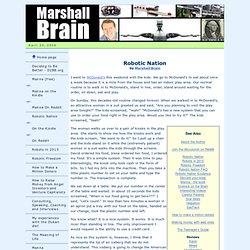 We go to McDonald's to eat about once a week because it is a mile from the house and has an indoor play area. Our normal routine is to walk in to McDonald's, stand in line, order, stand around waiting for the order, sit down, eat and play. On Sunday, this decades-old routine changed forever. When we walked in to McDonald's, an attractive woman in a suit greeted us and said, "Are you planning to visit the play area tonight? " The kids screamed, "Yeah! " The woman walks us over to a pair of kiosks in the play area. We sat down at a table. You know what? As nice as this system is, however, I think that it represents the tip of an iceberg that we do not understand. The Iceberg The iceberg looks like this. All of these systems are very easy-to-use from a customer standpoint, they are fast, and they lower the cost of doing business and should therefore lead to lower prices. The next step was autonomous, humanoid robots.

Imagine this. 130613-autonomousjournalarticleupdated. You Should Be Afraid of Artificial Intelligence. I, for one, do not welcome our new robot overlords. 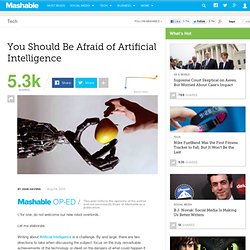 Who is deciding when a target should be engaged? Short answer: choose Disneyland. FUD Versus FAB Image: Steve Mann. Welcome, Robot Overlords. Please Don’t Fire Us? — We Live in the Future. If you have any kind of background in computers, you’ve already figured out that I didn’t pick these numbers out of a hat. 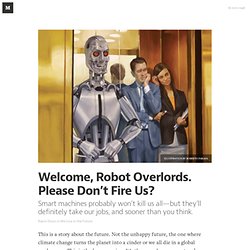 I started in 1940 because that’s about when the first programmable computer was invented. I chose a doubling time of 18 months because of a cornerstone of computer history called Moore’s Law, which famously estimates that computing power doubles approximately every 18 months. And I chose Lake Michigan because its size, in fluid ounces, is roughly the same as the computing power of the human brain measured in calculations per second.

In other words, just as it took us until 2025 to fill up Lake Michigan, the simple exponential curve of Moore’s Law suggests it’s going to take us until 2025 to build a computer with the processing power of the human brain. And it’s going to happen the same way: For the first 70 years, it will seem as if nothing is happening, even though we’re doubling our progress every 18 months. And that’s exactly where we are. Rise of the Robots. How Technology Is Destroying Jobs. Given his calm and reasoned academic demeanor, it is easy to miss just how provocative Erik Brynjolfsson’s contention really is. ­ 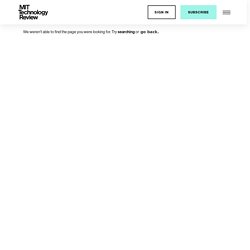