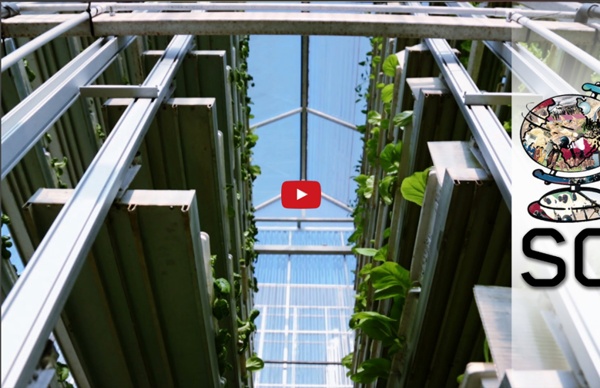 GMOs-Frankenfood-Mycoplasmas-Prion Disease How It's Made: Hot Dogs Home | About Us | Contact | Subscribe How It's Made: Hot Dogs Hi-Tech "Phude" "Unfit for Human Consumption." ForbiddenKnowldgeTV Alexandra Bruce September 17, 2013 Created by Gabriel Hoss, this show has been presented on the Science Channel in the US, on the Discovery Channel Canada in that country and on the Discovery Channel in the United Kingdom. A study at Harvard University determined that processed meats like hot dogs are "unfit for human consumption." This presentation may cause you to think twice, the next time you make a grab for a package of wieners. To purchase DVDs of the show please visit the official "How It's Made" website: For more GMOs-Frankenfood-Mycoplasmas-Prion Disease videos, click here See the complete catalog offorbidden knowledge tv videos About Us | Privacy Policy | Contact

Vertical farming: The next big thing for food—and tech As a concept, vertical farming has been around for decades, and thinkers like Columbia professor Dickson Despommier are credited with advancing the concept. Until recently, however, it was never economically viable. Even now, the concept has major drawbacks. "The challenge has been to make it commercially profitable," said Colangelo. Read MoreAg giants look to plant a seed to fight the drought Every project, he said, becomes more efficient as data is collected and the process improves. And that's why vertical farming is finally taking off now: New technology is driving down costs, just as consumers are increasingly seeking out locally sourced, all-natural foods. Lighting is one of the biggest expenditures. Farmers have discovered that a mix of red and blue LED diodes works best, since the colors optimize photosynthesis and require less energy than standard yellow light. Read MoreCargill contends with drought, floods and avian flu Big data and the software to collect it is also crucial.

Florida Surfer Rescues Drowning Loggerhead Sea Turtle On a good day, a surfer is one with the ocean waves. On a really good day, he’s a hero, too. Cocoa Beach, Florida -- A surfer came to the rescue of a loggerhead sea turtle that was tangled in fishing lines just south of the Cocoa Beach Pier this afternoon. The turtle's flippers were so entangled that it could be seen gasping for air from the ocean's surface as it struggled to free itself from the mono-filament. Seeing the marine reptile in distress, a nearby surfer paddled over to help the sea turtle while risking a possible bite from the animal. Loggerhead sea turtles have a bite force so powerful, that they can easily tear through a conch shell - a mainstay of the turtle's diet. After a few minutes, the surfer had completely untangled the sea turtle and it swam away. Loggerheads are considered an endangered species and are protected by the International Union for the Conservation of Nature.

index Kameoka, Japan (CNN) — The fields around the Spread factory in Kameoka, a satellite town west of the Japanese city of Kyoto, are scrubby and barren -- the farmers there have long since harvested the rice ahead of winter. While it doesn't generally get too cold in this part of Japan, the temperature drops enough to halt crop farming for four to five months. Inside the doors of the eerily high-tech facility it's business as usual, as masked workers glide around quietly but purposefully. They'll see a further 21,000 the following day, and the day after that too -- 7.7 million a year in fact. Spread harvests 21,000 heads of lettuce a day. Euan McKirdy/CNN Marrying agriculture and industry Spread is Japan's largest vertical farm, a unique blend of agriculture and industry, and its Kameoka factory grows and ships out produce -- for now four varieties of lettuce but potentially any kind of leafy vegetable -- year-round. Growing time, from seed to harvest, is a lean 40 days.

Jack Russell Terrier And Jaguar Are Best Pals Jack Russell Terrier and jaguar are inseparable friends A pint-sized Jack Russell terrier named Bullet and his buddy Jag (you guessed it, a jaguar) prove that even the greatest feline-canine differences can be overcome. According to a video by Barcroft TV, Jag met Bullet when he was brought to South Africa's Akwaaba Lodge and Predator Park. The resort is home to many domesticated African cats that interact with guests. Bullet became a source of comfort to Jag in the new environment and they've been inseparable ever since. Jaguars are large, powerful animals with very strong jaws that can even bite through turtle shells. Although jaguars are often tawny-colored, they can vary from reddish-brown to black. The term "jaguar" comes from the Native American word "yaguar", which means "he who kills with one leap." Young cubs are born blind and helpless. VIDEO Cute Dog and Jaguar Are Best Friends

Vertical farms: "Making nature better" PORTAGE, Indiana -- Do not be confused by the drab facade of the warehouse in this Northwest Indiana industrial park. It's a farm... and it could well be the future. They're called "vertical farms" -- The entire operation is indoors, and it's a trend that could turn urban areas into agricultural hotbeds. You'll find arugula and parsley, basil, kale and other greens that grace our plates. "We are growing nine varieties of lettuces,'' said Robert Colangelo, the founder of Green Sense Farms. Or you could call him Mr. "I guess. This is how he does it, with a pink light from a light-emitting diode, or LED "It gives you a very concentrated amount of light and burns much cooler. No sun? Researchers believe plants respond best to the blue and red colors of the spectrum, so the densely-packed plants are bathed in a pink and purple haze. "We take weather out of the equation," says Colangelo. This abundance keeps the prices consistent year-round at local groceries. © 2014 CBS Interactive Inc.

Dressed to live - Wildlife Styles (full documentary) FarmedHere, Nation's Largest Indoor Vertical Farm, Opens In Chicago Area (PHOTOS) Occupying 90,000 square feet of a formerly abandoned suburban Chicago warehouse, FarmedHere is not only the first indoor vertical farm of its kind in the nation — it’s also the largest. Celebrating its grand opening in Bedford Park, Ill., on Friday, FarmedHere utilizes a soil-free, aquaponic process to grow organic greens that are both tastier and more sustainable than traditional farming. Here’s how it works: Plants are grown in beds stacked as much as six high by using a mineral-rich water solution which is derived from tanks of hormone-free tilapia offering up nutrients to the plants in a controlled environment that ensures optimal growing. (Peek inside the Chicago-area facility below.) The facility hopes to produce an anticipated 1 million pounds of chemical-, herbicide- and pesticide-free leafy greens — including basil, arugula, mints and other greens — to the Chicago area once it hits full production.

Licked by a Wolf How do pain relievers work? - George Zaidan All those different brands, varieties, and strengths filling the shelves at the drugstore can give anyone a headache! While there may be a hundred different colored boxes and bottles on the shelf, Alice (of Go Ask Alice fame) explains the four basic types of non-prescription pain-relievers. One of the most strangest types of pain comes from hitting your “funny bone.” Mentalfloss writes that the "funny bone" is neither funny (when you whack it on the edge of a piece of furniture), nor a bone (whether you whack it or not). Where'd the name come from, and why is it so painful? What happens when you can’t feel pain?