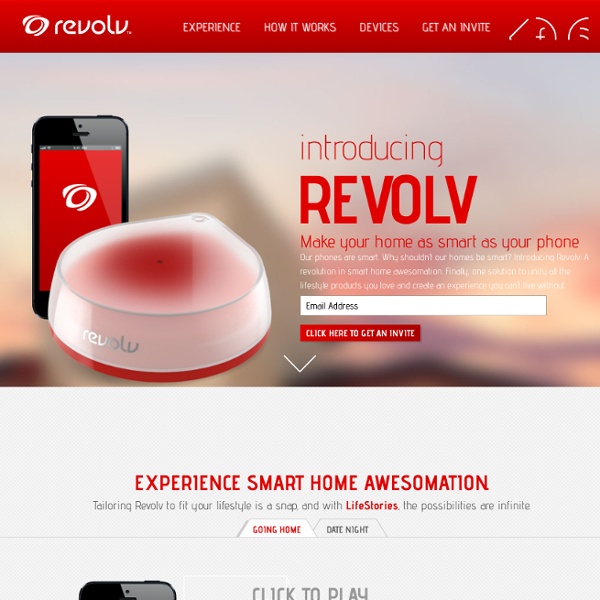 Parker Mobile Find open parking spaces… right now. Parker directs you to the closest available parking spots. Stop circling… start smiling. #ParkHappy. Smart Interaction Lab The Smart Interaction Lab is in the midst of exploring the link between design and emotion as it relates to dynamic behaviors, or expressions that can happen through light, sound and movement. In a series of blog posts and experiments we’ll be sharing some of our discoveries along the way. Mac Laptop: A simple pulsing from dim to bright captures the essence of breathing Objects can express emotion We all know that objects can communicate a lot of very human values through things like form and color. At Smart Design, we often talk about “form semantics” or how the shape of things can communicate something very emotional, such as a drill that looks “aggressive”, a skate that feels “serious”, or a toaster that is “friendly”. In the film Objectified, Chris Bangle talks about automotive design and how the front of a car can look like a smile.

Auto Advertising Startup adverCar Raises $2M From Canaan Partners, 1-800-Flowers, And Others AdverCar, a startup promising to make it easy for drivers to turn their vehicles into rolling advertisements, has raised a $2 million seed round. The funding was led by Canaan Partners, with participation from 1-800-Flowers, Branford Castle Private Equity, New Orleans Startup Fund, Jit Saxena, and the TiE Angels Boston. 1-800-FLOWERS CEO Jim McCann and Canaan partner Deepak Kamra are joining adverCar’s board of directors. Founder and CEO Neil Turner said there are other companies offering to wrap cars in advertising, but only adverCar has a solution that’s easy and affordable for advertisers. Wrapping a car in ads costs thousands of dollars, whereas adverCar mounts its ads as easily removable stickers that are the same size as standard ad units, and it charges around $280 for a monthlong campaign.

Watch This Stop-Motion Teardown Of A 3.2L Porsche Carrera Engine Please enable JavaScript to watch this video. It’s not until you’ve seen all the bits and pieces that make up a car engine that you realise just how much of a marvel it is. Well, at least for those of us with the automotive knowledge of a teabag. Even so, regardless of your level of expertise, I challenge you not to be enthralled by this deconstruction of a Porsche Carrera engine. Put together by Matthias Hoeing of Hoeing Sportmotoren, with the help of Filmkooperation, the video shows the first part of the engine’s transformation from neglected hunk of metal to hot-rodded beauty. According to Hoeing, the plan is to increase the output by a “modest” 100hp (74.5kW).

MetroMile Participants receive a Metronome, our smart little data device, which is free for as long as you use it. If you ever decide to stop, no problem - we'll make it easy to return. While you're waiting for your device to arrive, download our app in the meantime. Marketplace - ThingWorx Introducing the ThingWorx Marketplace™ Since its release in 2011, ThingWorx platform has offered companies a 10X reduction in the time it takes to build and deploy IoT/M2M applications. With the introduction of the ThingWorx Marketplace, ThingWorx users can expect another step change in further reducing the time, risk and effort it takes to build and deploy IoT/M2M applications. Now developers can assemble the bulk of their applications from an ever-growing, global catalog of prebuilt, tested and reviewed components.

Canary: The first smart home security device for everyone Our Indiegogo campaign has ended but you can still pre-order Canary at:canary.is Canary is a single device that contains an HD video camera and multiple sensors that track everything from motion, temperature and air quality to vibration, sound, and activity to help keep you, your family and your home safe. Controlled entirely from your iPhone or Android device, Canary alerts you when it senses anything out of the ordinary — from sudden temperature changes that can indicate a fire, to the sound and movement that could mean an intrusion. Instantly receive, view and act on the alerts wherever you are. Over time, Canary learns your home’s rhythms to send you smarter alerts.

E La Carte Releases More Powerful Version Of Customized Tablet For Restaurants E la Carte, a company that develops a tableside tablet for the restaurant and related hospitality industries, is debuting a brand new version of its hardware for restaurants. As we’ve written in the past, E la Carte launched Presto earlier this year to bring user-friendly tablets to restaurants to bring efficiency to the tableside and ordering experience. The 7-inch tablet includes a digital menu that lets you sift through the restaurant’s food and drink selection via photos and detailed descriptions using a touch-screen interface.

Home Automation: Guidebook To a Growing Trend Today’s home automation solutions connect homeowners to their homes through smartphones, tablets or PCs. Like a remote control, home automation gives people the power to control their security system, door locks, lighting and temperature at any time, from anywhere just about anywhere. As more people choose to automate their home, isn’t it time you do the same? Follow this useful guide created by My Alarm Center to find out why. [Click here for full size version]

Occipital Raises $1M (And Counting) On Kickstarter To Bring 3D Scanning To The Masses Boulder & SF-based startup Occipital is probably still best known for its Red Laser and 360Panorama apps, but it confirmed today that it raised over $1 million on Kickstarter to bring its Structure 3D sensor to market. The Structure isn’t just any 3D sensor though. It’s an incredibly small one — so small, in fact, that it can onto the back of your iPad (note: it’s compatible with any iOS device with a Lightning port) and connect without completely killing your battery life. While run-of-the-mill users can use the Structure and its early batch of companion apps to scan objects for printing at Shapeways or to fling balls for virtual kittens to chase around the 3D representation of a room, Occipital was really gunning to pick up developer support this time.

Spark: Upgrade your lights with Wi-Fi and apps by Spark Devices TechCrunch: "The project aims to turn every lamp in your home into a web-based juggernaut." WIRED Gadget Lab: "It's not hard to imagine using lights to display other types of data..." Fast Co Design: "It’s all pretty neat for everyday consumers, but it could be revolutionary for the deaf or hard of hearing."

Automated Home » New London Smart App-artment Demos Home Automation Heaven One of the UK’s most well known smart home installation companies, Cornflake, has just opened a new show apartment in the west end of London. The ‘Smart App-artment’ is described as an experience centre where you’ll find ‘technology in empathy with design’. You can book a tour of the show home by contacting Cornflake, but in the meantime tease yourself with the photos and the video below… An iPad-controlled Smart APP-artment with thrilling smart technology threaded through every room opens in London today. Dressed as a high-end domestic property, the Smart App-artment showcases the most covetable home automation technology on the market while trading as an exclusive store.