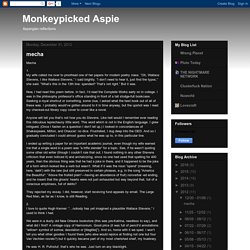 My wife called me over to proofread one of her papers for modern poetry class. “Oh, Wallace Stevens, I like Wallace Stevens,” I said brightly. “I don’t need to hear it, just find the typos,” she said. “What’s this in the 13th line: spended? Now, I had read this poem before. Anyone will tell you that’s not how you do Stevens. I ended up writing a paper for an important academic journal, even though my wife warned me that a single word in a poem was “a trifle slender” for a topic.

They rejected my essay. 2. We were in a dusty old New Orleans bookstore (this was pre-Katrina, needless to say), and what did I find? He was H. The way my mind works, I line up: H. What boggles people’s minds is they think a poet has to live hand to mouth like a Murger hero and spit blood from his eyes like a horntoad. “Forms, flames, and the flakes of flames.” Anyone can write about snow in Connecticut. 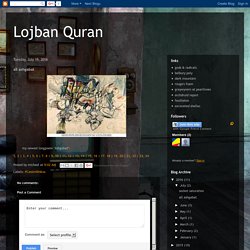 Sonnets to Chango. Sonnets to Chango This is a set of blank "sonnets" utilizing for endwords a word-row called the Arbatel, which is an ordered set of the "unrhymable words" (necessarily somewhat arbitrary) of English, rearranged via a magic square. 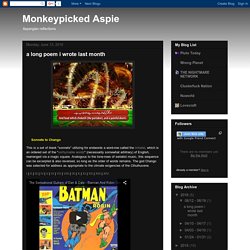 Analogous to the tone-rows of serialist music, this sequence can be excerpted & also reversed, so long as the order of words remains. The god Chango was selected for address as appropriate to the climate exigencies of the Cthulhucene. Igitur.

The entire cover design can be found here: – graywyvern

This is an emblem book in which the sonnet on the right (odd numbered pages) is related to the image on the left (even numbered pages). the original chapbook was designed to be viewed in the manner of a calendar, with the spine horizontal. – graywyvern

Lie and lay. On zombiehood. 'From the power to transform him into a thing by killing him there proceeds another power, and much more prodigious, that which makes a thing of him while he still lives. 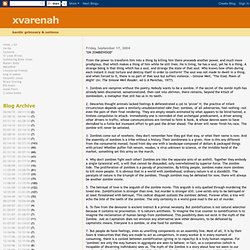 He is living, he has a soul, yet he is a thing. A strange being is that thing which has a soul, and strange the state of that soul. Who knows how often during each instant it must torture and destroy itself in order to conform? VampireMirror.

In poem #9 the line shd read: "is a mask FOR the dance of death" – graywyvern

Guelphs. Three Encounters (1) By Michael Helsem 'Pleasant.' -- The New Yorker" (blurb on Wicked Uncle) "One wishes very much to believe in what Carlyle termed 'the hero as poet', for since in our time the battle to make sense is normally lost, there is greater need to believe that someone did win it than that particular poems succeed. 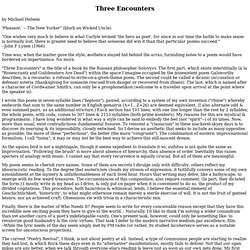 " ORG/N/ISM. The Theory and Practice of Oligarchic Collectivism :Graywyvern G Graywyvern. The king in yellow. The King in Yellow: a Jacobean Noh Play by Graywyvern Scene 1. 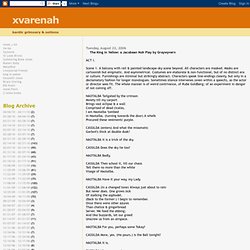 A balcony with rail & painted landscape-sky scene beyond. All characters are masked. Masks are cartoonish but enigmatic. And asymmetrical. NAOTALBA Tailgated by the crimson Moiety till my carport Brings vast eclipse & a wall Comprised of dead cicalas, I am Naotalba 'tombed In Naotalba. CASSILDA (enters) And what the miasmatic Garboil's thick at double dusk? NAOTALBA It is a trick of the sky. CASSILDA Does the sky lie too? NAOTALBA Badly. CASSILDA Then school it, till our chaos Tell there no more than the white Visage of Naotalba. NAOTALBA Have it your way, my Lady. CASSILDA (in a changed tone) Always just about to rain But never does. NAOTALBA For you, perhaps some Tokay? CASSILDA More, yes. NAOTALBA It is. CASSILDA I have a yearning Sudden-like, to attend as Some contraption of Babbage, An automaton, a pun In gray alloy. NAOTALBA (aside) No demon Better simulates a jest.

Got my CD back from Ache Records. They said it was the "most interesting demo we've ever received", "but"... At least they did send it back. The last label i tried, didn't even do that. (Xvarenah blog, 6/16/03) – graywyvern