Learn to read Korean in 15 minutes 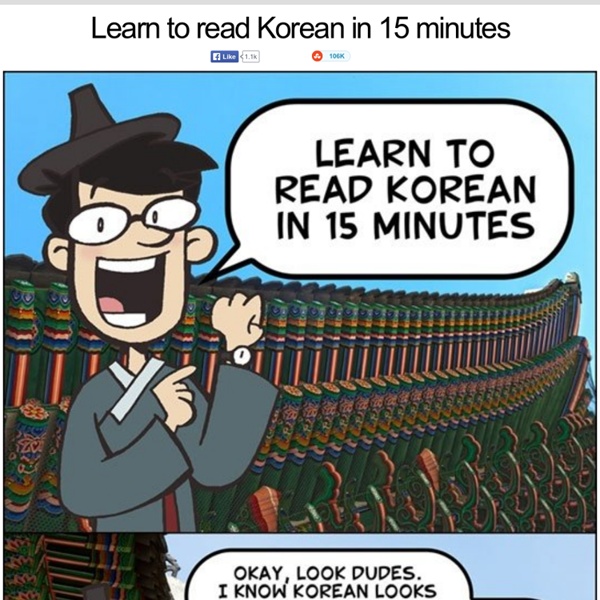 Wheel Alignment Guide - How To Align Your Car At Home - Hot Rod Magazine All Pages Photography by Matt King, Randy Lorentzen/Planet R Hot Rod Magazine, August 03, 2009 Most gearheads understand the basic definitions of caster, camber, and toe, but when it comes to actually measuring or setting these wheel-alignment specs, the easy solution is to bring the car to a professional shop. For cruisers where an alignment is a set-it-and-forget-it proposition, that's probably OK. But if you enjoy the satisfaction of knowing how to do it yourself, or if you expect to be making enough alignment changes that taking your car to a shop every time would be expensive and impractical, you'll benefit from adding alignment skills to your mental toolbox. Aligning a car may seem like one of those voodoo sciences that makes no sense if you've never actually seen it done, but as we learned by doing in preparing this article, the process is really quite straightforward if approached logically.

Homemade Electric Kiln I was frustrated with the price of electric burnout kilns for ceramics, metal annealing, glass enameling, and melting precious metals etc,. so I decided to build my own. Most kilns that run at these temperatures cost between $600 and $1200. With a little help from a guy at a ceramics store, I built one for about $120 (not including the power controller and pyrometer). This little electric kiln can get up to 2000 degrees F and is easy to make without any special tools besides a handheld router. I also wanted one that I could take apart and replace the element, since these are inexpensive. Materials: 1. 8 x 10" bolts with nuts- 1/4" diameter 2. 7 x soft fire bricks (4 1/2" x 9"- make sure they are soft) 3. Tools: 1.

5 surefire ways to kill a houseplant You bought that houseplant because it would add a lush, tropical feel to your home. Now look at it! The poor, scraggly thing looks half dead. Soon, no doubt, it will be completely gone. You're doing it again — killing another houseplant. Becky Brinkman, manager of the Fuqua Orchid Center at the Atlanta Botanical Garden, may have the answer. 1. A good grower learns to recognize the change in the color of the potting as it dries out. 2. Don’t underestimate how much light intensity plants need to grow well. 3. Not all mixes are created equally. 4. Peat moss breaks down after about two to three years. 5. An actively growing healthy plant needs food. Are you guilty of one or more of these houseplant offenses? If it’s too late for some of the plants you already have, use the guide above to care for future purchases. Once you have the right plant in the right spot, your home will no longer be a dreaded plant graveyard. Related on MNN:

Learn to read Russian in 15 minutes (Yes, for real. I thought it was a joke at first, too.) Here’s a really interesting and surprisingly simple breakdown of the Russian alphabet from writer Peter Starr Northrop and cartoonist Ryan Estrada. Give it a few minutes of your time and you’ll be confidently sounding out Russian words by the end. Next up: Learning what those words mean. See more from Northrop and Estrada.

DIY Decor Tutorial: Rorschach (Inkblot) Wall Art | The DIY Homegirl Recently, I was reminded of a past art/decor project. Many years ago— before Pinterest, before entering the blogging world, before knowing I wanted to be an interior designer— I created a few Rorschach “tests.” Rorschach tests were used back in the day by psychologists to help determine an underlying disorder with patients. They’ve always fascinated me, because like other forms of art, there’s no wrong perception from the viewer. When I first made these, it was just for fun, to see what would appear in the blots. Creating inkblots is very easy, but one thing I don’t like is that the fold in the paper is visible. Supplies: *Wax paper *Acrylic craft paint in 2 oz. tubes *Strathmore 300 watercolor paper (90 lbs.)— this can be bought by the sheet or as a pad at most craft/art stores. TIP: Watch out for the watermark so it doesn’t become part of your art. 1. TIP: when using this style watercolor paper, there’s a rough side and a smooth side. 2. 3. 4. 5. 6. 7. 8. *Layer several inkblots.

How to Do Tai Chi Edit Article345,638 views 46 Editors Edited yesterday Four Parts:Breathing, Form, and StyleMastering the MovesFinding the Right ClassBecoming a Pro Tai Chi Chuan (Taijiquan) is an ancient Chinese "internal" or "soft" martial art often practiced for its health-giving and spiritual benefits; it is non-competitive, gentle, and generally slow-paced.[1] Contrary to the Western concept of "no pain, no gain" one hour of tai chi actually burns more calories than surfing and nearly as many as downhill skiing, so it's definitely a veritable workout.[2] But that's just one of the many benefits! Ad Steps Part 1 of 4: Breathing, Form, and Style 1Warm up with proper breathing and centering. 5Experiment with different styles. Part 2 of 4: Mastering the Moves 1Master the moves by understanding the philosophy and its makers. 8Go from short form to long form. Part 3 of 4: Finding the Right Class 1Choose a style of tai chi that fits with your needs and interests. 4Pick a style of instruction.

About SMC repair - Corvette Forum For glue/filler, I used some Evercoat SMC resin (Not the vette panel adhesive, but the SMC resin) to fabricate a door handle slot that got smashed in and destroyed by vandals. I ordered it online through goferauto for 28 bucks; all the materials you use for any small or medium sized SMC repair shouldn't cost over 40 bucks. To prepare, I grinded out the loose/damaged crap, hand-sanded the hard stuff down with 60 grit to a taper for maximum surface area and bonding, and cleaned the repair surface well with soap and water. I then cut out dozens and dozens of 1-inch chunks of woven fiberglass mat (Autozone has it). I mixed a bit of resin and hardener in a tin-foil bowl with a plastic knife. I didn't use gloves or anything because this method isn't very messy, but be warned that if this resin gets on your hands it will not come off for days. If there are damage holes all the way through a panel, an additional backer panel must be made before you can proceed to the steps above.

How To Make A Lava Lamp, Retro's Basic Formula The Retro-Basic Formularetro272's Lava Lamp Method This great lava lamp formula was submitted to Oozing Goo by the concoction master retro272. Thanks to his experimentation, many many many (maybe 12, maybe 1200) lava lamp scientists have successfully circumvented the annoying gag gift store at the local mall. WARNING! MATERIALS NEEDEDHere is a list of materials you may need, and some common sources for them: WAX: Canning and candle wax is the best source. PERCHLOROETHYLENE: Also known as: tetrachloroethylene, ethylene tetrachloride, or ‘Perc’. WATER: Distilled water is the best choice. CANNING/PICKLING SALT: You must use canning and pickling salt, as ordinary table salt will cloud the water. AUTOMOTIVE ANTIFREEZE: Buy the regular ethylene glycol antifreeze. DISHWASHING LIQUID: We will only need a drop or two. MAKING THE OOZE Several old canning jars with lids are perfect for melting, mixing, and storing your ooze.

Chapter 2. Human anatomy and figure drawing Chapter 2. Human anatomy and figure drawing Before we start, I'd like to point out that knowledge of human anatomy is not a replacement for studying the body from real life or photos. So keep cranking out those sketches! (And hoarding those Victoria's Secret catalogs and similar magazines. Strictly for reference, of course.) We'll start with the largest bones and muscle masses. I would also like to apologize in advance for using the Latin names of the bones and muscles. (All illustrations in this chapter are referenced from photos that were taken from large distances, x-ray images, and [Gold], [Gray], and [Barc]) Figure 2.1. The human body is usually measured in units of heads. Unless you are drawing an adult that is standing up straight, you can't use this diagram directly. There are also several proportion guidelines that are not obvious from this diagram:

How Things Work | Bozgo Posted by admin on Dec 28, 2012 in Entertainment | 27 comments For many thing that we all day see in our lives, we don’t know how some of that things work. Here you can see how things really work. How a Zipper Works Illustrating Pi: Unrolling a Circle’s Circumference How a Pill Press Works How Walschaerts Valve Gear in Steam Locomotives Works How a Caliper Works How a Radial Engine Works How the Geneva Drive Works How a Hypotrochoid is Made How an Alpha Stirling Engine Works How a Sewing Machine Works How to Draw a Yin Yang Symbol Using Circles