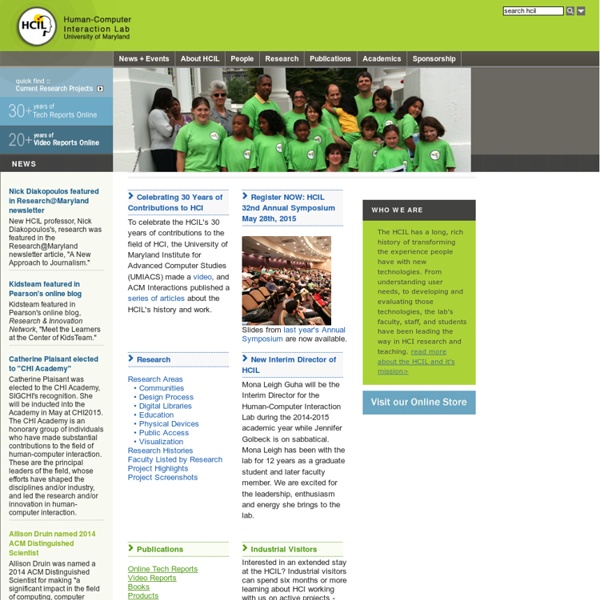 InfoVis Group @ UBC Computer Science 06/2016 [talks]: Information+ Keynote, Lightning Talk Tamara Munzner will be giving a keynote talk entitled Visualization Analysis and Design at Information+, June 16 - 18, 2016 in Vancouver BC, Canada. Also at Information+, recent group alumnus Johanna Fulda will be giving a lightning talk entitled What’s up with Data Journalism in Canada?. Engineering Anomalies Research The Princeton Engineering Anomalies Research (PEAR) program, which flourished for nearly three decades under the aegis of Princeton University’s School of Engineering and Applied Science, has completed its experimental agenda of studying the interaction of human consciousness with sensitive physical devices, systems, and processes, and developing complementary theoretical models to enable better understanding of the role of consciousness in the establishment of physical reality. PEAR has now incorporated its present and future operations into the broader venue of the ICRL, a 501(c)(3) not-for-profit research organization, in addition to Psyleron—a company that provides Random Event Generator devices to enable the continued exploration of PEAR’s findings by the general public and research communities. On the accompanying menu of pages we have attempted to sketch the substance, spirit, and findings of this scholarly endeavor.

40 Ways of Visualizing Brazil’s Historical Election This is a special guest post by Tiago Veloso from Visual Loop – a non-stop stream of Infographics, Maps, Charts and many other Visualization Goodies, with lots of new posts everyday. User submissions are always welcome, opened to artists and designers from all over the world. Be sure to check out Tiago’s first massive hit on Inspired Mag – Info-Visualization Through the Eyes and Talent of 10 Brazilian Designers There was a lot of buzz surrounding the Midterm elections in the U.S., but, for the last couple of months, another big election happened: the Brazil’s Presidential Election. As some of you may know, I currently live in Brazil – that’s why my first post was about the amazing information designers we have here – , so, I’m really happy to make this post, for a couple of reasons.

The Connectome — Harvard School of Engineering and Applied Sciences Lead investigators Hanspeter Pfister (SEAS ), Jeff Lichtman (FAS/Molecular & Cellular Biology, Center for Brain Science) and Clay Reid (HMS/Neurobiology, Center for Brain Science) Description The overall goal of the Connectome project is to map, store, analyze and visualize the actual neural circuitry of the peripheral and central nervous systems in experimental organisms, based on a very large number of images from high-resolution microscopy. The proposing team from the Center for Brain Sciences has already demonstrated its capacity for, and expertise in, high-throughput imaging.

Center for African American Studies We thank the supportive and generous Princeton University alumni who recognize the important work of the Center for African American Studies. On March 11, we dedicated the Hobson-Rogers Seminar Room and the Barfield-Johnson Seminar Room of Stanhope Hall, our historic home. Professor Naomi Murakawa joins the faculty at the Center for African American Studies as an associate professor of African American Studies. The Use of Data Visualization in Government Monday, June 10th, 2013 - 10:26 The concept of visualization recalls a pivotal scene in the movie A Beautiful Mind which showed the protagonist, mathematician John Nash, looking at an expansive table of numbers. Slowly, certain numbers seemed to glow, suggesting that Nash was perceiving a pattern among them, though no other researcher had been able to draw any meaning from the table. For most people, however, a table of numbers is not intrinsically meaningful. Think of the most prosaic example: a spreadsheet. Since their early days, spreadsheet applications have offered tools that allow users to create graphics of all sorts from their tables, the better for people to understand exactly what the data are showing.

CTC Virtual Workshop Important to note is the ability of a package to transform data from your program. For instance, many plotters also include a spreadsheet with macros. When a program makes a figure, can you interact with it by rotating it or change colors in an interactive way? Brief Answers to Cosmic Questions Structure of the Universe Does the Universe have an edge, beyond which there is nothing? Are the galaxies arranged on the surface of a sphere? Why can't we see the whole universe?

Institute: Visualisierungsinstitut der Universität Stuttgart The Visualization Research Center (VISUS) is a central institution of the University of Stuttgart. About 30 scientists research in different areas of Scientific Visualization, Visual Analytics, Visual Computing and Computer Graphics, as well as interdisciplinary, applied research. The latter results in a very close co-operation with non-visualization disciplines of the University of Stuttgart. As part of the Institute for Visualization and Interactive Systems (VIS), the insitute is embedded into the Faculty of Computer Science, Electrical Engineering and Information Technology. There is a close cooperation to the other departments of VIS.

rgraphics R Graphicsby Paul Murrell The SECOND EDITION of this book is now available, with its own web page. A book on the core graphics facilities of the R language and environment for statistical computing and graphics (Chapman & Hall/CRC, August 2005). A link to the publisher's web page for the book. Top 10 Universities With Free Courses Online #1 UC Berkeley Ranked as the #1 public school in the United States, Berkeley offers podcasts and webcasts of amazing professors lecturing. Each course has an RSS feed so you can track each new lecture. For printable assignments and notes you can check the professors homepage, which is usually given in the first lecture or google his name. Even though the notes, homework and tests are not directly printed in the berkeley website, as they are in MIT and other courseware sites, it's not a problem to find them.