The Great Gatsby - For Nes 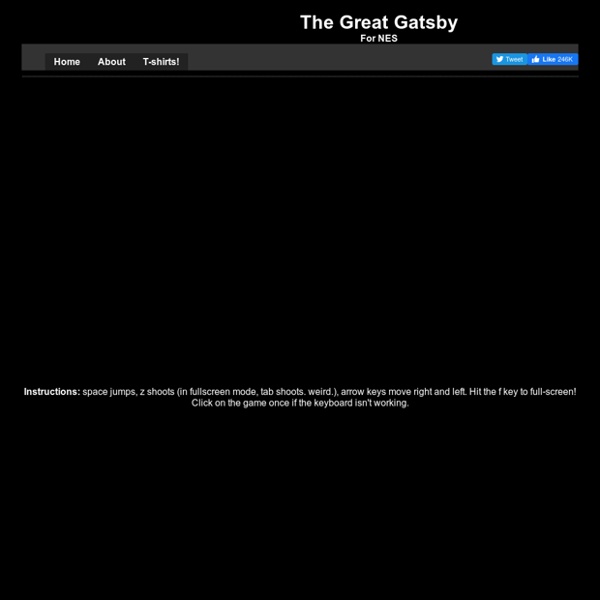 The 15 Best Miramax Films Today, the indie world and the film world at large lost a giant in the field, watching Disney close the doors and turn the lights off on Miramax. As sad a day like today is, and as uncertain as the future is, we can still hold on to the memories. Most of them are now on Blu-ray. Or at least Laser Disc (because we all own one). Without further tears in our eyes, we’d like to remember Miramax for their 15 Best Films. If you’re like me and Rob Hunter, your rental queue is already full. Ultimate Tic-Tac-Toe Updated 7/16/2013 – See Original Here Once at a picnic, I saw mathematicians crowding around the last game I would have expected: Tic-tac-toe. As you may have discovered yourself, tic-tac-toe is terminally dull. Free Racing, Simulation Games (Page 2) Dirchie Kart Dirchie Kart is one for fans of Mario Kart and other fun racing games. Clearly inspired by the Nintendo classic and other games of the 16-bit period, the player races against... Driving Speed 2 Driving Speed 2 is a racing simulation in which you can choose from four high powered V8 muscle cars and race against up to 11 computer controlled opponents on two circuits. Dude the Snowman

Crush the Castle 2 Description Even after crushing and capturing Arcturia, the Redvonian King was still longing for more castles to crush. Rumor has it that King Blutias has built sturdier castles in his cluster of islands known as Crushtania the Redvonian King wants them crushed. The King has sent you, his Seige Master, and Halgrim his finest mason, to assemble the greatest minds in the land to destroy Blutias's empire. Produced In-House by Armor Games Inc. Doctor Who's 50th Anniversary The Doctor Who doodle started life as a request from a huge fan at Google. It seemed daunting- 11 Doctor's, 50 years of adventures, countless enemies and time travel! But we loved the idea of science fiction, technology and fun coming together, so we set about creating a multiple level game.

The 15 Craziest Things In Nature You Won't Believe Actually Exist Mother Nature is beautiful and amazing because we can see many amazing stuff like these 15 things that you won’t believe they actually exist. All these places are real. It is hard to believe in that, but that is true. 1. Volcanic lightning aka “dirty thunderstorms.” 2. 2048 Join the numbers and get to the 2048 tile! New Game How to play: Use your arrow keys to move the tiles. 100 Of The Best Free Online Flash Games Topics: 100 of The Most Popular Flash Games , Best Casual Games , Best Games of 2011 , Browser Games , Top Online Games Hey guys, I must have spent countless hours playing games this summer.. Through all the games I played and were recommended to me, I thought I would like to share a list with all of you.