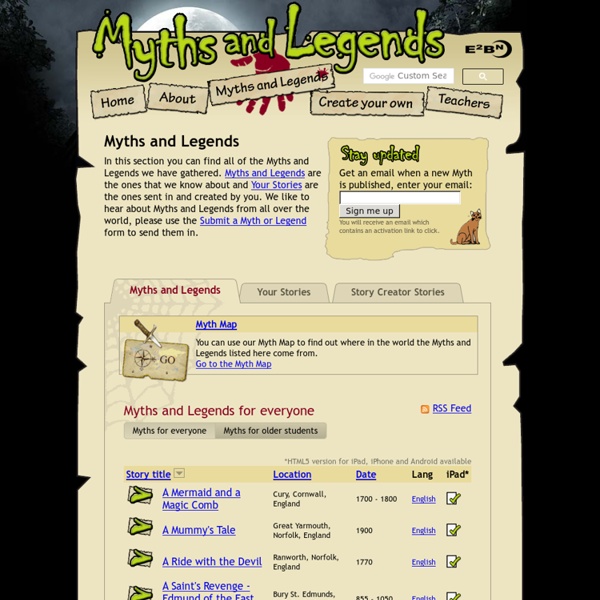 Native American Folklore of Mount Shasta There is no doubt that Mount Shasta has long been viewed as a sacred place by a number of Native American groups, and the special relationship has caused the mountain to play a significant role in their customs, myths, legends, and folktales. In an unpublished U.S.F.S. report titled "Native American Historic Context: Mount Shasta California," Winfield Henn provides an excellent review of the literature relating to the historical importance of Mt. Shasta to local Native Americans (1991).

Namagiri Thayar Namagiri Thayar (Tamil: நாமகிரித்தாயார்) or Namagiri Amman (Tamil: நாமகிரியம்மன்) is a form of Hindu goddess Lakshmi worshipped in Namagiri (Namakkal) in modern Tamil Nadu, India.[1] In Hindu mythology she is the consort of Narasimha, the lionman incarnation of Vishnu. Namagiri Thayar was the favourite deity of Indian mathematician Srinivasa Ramanujan's family. Namagiri and Srinivasa Ramanujan[edit] Srinivasa Ramanujan credits his mathematical findings to the Goddess of Namagiri. According to Ramanujan, she appeared in his visions, proposing him mathematical formulae, which Ramanujan would then have to verify. Myths & Legends Ancient Origins seeks to uncover, what we believe, is one of the most important pieces of knowledge we can acquire as human beings – our beginnings. While many believe that we already hold such knowledge, our view is that there still exists a multitude of anomalies and mysteries in humanity's past that deserve further examination. We therefore wish to foster an open community that is dedicated to investigating, understanding and explaining the origins of our species on planet earth. To this end, we aim to organize, support and even finance efforts in this direction. Our aim is to move beyond theories and to present a thorough examination of current research and evidence and to offer alternative viewpoints and explanations to those currently held by mainstream science and archaeology. Come with us on a journey to explore lost civilisations, sacred writings, ancient places, unexplained artefacts and scientific mysteries while we seek to reconstruct and retell the story of our beginnings.

List of legendary creatures (B) - Wikipedia, the free encyclopedia - StumbleUpon From Wikipedia, the free encyclopedia Buraq from a 17th-century Mughal miniature What are the Elements of a story? Home | Catalog | About Us | Search | Contact Us | Site Map | © Annenberg Foundation 2016. All rights reserved. Legal Policy The Story of David Lang - Historic Mysteries Did David Lang mysteriously vanish in 1880? It started out as an ordinary day. On September 23, 1880, on a farm near Gallatin, Tennessee, David Lang was walking across the fields of his farm. The area where he was walking was large and flat.

Create an animation online with ABCya! Animate ABCya is the leader in free educational computer games and mobile apps for kids. The innovation of a grade school teacher, ABCya is an award-winning destination for elementary students that offers hundreds of fun, engaging learning activities. Millions of kids, parents, and teachers visit ABCya.com each month, playing over 1 billion games last year. Apple, The New York Times, USA Today, Parents Magazine and Scholastic, to name just a few, have featured ABCya’s popular educational games. ABCya’s award-winning Preschool computer games and apps are conceived and realized under the direction of a certified technology education teacher, and have been trusted by parents and teachers for ten years. 10 Universal Myths Of The Ancient World Religion No matter where you’re from, you probably have your fair share of wild myths. From stuff like the legend of King Arthur and his magic BFF to the mischievous gods of Ancient Greece to the insane epics of Hindu mythology, just about every culture comes with a set of stories that most other cultures call foreign or strange.

English folklore English folklore is the folk tradition which has developed in England over a number of centuries. Some stories can be traced back to their roots, while the origin of others is uncertain or disputed. England abounds with folklore, in all forms, from such obvious manifestations as the traditional Robin Hood tales, the Brythonic-inspired Arthurian legend, to contemporary urban legends and facets of cryptozoology such as the Beast of Bodmin Moor. Blendspace - Create lessons with digital content in 5 minutes Make mobile learning awesome! Student creation Share materials Free! Get our new app! Save time by using free lessons & activities created by educators worldwide! Be inspired!

10 Bone-Chilling Urban Legends Creepy Myths and legends have been around since the first humans sat around a campfire and spun tales of the things that lurk beyond the firelight. History has no shortage of malicious serial killers, demented madmen, and nightmarish creatures, and when legends and killers come together, you get some pretty creepy stories. We hear it from the day we’re born: Don’t trust strangers. Greek Gods Family Tree / Genealogy Doing homework? Your teacher has already seen this. See Theoi; it has properly-sourced information. Known errors: Generally inconsistent sourcing. This chart was made in 2004, and Wikipedia was treated as a primary source. Hyperion is also a Titan. Choosing Web 2.0 Tools for Teaching and Learning By Tom Preskett Connecting formal education to social media/web 2.0 tools is a relatively new area. Educational institutions hope that by purchasing a virtual learning environment (VLE) all of their learning technology needs will be met.