The Occult - Occultopedia: The Occult and Unexplained Encyclopedia 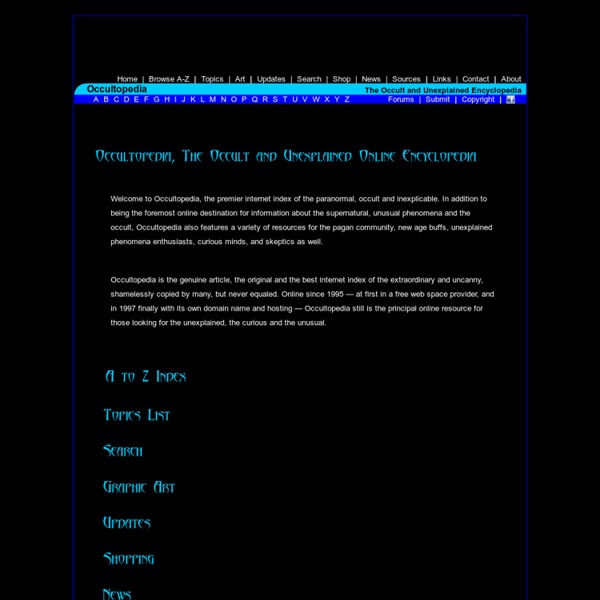 Welcome to Occultopedia, the premier internet index of the paranormal, occult and inexplicable. In addition to being the foremost online destination for information about the supernatural, unusual phenomena and the occult, Occultopedia also features a variety of resources for the pagan community, new age buffs, unexplained phenomena enthusiasts, curious minds, and skeptics as well.Occultopedia is the genuine article, the original and the best internet index of the extraordinary and uncanny, shamelessly copied by many, but never equaled. Online since 1995 — at first in a free web space provider, and in 1997 finally with its own domain name and hosting — Occultopedia still is the principal online resource for those looking for the unexplained, the curious and the unusual. Occultopedia is a work in progress, and is not completed. There are so many aspects to the occult and the extraordinary, it would be next to impossible to actually finish such a project.

The Key of Solomon (Clavicula Salomonis) edited by S. Liddell MacGregor Mathers For a reprint of Mathers' edition, see listing at Amazon.com INTRODUCTION by Joseph H. Peterson. The Key of Solomon is the most famous and important of all Grimoires, or handbooks of Magic. As A.E. Waite has stated (BCM, pg. 58) "At the head of all, and, within certain limits, the inspiration and the source of all, stands the Key of Solomon. ...

How to Read Palms: 9 Steps Edit Article Two Parts:Deciphering the LinesInterpreting the Hands, Fingers, etc.Questions and Answers Palm reading, otherwise known as palmistry or chiromancy, is practiced all over the world. It has its roots in Indian astrology and Roma fortune-telling.[1] The objective is to evaluate a person's character or future by studying the palm of their hand. Whether you're an aspiring palm reader or you're just looking for a fun way to pass the time and impress your friends, even you can learn to gain insight just by holding someone's hand. 44 Ways to Become an Authority in Your Niche Want to become an authority in your blog’s niche? Becoming an authority not only establishes your reputation and expertise, but it is a surefire way to earn a living and monetize your blog. How? The Benefits of Being an Authority There is no better way to build your reputation as an influencer than becoming an authority. Here’s why:

Golden Dawn Tradition Occult Dion Fortune - In the Golden Dawn Tradition Ritual magician and occult author Dion Fortune was born Violet Mary Firth, on 6th December 1890, in Bryn-y-Bia, Llandudno, North Wales. The family moved to Somerset when Violet was twelve and by the time she was fourteen they had converted to Christian Science. Subsequently they lived in various parts of London (where Violet's mother Sarah Jane practiced as a Christian Science healer), then moved to Letchworth, Hertfordshire.

Ouroboros - Fullmetal Alchemist Wiki - Wikia Ouroboros refers to the ancient mystical symbol representing a dragon devouring its own tail. It represents the eternal cycle of life and death. The circular affinity suggests the eternal cycle of life death or death and birth that happens to each life born. The head of the dragon represents life, while the tail as it is being bitten represents the end of life, the circular motion shows the perpetual cycle of life and death as the dragon consumes its tail. All of the seven main Homunculi in the Fullmetal Alchemist series are presumed to have the mark located somewhere upon their person as if tattooed there, save for Pride in the manga and 2009 anime. Demons A to Z - Weird Encyclopedia A list of demons, devils, and evil gods from around the world. Probably not exhaustive. If you know of any more, keep it to yourself. Abaddon - King of the Demons of Hell.

20 Most Useful Microsoft Word Shortcut Keys That You Would Actually Use “I saw a bank that said ’24 Hour Banking’, but I don’t have that much time”. – Steven Wright (comedian) Being a part-time writer and a full-time dad, I am very concerned with my productivity. I want to get my writing assignments done well and fast so I can enjoy more time with my wife and daughter. Now I’m sure that not all of you reading this have families to raise and all, but I’m guessing two things: 1. All of you want to improve your productivity and efficiency at work (otherwise you won’t be reading this blog). 2. Most of you use Microsoft Word pretty frequently in your day-to-day work.

theomagica - On Crossing the Abyss The experience of Crossing the Abyss is triggered by a liminal rite and results in a series of liminal experiences in our everyday lives. It describes nothing other than the actual process of crossing the Abyss, i.e. the passing over the visionary threshold that lies between creation and divinity - as well as hopefully a safe return of the practitioner into creation. The term is not specific to a particular rite or tradition of magic but describes an underlying pattern of human existence: When we cross from creation to divinity we are stripped bare of all created forms that we hold as part of our own being: our body, our ego, our memories, our mind, etc.