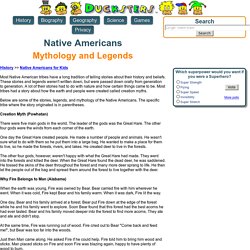 These stories and legends weren't written down, but were passed down orally from generation to generation. A lot of their stories had to do with nature and how certain things came to be. Most tribes had a story about how the earth and people were created called creation myths. Below are some of the stories, legends, and mythology of the Native Americans.

Creation Myth (Powhatan) There were five main gods in the world. One day the Great Hare created people. The other four gods, however, weren't happy with what the Great Hare had made. Why Fire Belongs to Man (Alabama) When the earth was young, Fire was owned by Bear. One day, Bear and his family arrived at a forest. At the same time, Fire was running out of wood. Just then Man came along. Man enjoyed Fire's light and warmth. The Thunder Beings (Cherokee) How People Got Different Languages (Blackfoot) National Geographic Kids. MrDonn.org - Stories, Myths (retold & written by Lin Donn) Ancient Greek Theseus and the Minotaur (word) Theseus and the Minotaur (ppt) Hermes and Apollo (ppt) Dionysus & Ariadne Little Io The Oracle at Delphi. 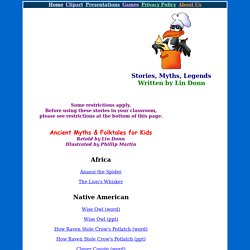 Greek Myths Archives. Myths and Legends for Kids. You will know some of these stories from myths and legends, but here, for the first time, they are told in the form of children's bedtime story poems. 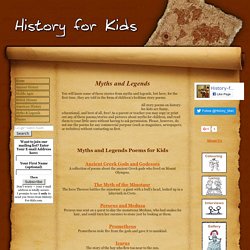 All story poems on history-for-kids are funny, educational, and best of all, free! As a parent or teacher you may copy or print out any of these poems/stories and pictures about myths for children, and read them to your little ones without having to ask permission. Please, however, do not use the poems for any commercial purpose (such as magazines, newspapers, or websites) without contacting us first. Myths and Legends Poems for Kids Ancient Greek Gods and GodessesA collection of poems about the ancient Greek gods who lived on Mount Olympus.

The Myth of the Minotaur The hero Theseus battles the minotaur - a giant with a bull's head, locked up in a labyrinth in Crete. Perseus and Medusa Perseus was sent on a quest to slay the monstrous Medusa, who had snakes for hair, and could turn her enemies to stone just by looking at them. Norse Mythology. Folklore, Myth and Legend. Canadian folklore at Americanfolklore.net. Myths, Legends, Fables & Folklore - Animals Myths & Legends - Planet Ozkids - Explore Legends, Myths and Cultures. About Myths and Legends from E2BN. Wherever you travel in the world, you will find many people willing and happy to tell you stories. 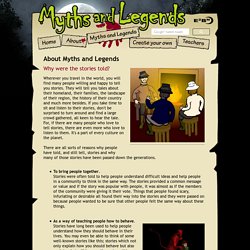 They will tell you tales about their homeland, their families, the landscape of their region, the history of their country and much more besides. If you take time to sit and listen to their stories, don't be surprised to turn around and find a large crowd gathered, all keen to hear the tale. For, if there are many people who love to tell stories, there are even more who love to listen to them. It's a part of every culture on the planet. There are all sorts of reasons why people have told, and still tell, stories and why many of those stories have been passed down the generations. To bring people together.Stories were often told to help people understand difficult ideas and help people in a community to think in the same way.

Good storytellers have long been able to make a living from their art and still do today. Scottish Folktales / Celtic Fairy Tales Legends from Scotland - Compass Rose Cultural Crossroads. By Anonymous (1889) Originally published as Folk-lore and Legends Scotland The folktales in this collection come from Folk-lore and Legends Scotland, published by W. 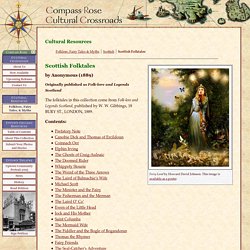 W. Gibbings, 18 BURY ST., LONDON, 1889. Contents: Many fine collections of Scottish folktales, fairy tales, and myths have been published over the years. You are free to use the folktales and legends in this online collection on your own Web site as long as you credit Compass Rose Cultural Crossroads as the source and provide a link to our Web site: