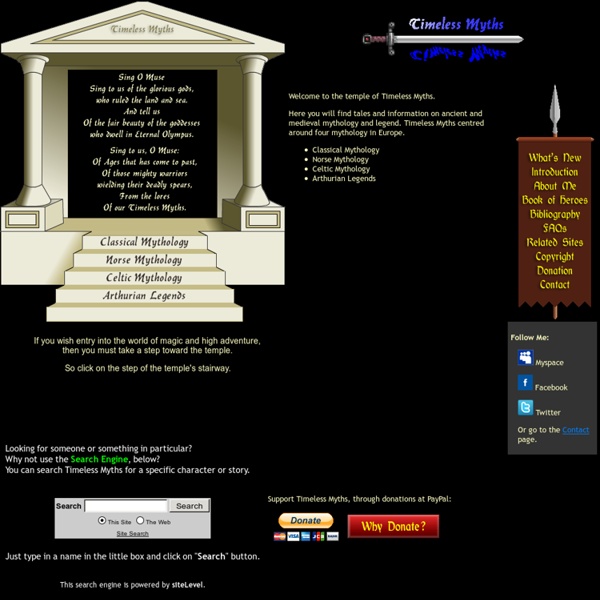 Encyclopedia of Myths Alex Fantalov: 200 mythological pictures (Greek, Scandinavian, Celtic, Russia, Finnish, Indian, Chinese, Zoroastrian mythologies) in oil and watercolor. Encyclopedia Mythica Stories for children, folktales, fairy tales and fables Myths African Fables, Safari Short Stories of Africa Africa Fables & Folk Tales Africa has as many fables and tales as it has people. Different tribes and regions has quite often a cultural variation of the same story. Folk tales and stories of Anansi has become well-known all-over the world, and often used by schools and educators to teach moral concepts. Short Tales from the San / Bushmen & Chrigi-in-Africa,Ranger of the San Clan. The folk tales and stories of the San are unique in many ways, as it bring to life the magic of the African wildlife and educate at the same time. Rangers and Safari guides, working and living in the wilderness areas of Namibia, often has contact with the San people. Just as the Bushmen, we see, experience and encounter some strange and wonderful occurrences in nature. Come and experience Africa, through the eyes of Chrigi, Ranger of the San Clan. Myths and Superstitions. Each tribe in Africa has various myths, superstitions relating their origins, culture and beliefs.

mythology/history blog (above photo by: shoomiah on Deviantart)SekhmetMythology: EgyptianGoddess of: War and destruction, strong feminine sexualityName means: “to be strong and violent”Also Known as: Nesert (Flame), Great One of HealingSymbolism: Lioness, Cobra, Eye of HorusSekmet was presumably created by Ra as a weapon of destruction because his people were disobedient to him. After she unleashed her destruction, the people of Egypt feared another attack, and decided to create a ritual in order to keep her happy. There were 700 statues involved, and the Egyptian priests were meant to perform this ritual in front of a different statue every morning and every afternoon, year round. (Above image by: sekhmet-the-flame on DeviantArt)

Godchecker mythology encyclopedia - Your Guide To The Gods