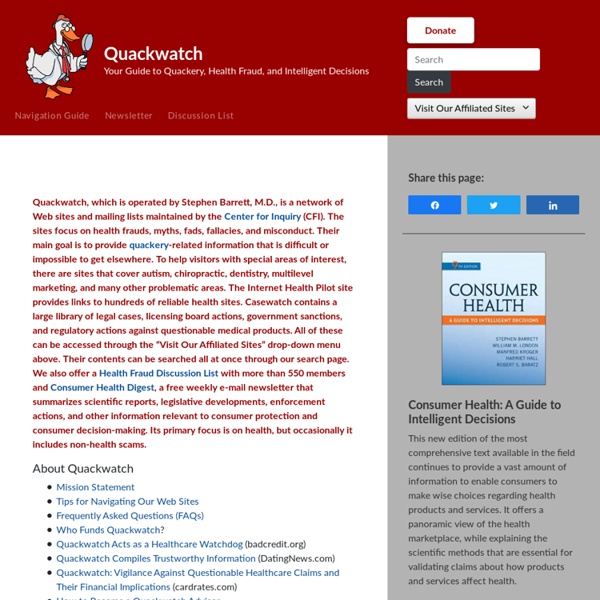 Quackwatch has grown considerably. To help visitors with special areas of interest, we maintain 24 additional sites for autism, chiropractic, dentistry, multilevel marketing, and many other hot topics. We are also closely affiliated with the National Council Against Health Fraud, which cosponsors our free weekly newsletter, and with Bioethics Watch, which highlights issues of questionable research on humans. Our Internet Health Pilot site provides links to hundreds of reliable health sites. Our Casewatch site contains a large library of legal cases, licensing board actions, government sanctions, and regulatory actions against questionable medical products. These sites can be accessed through the "Visit Our Affiliated Sites" drop-down menu above.

Dalai Lama Instructions for Life Claim: An "Instructions for Life" chain mail mantra was written by the Dalai Lama. Example: [Collected via e-mail, 2000] Origins: Much as we can't help but grin at the thought of His Holiness the 14th Dalai Lama Tenzin Gyatso, head of state and spiritual leader of the Tibetan people, pecking away at a computer keyboard as he sends a chain glurge advising people to "approach love and cooking with reckless abandon" winging its way around the Internet, we have to admit that this list has nothing to do with the Dalai Lama. (Some of the things His Holiness has actually said and written can be found here.) Neither this chain message nor its "Instructions for Life" originated with His Holiness.

Water back to top Balch Introduction An Insider’s View of a Fringe Archeology I presented this paper at the annual meeting of the European Association of Archaeologists, held in Zadar, Croatia, September 18–23, 2007, in a session called “‘Fringe’ Archaeologies: ‘The Other’ Past,” organized by archeologists Eleni Stefanou and Anna Simandiraki. This paper is in the form of a discursive essay, so if you were expecting a neatly developed argument, intricate footnotes, and a formal bibliography, you are going to be disappointed. I will, however, touch on a number of topics related to the title of this paper. And I will give enough hints for you to track down articles and books mentioned in the essay. First, let me establish my credentials as a “fringe” archeologist, one whose work is concerned with the development of an “other” past.

Category:Hoaxes To forestall disputes among editors, religions and religious figures are excluded from inclusion in this category, although this may be disputed by some editors. Hoaxes are attempts to make people believe unlikely things. Unlike confidence tricks, money is not usually involved, but the trickster may try to play practical jokes, expose gullible people or annoy political or artistic rivals. "Ionized" and alkaline water: snake oil on tap "Ionized water" is one of many products and panaceas that the wonky-water wellness industry flogs onto the large segment of the general public that lacks the scientific background to distinguish scientific fact from pseudoscientific hype when the two are closely intertwined. The purpose of this page is to critically examine some of the claims about "ionized" and alkaline waters from the standpoint of modern chemistry and physiology in order to provide you with the information you need to make your own informed decision before opening your wallets to the hucksters of these products and whose claims are totally lacking in scientific support. What most of these outfits actually sell are grossly overpriced electrical devices that purport to produce "ionized" and alkaline water by the process of electrolysis. In multi-level marketing scams, the parent company keeps a low profile and makes few claims that would attract the scrutiny of regulators such as the U.S. FTC. U.S.

Exponential Economist Meets Finite Physicist [slimstat f='count' w='ip' lf='resource contains economist'] views this month; [slimstat f='count' w='ip' lf='strtotime equals 2011-07-01|interval equals -1'] overall Some while back, I found myself sitting next to an accomplished economics professor at a dinner event. Shortly after pleasantries, I said to him, “economic growth cannot continue indefinitely,” just to see where things would go. It was a lively and informative conversation. I was somewhat alarmed by the disconnect between economic theory and physical constraints—not for the first time, but here it was up-close and personal. Hoax Brass Plaque on door at Tremedda farm, Zennor, Cornwall, England. It reads: TAKE NOTICE THAT AS FROM TODAYS DATE POACHERS SHALL BE SHOT ON FIRST SIGHT AND IF PRACTICABLE QUESTIONED AFTERWARDS. BY ORDER J.R. BRAMBLE HEAD GAMEKEEPER TO HIS GRACE THE DUKE OF GUMBY 1ST NOVEMBER 1868. Although the Duke of Gumby is probably a fictitious entity since there is no accessible record of him, the plaque may have had some deterrent effect A hoax is a deliberately fabricated falsehood made to masquerade as truth.[1] It is distinguishable from errors in observation or judgment,[1] or rumors, urban legends, pseudosciences or April Fools' Day events that are passed along in good faith by believers or as jokes.[2]

Water back to top Balch Introduction Human beings can survive without food for thirty to forty days-about five weeks-but without water, life would end in three to five days. web.stanford.edu/~pnoyes/ascii.htm About the ANPA WEST Journal When a photograph develops in the darkroom, it doesn't just emerge as a face or a landscape or whatnot. Isolated details show up first, gradually finding their places in an expanding and changing gestalt. Sometimes you see them wrong, and such mistakes are hard to let go of. An emerging spot first appears as a frog on a lily pad, and that frog is still there even after a nose and mouth appear below it.