We know more than we are, at first, prepared to acknowledge: Journeying to develop critical thinking. Peter Taylor Program in Critical and Creative Thinking Graduate College of Education, University of Massachusetts, Boston, MA 02125, USA peter.taylor@umb.edu Abstract: In this essay I present five passages in a pedagogical journey that has led from teaching undergraduate science-in-society courses to running a graduate program in critical thinking and reflective practice for teachers and other mid-career professionals. 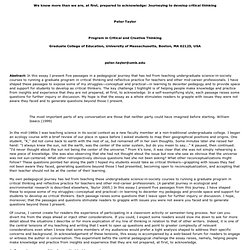 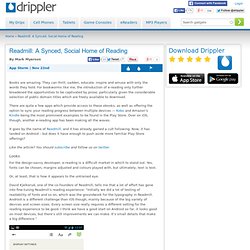 They can thrill, sadden, educate, inspire and amuse with only the words they hold. For bookworms like me, the introduction of e-reading only further broadened the opportunities to be captivated by prose, particularly given the considerable selection of public domain titles which are freely available to download. There are quite a few apps which provide access to these ebooks, as well as offering the option to sync your reading progress between multiple devices — Kobo and Amazon’s Kindle being the most prominent examples to be found in the Play Store. Over on iOS, though, another e-reading app has been making all the waves. Marquee: A publishing tool for a more dynamic Web. Marquee Makes Any Publisher Look Like A Page Layout Expert.

These days, everyone can be a publisher. 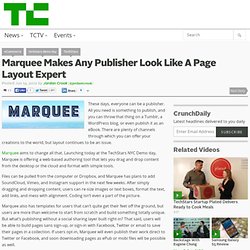 All you need is something to publish, and you can throw that thing on a Tumblr, a WordPress blog, or even publish it as an eBook. There are plenty of channels through which you can offer your creations to the world, but layout continues to be an issue. Marquee aims to change all that. Launching today at the TechStars NYC Demo day, Marquee is offering a web-based authoring tool that lets you drag and drop content from the desktop or the cloud and format with simple tools.

Marquee: Easier, Faster, more Beautiful Publishing. Editorially is the collaborative writing tool we’ve been waiting for. Tools for Writers: Wikis. By Cat Rambo If your writing features a richly detailed universe, full of names, places, and historical events, you may want to explore using a wiki to chronicle it. 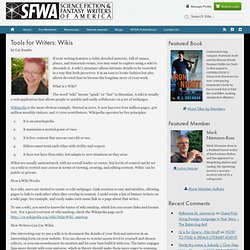 A wiki’s structure allows intricate details to be recorded in a way that both preserves it in an easy to locate fashion but also allows devoted fans to browse the longtime story of your work. Making the most of Africa’s culture and creativity: economic development, democracy and peacebuilding – By Ned DalbyAfrican Arguments. Africa’s wealth of cultural capital reflects a broader understanding that the creative industries can be a force for global economic growth. 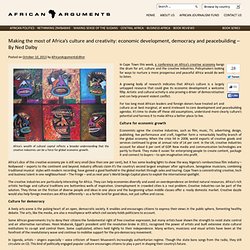 In Cape Town this week, a conference on Africa’s creative economy bangs the drum for art, culture and the creative industries. Policymakers looking for ways to nurture a more prosperous and peaceful Africa would do well to listen. A growing body of research indicates that Africa’s culture is a largely untapped resource that could give its economic development a welcome fillip. GitHub For Beginners: Don't Get Scared, Get Started. Dear Facebook: Without the Commons, We Lose the Sharing Web. For almost a decade, there have been alternate ways for creators on the web – both pros and amateurs – to license their photos, writing, movies, and music. 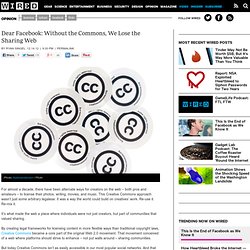 This Creative Commons approach wasn’t just some arbitrary legalese: It was a way the world could build on creatives’ work. Re-use it. Re-mix it. It’s what made the web a place where individuals were not just creators, but part of communities that valued sharing. By creating legal frameworks for licensing content in more flexible ways than traditional copyright laws, Creative Commons became a core part of the original Web 2.0 movement. But today Creative Commons isn’t as easily accessible in our most popular social networks. Because Creative Commons embodied an ethos of sharing that went beyond just show-and-tell.

Ryan Singel is the former editor and co-founder of Wired’s award-winning Threat Level section, which covers privacy, crime, and security. Yet you might think those services do believe in the idea of a commons. Kevin Slavin and Kenyatta Cheese on what happens. Coursekit is now Lore. 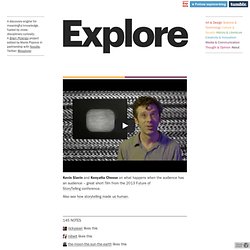 What’s the Story? Culture & SocietyMedia & Communication Kevin Slavin and Kenyatta Cheese on what happens when the audience has an audience – great short film from the 2013 Future of StoryTelling conference. Also see how storytelling made us human. #Kenyata Cheese#Kevin Slavin#storytelling#social media#internet 145 notes. Story capture. Places Are Made Of A Thousand Stories — Maptia: See the World. Why is Maptia different? 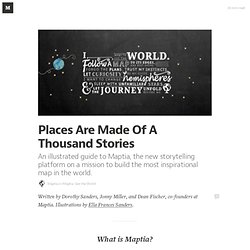 1) Every story deserves a somewhere. Most stories have a ‘somewhere’, and that somewhere in each of our stories is important. Places are like people and we have wonderfully complex relationships with them. Who do you write like - digital storytelling tools. Euromight: A Quest to Capture the Afro-European Narrative. New America Media, Question & Answer, Khalil Abdullah, Posted: Jul 21, 2013 Editor's Note: In March 2012, the British Library -- the equivalent of America’s Library of Congress -- announced its decision to include Euromight.com in its archive of websites that contribute to the understanding of British society. 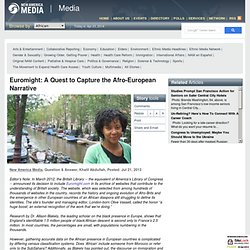 The website, which was selected from among hundreds of thousands of websites in the country, records the history and ongoing evolution of Afro-Brits and the emergence in other European countries of an African diaspora still struggling to define its identities. Tools for Collective Sensemaking and Civic Engagement. No video available :_( This workshop was led by Paul Fernhout on the theme of tools for collective sensemaking and civic engagement. 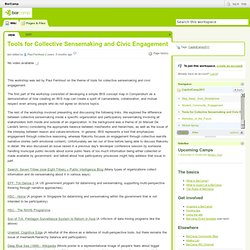 The first part of the workshop consisted of developing a simple IBIS concept map in Compendium as a demonstration of how creating an IBIS map can create a spirit of camaraderie, collaboration, and mutual respect even among people who do not agree on divisive topics. The rest of the workshop involved presenting and discussing the following links. We explored the difference between collective sensemaking inside a specific organization and participatory sensemaking involving all stakeholders both inside and outside of an organization. SenseMaker®