Life After Death - Paranormal. General We all should be reasonably open-minded skeptics and for psychic phenomena indicative of life after death, only accept the theory that there is survival of consciousness after physical death when theories along normal lines and/or ESP (psi) fail to account for all of the evidence. ∙ There is no doubt that in a relatively short period of time, science has made great strides in understanding the physical world. 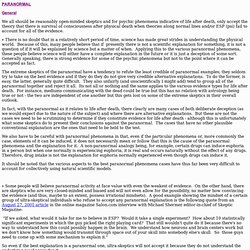 Because of this, many people believe that if presently there is not a scientific explanation for something, it is not a question of if it will be explained by science but a matter of when. Applying this to the various paranormal phenomena, these people believe science will either have a complete explanation in the future or it is just a deception of some sort. The Ghosts Of Roman Soldiers Walking On Their Knees. 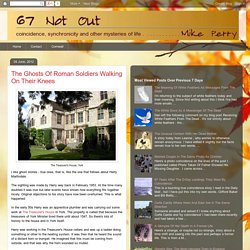 The sighting was made by Harry way back in February 1953. At the time many doubted it was true but later events have shown how everything fits together nicely. Original objections to his story have now been overturned. Paranormal And Weird. Paranormal, UFOs, Cryptids and Unexplained Phenomena. I came across several interesting stories recently while reading about Jewish mysticism and rituals. 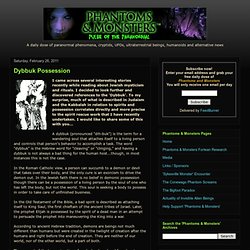 I decided to look further and discovered references to the 'Dybbuk'. 7 Animals With Heart Shaped Markings. A collection of animals with heart shaped markings that we have been able to find around the web. We are fairly positive that most of them are real animals with real markings - not created with photoshop. Click on the image source links to find out more information about each animal. 1. A Cat Image Source. The Real Ghosts of Sleepy Hollow. For centuries, one location in the United States has captivated the collective creepy imagination. 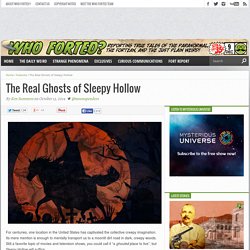 Its mere mention is enough to mentally transport us to a moonlit dirt road in dark, creepy woods. Still a favorite topic of movies and television shows, you could call it “a ghouled place to live”, but Sleepy Hollow will suffice. Now, Sleepy Hollow is indeed a real place. It’s not the same as it was back in 1818 when Irving penned his classic American ghost story, but almost two centuries later, the town still celebrates its biggest claim to fame. Formerly known as North Tarrytown, this village was renamed Sleepy Hollow in 1996 to pay homage to Irving’s story and identify itself as the home to America’s very first wildly popular ghost story. When you think of New York, the legendary ghost ship known as the Flying Dutchman is certainly not a connection you might draw. A Dickens of a Wreck: When Reality Haunts Fiction. In the 19th Century, railroad travel could be a traumatic experience. 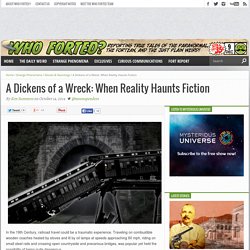 Traveling on combustible wooden coaches heated by stoves and lit by oil lamps at speeds approaching 60 mph, riding on small steel rails and crossing open countryside and precarious bridges, was popular yet held the possibility of being quite dangerous. Famed psychologist Sigmund Freud held a strong fear of rail travel. Encounter With Black Eyed Kids Terrifies Airman on Texas Military Base. I think it’s a pretty good bet that no creature terrified people more in 2013 than the Black Eyed Kids, and with good reason. 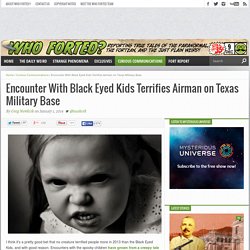 Encounters with the spooky children have grown from a creepy tale whispered about on internet message boards to major plot points in Hollywood films, begging the question – are the BEK’s the new Bigfoot? While that remains to be seen, the stories of personal run-ins with the Black Eyed Kids keep racking up in our inbox.. and our nightmares. Urban Explorers make gruesome discovery in Odessa Catacombs. Time for a public service announcement: while secret, underground parties that happen in places like the off-limits areas of the Paris Catacombs look like a blast, they’re illegal for a reason. 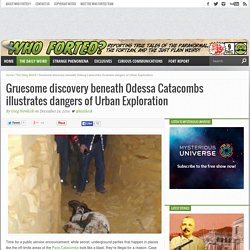 Case in point – it’s really, really, really easy to get lost, as one poor girl discovered after a party in Odessa. Odessa, just outside of Ukraine’s capital, Kiev, is home to one of the largest catacombs in the entire world. World's Oldest Living Janus Cat Dies at 15. When a one day old kitten with a rare birth defect arrived at Tuft’s University in 1999 to be euthanized, no one could have anticipated that one day, he would end up in the Guinness World Records. 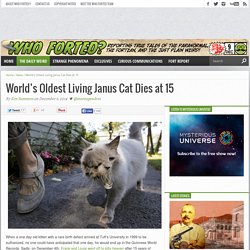 Sadly, on December 4th, Frank and Louie went off to kitty heaven after 15 years of relatively normal cat life. On average, diprosopus cats only survive for a few days after birth. More commonly, the condition (found occasionally in many different animals as well as humans) is referred to by the name of the two-faced Roman god of beginning and transitions: Janus. Unlike conjoined twins, Janus cats are caused by abnormal protein activity resulting in the duplication of either individual facial features or the entire face. Frank (left) and Louie (right) shared a common brain but each had their own unique face. Rats! We've Got Tokoloshe! Soundtrack for this image is “Yakkity Sax”, a.k.a. the Benny Hill theme music. 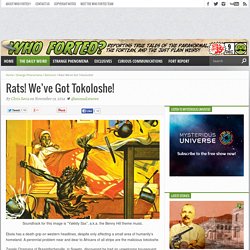 Ebola has a death grip on western headlines, despite only affecting a small area of humanity’s homeland. A perennial problem near and dear to Africans of all stripe are the malicious tokoloshe. Zanele Chamana of Braamfischerville, in Soweto, discovered he had an unwelcome houseguest. A giant rat. No word if it’s the size of a New York City rat. Who Forted? Exclusive: Ohio's Silver Creek Wolfmen. “I don’t care of you believe me or not” was the serious, straightforward introduction I was given to a possible wolfman sighting in the autumn of 2013. 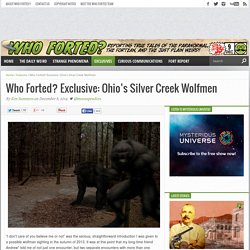 It was at this point that my long-time friend Andrew* told me of not just one encounter, but two separate encounters with more than one strange, bipedal creatures out hunting game near Norton, Ohio. A heavily-wooded section of Chippewa Loop Trail in Silver Creek Metro Park. Andrew normally works night shifts, which means traveling quiet, darkened roads is an everyday occurrence for him. One cold autumn night in particular, while traveling down Johnson Road bordering Silver Creek Metro Park, what he saw was anything but routine. Approximately 50 yards from the intersection with Medina Line Road, he stopped his car when two deer raced across the road heading south. Santa As An Enigmatic Entity. The roots of the modern interpretation of Santa Claus are often traced back to the mid-19th Century poem, “A Visit From St Nicholas” by Clement Moore.

Though the poem has also been attributed to others, for our discussion, let us leave that argument for another time. Our concern here is with the words of the poem more so than who wrote it. It is from this poem that modern Christmas, in regards to Santa Claus, takes most of its images. Yes Forteans, (Maybe?) There is a Santa Claus. “VIRGINIA, your little friends are wrong. New York's 1880 Close Encounter of the Third Kind. In the remote hills of New York State, there may have been an unreported Close Encounter of the Third Kind (CEIII).* This may seem unremarkable until it’s revealed that the event occurred in the latter half of the 19th Century.

You read that correctly; this particular incident is said to have happened around 1880–more than half a century before Roswell and the sci-fi hysteria of little green (or grey) men. Passed down through the generations by their younger brother as an unusual family tale, the story is set in the remote hills near Cameron, New York (then known as Cameron Mills), in April of 1880. Ghosts of the Ghoul Of Grays Harbor. If you ever find yourself in Aberdeen, Washington, craving a bite to eat, you can find some great pub grub at Billy’s on the corner of East Heron and South G Streets. There you’ll find yourself surrounded by nostalgia from Aberdeen’s past. The town was built on the shipping and logging industry; it was a land of rough and rugged men. Though the Pacific Northwest is known for its milder, wet climate, a different sort of northern clipper found its way south to Aberdeen in 1902 to chill the citizens to the bone. Aliens and UFOs.