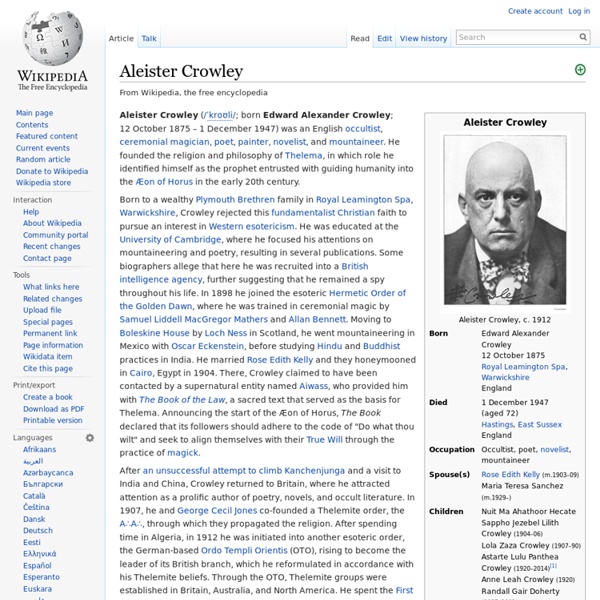 After an unsuccessful attempt to climb Kanchenjunga and a visit to India and China, Crowley returned to Britain, where he attracted attention as a prolific author of poetry, novels, and occult literature. In 1907, he and George Cecil Jones co-founded a Thelemite order, the A∴A∴, through which they propagated the religion. After spending time in Algeria, in 1912 he was initiated into another esoteric order, the German-based Ordo Templi Orientis (OTO), rising to become the leader of its British branch, which he reformulated in accordance with his Thelemite beliefs. Through the OTO, Thelemite groups were established in Britain, Australia, and North America. He spent the First World War in the United States, where he took up painting and campaigned for the German war effort against Britain, later revealing that he had infiltrated the pro-German movement at the behest of the British intelligence services. Early life[edit] Youth: 1875–94[edit] Cambridge University: 1895–98[edit] Had! [edit]

L. Ron Hubbard Lafayette Ronald Hubbard (March 13, 1911 – January 24, 1986), better known as L. Ron Hubbard (/ɛl rɒn ˈhʌˌbərd/, ELL-ron-HUB-ərd[2]) and often referred to by his initials, LRH, was an American author and the founder of the Church of Scientology. After establishing a career as a writer, becoming best known for his science fiction and fantasy stories, he developed a self-help system called Dianetics which was first expounded in book form in May 1950. He subsequently developed his ideas into a wide-ranging set of doctrines and rituals as part of a new religious movement that he called Scientology. His writings became the guiding texts for the Church of Scientology and a number of affiliated organizations that address such diverse topics as business administration, literacy and drug rehabilitation.

Learn Your Mayan Sign Today is your spiritual birthday. The energy of the day you are born is fully active. Today you are in the day of Serpent and 10, and also week of the Owl. This is a very special day that comes around every 260 days. Therefore, today, life seems very meaningful to you. John Whiteside Parsons John Whiteside Parsons (born Marvel Whiteside Parsons; October 2, 1914 – June 17, 1952), better known as Jack Parsons, was an American rocket engineer, chemist, and Thelemite occultist. A pioneer in solid-fuel rocket research and development, he was affiliated with the California Institute of Technology (Caltech), and was one of the principal founders of both the Jet Propulsion Laboratory (JPL) and the Aerojet Engineering Corporation. Born in Los Angeles, California, and raised into a wealthy family in Pasadena, Parsons developed an early interest in rocketry inspired by science fiction literature, and in 1928 began amateur rocket experiments with school friend Edward Forman.

Brave New World Revisited (1958) by Aldous Huxley Contents Foreword I Over-PopulationII Quantity, Quality, Morality III Over-Organization IV Propaganda in a Democratic Society V Propaganda Under a Dictatorship VI The Arts of Selling VII Brainwashing VIII Chemical Persuasion IX Subconscious Persuasion X Hypnopaedia XI Education for Freedom XII What Can Be Done? Foreword The soul of wit may become the very body of untruth. However elegant and memorable, brevity can never, in the nature of things, do justice to all the facts of a complex situation.

Hillary’s sorry state of affairs WASHINGTON — A State Department whistleblower has accused high-ranking staff of a massive coverup — including keeping a lid on findings that members of then-Secretary Hillary Clinton’s security detail and the Belgian ambassador solicited prostitutes. A chief investigator for the agency’s inspector general wrote a memo outlining eight cases that were derailed by senior officials, including one instance of interference by Clinton’s chief of staff, Cheryl Mills. Any mention of the cases was removed from an IG report about problems within the Bureau of Diplomatic Security (DS), which provides protection and investigates crimes involving any State Department workers overseas. “It’s a coverup,” declared Cary Schulman, a lawyer representing the whistleblower, former State Department IG senior investigator Aurelia Fedenisn.“The whole agency is impaired.

Divination. Divination: The Synchronous Universe. Divination (from the Latin divinare "to foresee, to be inspired by a god", related to divinus, divine) Article: By Alex Whitaker 2011 Although today divination is largely considered to be a false 'science', there is no doubt that in the past a great emphasis and respect was placed on those who claimed to be capable of it. Divination methods vary by culture and religion but in all cases, divination relies on a symbolic key to decipher the underlying meaning of physical events. The principle behind divination, is that it recognizes an essential link between our inner and outer reality. Through it, we do not see ourselves as isolated beings but part of a unified cosmos, and great wisdom is said to be found through analyzing the apparently random phenomena of the physical world.

Ken Livingstone In 1999 Livingstone sought Labour's nomination to be the first elected Mayor of London; opposed by Labour Prime Minister Tony Blair and by left-wing Labour MPs Bernie Grant and Clive Soley,[3] the former Labour leader Neil Kinnock, the left-wing then-Cabinet Minister Clare Short,[4] and others in the Labour Party,[3] he successfully contested the 2000 election as an independent candidate, leading to his expulsion from Labour. During his first term, he organised a major upgrade of London's transport system, introducing the congestion charge and Oyster card. Rejoining Labour, he was re-elected in 2004, continuing and expanding his transport policies through mandatory bus and cycling lanes. Initiating and overseeing London's winning bid to host the 2012 Summer Olympics and ushering in a major redevelopment of the city's East End, he initiated improvements in energy saving and recycling, and enacted environmental and civil rights policies.

Archaeological Investigations of the McMartin Preschool site E. Gary Stickel, Ph.D. Archaeological Investigations of the McMartin Preschool site , Manhattan Beach, California by E. Gary Stickel, Ph.D. Executive Summary BACKGROUND METHOD HYPOTHESES AND TEST EXPECTATIONS Part II FINDINGS CONCLUSIONS SUMMATION Executive Summary During the month of May 1990 an archaeological project was conducted at the McMartin Preschool site to determine, once and for all, whether or not there had ever been tunnels under the building, as described by various children. Excavation was carried out according to established scientific conventions with a careful research design defining what might prove or disprove the existence of "an underground feature that would connect to the surface of the site and extend underground for some distance..

Omniscience Omniscience /ɒmˈnɪʃəns/,[1] mainly in religion, is the capacity to know everything that there is to know. In particular, Hinduism and the Abrahamic religions (Judaism, Christianity, and Islam) believe that there is a divine being who is omniscient. An omniscient point-of-view, in writing, is to know everything that can be known about a character, including past history, thoughts, feelings, etc. Police spies scandal: call for public inquiry Lord Macdonald said the police appeared to have 'lost their moral compass' and suggested units had 'gone rogue'. Photograph: Frank Baron for the Guardian Lord Macdonald, the former director of public prosecutions, has called for a public inquiry into undercover policing following the Guardian's revelations about officers who stole dead children's identities and formed sexual relationships with members of anti-capitalist and environmental protest groups. Macdonald said the police appeared to have "completely lost their moral compass", suggested some units had "gone rogue" and said the "drip, drip, drip" of "seedy and corrosive" stories threatened to undermine public confidence. An inquiry was needed to ensure such tactics were still not being used.