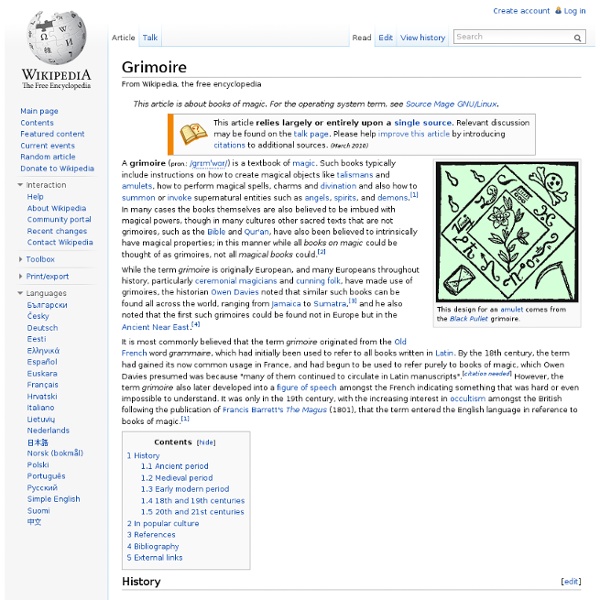 While the term grimoire is originally European and many Europeans throughout history, particularly ceremonial magicians and cunning folk, have made use of grimoires, the historian Owen Davies noted that similar books can be found all across the world, ranging from Jamaica to Sumatra,[3] and he also noted that the first grimoires could be found not in Europe but in the Ancient Near East.[4] Etymology[edit] History[edit] Ancient period[edit] "Many of those [in Ephesus] who believed [in Christianity] now came and openly confessed their evil deeds. A number who had practised sorcery brought their scrolls together and burned them publicly. Notwithstanding the accounts of Biblical figures like Moses, Enoch and Solomon being associated with magical practices, when Christianity became the dominant faith of the Roman Empire, the early Church frowned upon the propagation of books on magic, connecting it with paganism, and burned books of magic. Medieval period[edit] Early modern period[edit] Related:  Paranormal

Grimoires Warning : the following documents deal with magic and should not be used without proper care and deep knowledge of this art. The word grimoire is from the Old French grammaire, or grammar. Latin "grammars" (books on Latin syntax and diction) were considered in the Middle Ages as books of basic instruction. Today, a grimoire is considered as a book of magical knowledge, with instructions for its use to achieve certain ends. They contain various magical formulas or symbols such as astrological correspondences, incantations and ritual instructions for working with angels and conjuring spirits and demons as well as directions on casting charms and spells, on mixing medicines, and making talismans. To understand the real content, one must delve into the life and times of the magicians who wrote them and decipher the symbols that were used to hide the real secrets. More about the Necronomicon

Paimon - Wikipedia "Labal" redirects here. For the village in Iran, see Labal, Iran. According to The Goetia: The Lesser Key of Solomon the King, Paimon is one of the Kings of Hell, more obedient to Lucifer than other kings are, and has two hundred (one hundred according to other authors) legions of demons under his rule. He has a great voice and roars as soon as he comes, speaking in this manner for a while, until the conjurer compels him and then he answers clearly the questions he is asked. When the conjurer invokes this demon he must look towards the northwest (the west to other authors), for there is where he has his house, and when Paimon appears he must be allowed to ask what he wishes and be answered, in order to obtain the same from him. Other spellings: Paimonia, Paymon According to S. See also[edit] Sources[edit]

Grimorium Verum The Grimorium Verum (Latin for True Grimoire or The Grimoire of Truth) is an 18th-century grimoire attributed to one "Alibeck the Egyptian" of Memphis, who purportedly wrote in 1517. Like many grimoires, it claims a tradition originating with King Solomon. The grimoire is not a translation of an earlier work as purported, its original appearing in French or Italian in the mid-18th century, as noted already by Arthur Edward Waite who discussed the work in his The Book of Ceremonial Magic (1911), stating: "The date specified in the title of the Grimorium Verum is undeniably fraudulent; the work belongs to the middle of the eighteenth century, and Memphis is Rome." One version of the Grimoire was included as "The Clavicles of King Solomon: Book 3" in one of the French manuscripts S. "At the end there are some short extracts from the Grimorium Verum with the Seals of evil spirits, which, as they do not belong to the Key of Solomon proper, I have not given. Editions[edit] References[edit]

Resurrection - New Hampshire's Longest Running Goth/Industrial Club Night Lesser Key of Solomon - Wikipedia The Lesser Key of Solomon, also known as Clavicula Salomonis Regis[note 1] or Lemegeton, is an anonymous grimoire (or spell book) on demonology. It was compiled in the mid-17th century, mostly from materials a couple of centuries older.[1][2] It is divided into five books—the Ars Goetia, Ars Theurgia-Goetia, Ars Paulina, Ars Almadel, and Ars Notoria.[1][3] Ars Goetia[edit] The most obvious source for the Ars Goetia is Johann Weyer's Pseudomonarchia Daemonum in his De praestigiis daemonum. Weyer does not cite, and is unaware of, any other books in the Lemegeton, indicating that the Lemegeton was derived from his work, not the other way around.[1][4] The order of the spirits was changed between the two, four additional spirits were added to the later work, and one spirit (Pruflas) was omitted. This portion of the work was later translated by S. The Seventy-Two Demons[edit] Ars Theurgia Goetia[edit] Ars Paulina[edit] Ars Almadel[edit] Ars Notoria[edit] Editions and translations[edit] Notes[edit]

Icelandic magical staves Icelandic magical staves (sigils) are symbols called Galdrastafur in Icelandic, and are credited with magical effect preserved in various grimoires dating from the 17th century and later.[1] According to the Museum of Icelandic Sorcery and Witchcraft, the effects credited to most of the staves were very relevant to the average Icelanders of the time, who were mostly subsistence farmers and had to deal with harsh climatic conditions.[1] Table of magical staves[edit] Font[edit] See also[edit] References[edit] ^ Jump up to: a b "Staves or magical signs"Jump up ^ Lbs 4375 8vo, Iceland, 1900-1949 in the National Library in ReykjavíkJump up ^ From a 17th-century grimoire, in the Antikvarisk-Topografiska Arkivet in Stockholm.Jump up ^ [1] Huld Manuscript ÍB 383 4] in the National Library in ReykjavíkJump up ^ From a 19th-century manuscript, lbs 4375 8vo, in the National Library in Reykjavík.Jump up ^ External links[edit]

Control of the astral body Now that Winter is firmly established in the Northern Hemis (Oceania laughs) it's time to look at activities for shut-ins. This question was originally asked back in 1977 e.v., but it has been brought up again recently. Q. How do I "switch on" my astral body? I am having problems getting out of my physical body. -- originally from UT, but lately repeated. This matter of switching on the astral body is a personal trick. I will be analytical, in as much as I have Virgo rising. I. We will look at each of these twelve problems in a bit, but first let's go over what to expect from an astral body transfer. The experience of being the in astral body can be very different at different times. FORM: The astral body may be any size. MOVEMENT: The motions of an astral body are usually like those of a partly animated cartoon. SENSES: All the senses of the physical body are potentially present, but usually only sight and kinesthesia are active. -- TSG (Bill Heidrick)