Elements of a Story 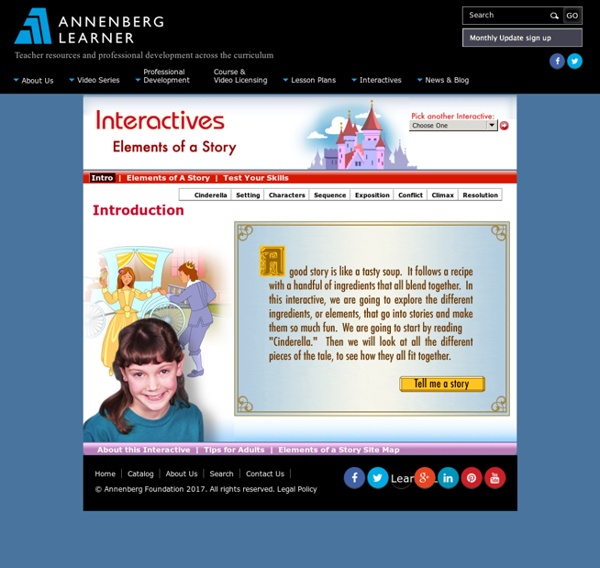 Google Lit Trips for Young Readers Where in the world will our youngest readers travel as they discover the world of books! Reading About Reading Kind Words Site Map Site Search Exploration and Trade Tools developed in the Middle Ages for exploration continued to be used during the Renaissance. One of these was the astrolabe, a portable device used by sailors to help them find their way. By measuring the distance of the sun and stars above the horizon, the astrolabe helped determine latitude, an important tool in navigation. Another tool, the magnetic compass, which had been invented in the twelfth century, was improved upon during the Renaissance. Maps, too, became more reliable as Portuguese map makers, called cartographers, incorporated information provided by travelers and explorers into their work. Shipbuilding also improved during the Renaissance, as large ships called galleons became common.

Active Listening: Using Times Videos, Podcasts and Articles to Practice a Key Skill Listening is a skill that we’re in danger of losing in a world of digital distraction and information overload, writes Seth S. Horowitz in “The Science and Art of Listening.” He continues: And yet we dare not lose it. Because listening tunes our brain to the patterns of our environment faster than any other sense, and paying attention to the nonvisual parts of our world feeds into everything from our intellectual sharpness to our dance skills.… “You never listen” is not just the complaint of a problematic relationship, it has also become an epidemic in a world that is exchanging convenience for content, speed for meaning.

The sounds of English and the International Phonetic Alphabet © Tomasz P. Szynalski, Antimoon.com This chart contains all the sounds (phonemes) used in the English language. For each sound, it gives: The symbol from the International Phonetic Alphabet (IPA), as used in phonetic transcriptions in modern dictionaries for English learners — that is, in A. C. Be a better writer in 15 minutes: 4 TED-Ed lessons on grammar and word choice There’s no denying it — the English language can be mighty tricky. When writing a paper, a novel or even an e-mail, you might look at a sentence you just wrote and think, “Is that comma supposed to be there?” or “Is that really the best word to use?” Fear not! TED-Ed has put together a list of four of our favorite grammar and language lessons to get your next piece of writing in tip-top shape. First, let’s look at the often-confusing comma.

Best Young Adult Novels, Best Teen Fiction, Top 100 Teen Novels It's almost a cliche at this point to say that teen fiction isn't just for teens anymore. Just last year, the Association of American Publishers ranked Children's/Young Adult books as the single fastest-growing publishing category. Which is why we were only a little surprised to see the tremendous response that came in for this summer's Best-Ever Teen Fiction poll. The Witches - Roald Dahl Witches absolutely detest children. To a witch, a child smells like dogs' droppings. And now the Grand High Witch is planning to get rid of every child in England - can anybody stop them? The Witches tells the story of a brave young boy and his Norwegian grandmother as they battle against England's child-hating witches. It continues to feature in lists dedicated to the scariest children's books more than 30 years after it was first published.

The Best Poems for Kids As a father of five children who loves to read to them at night, I’ve learned a thing or two about which poems play best for kids. In fact, I’d say there are three key types that appeal to kids the most: Short PoemsFunny PoemsRhyming Poems This post links to several kids poems of each type (in fact, the best!) and includes some commentary for why I think each poem type succeeds with children.

This free resource gives students the opportunity to practice their reading comprehension by reading a story and then completing quizzes about the reading. It also gives teacher the option to print the results. by ccasas5 Jul 18

Related:
Related:  English   -  literature   -  English   -  ESL   -  narrative tools   -  Narrative Designer   -  Myths and Legends - Myths and Legends from E2BN   -  ReadWriteThink: Student Materials: Plot Diagram   -  Create A Plot Outline In 8 Easy Steps   -  Crime Fiction Collective: Set up Your Story in the First Paragraphs   -  How to Write a Synopsis of Your Novel   -  6 Writing Outline Templates and 3 Reasons to Use Them — Self Publishing Team   -  8 simple formula plot templates | The Wise Sloth   -  How to Plot a Character Driven Book in 3 Easy Steps | Robyn DeHart   -  How to Write a Script Outline | The 8 Essential Plot Points   -  How to Plot a Novel With Index Cards | eHow   -  How It Works | Holacracy   -  Writers Plot Idea Generator - create a random story line   -  25 Unique Places to Find Story Ideas   -  Marquee — A publishing system built just for you   -  Creative Writing Worksheets--The Writer's Craft   -  How to Organize and Develop Ideas for Your Novel   -  NOVA Elements on the App Store on iTunes   -  Writing Fiction: How to Structure a Killer Novel Ending   -  Genetics   -  Freytag's Pyrmaid   -  Plot Generator   -  Damn it Neil, the name is Nuwanda. | 10 Ways to Create a Plot Twist   -  The%20Story%20Spine.pdf   -  How To Write A Novel Using The Snowflake Method   -  Famous Authors’ Handwritten Outlines for Great Works of Literature – Flavorwire   -  The NEW Periodic Table Song (In Order) - YouTube   -  Here's what Pangea looks like mapped with modern political borders   -  Grammar Girl : Active Voice Versus Passive Voice :: Quick and Dirty Tips ™   -  The Making of the Fittest: Got Lactase? The Co-evolution of Genes and Culture   -  Skillswise - Sentence structure   -  Purdue OWL Writing Exercises   -  How a Scene List Can Change Your Novel-Writing Life   -  Plot Generator   -  How to tell a great story, visualized | TED Blog