6 Real Islands Way More Terrifying Than The One On 'Lost' 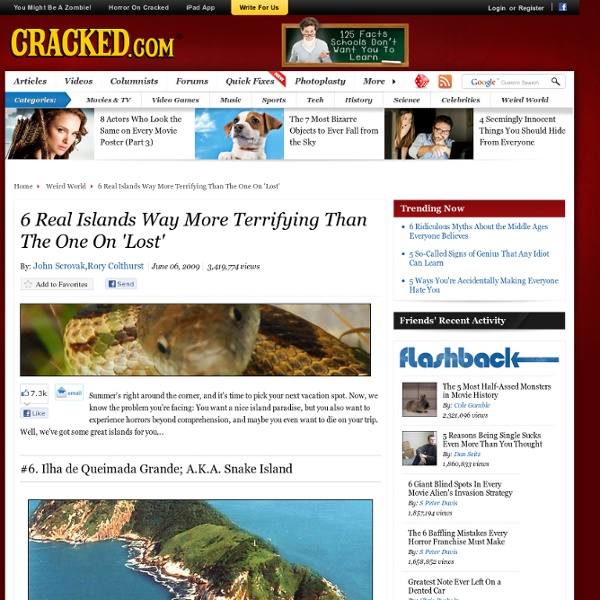 Summer's right around the corner, and it's time to pick your next vacation spot. Now, we know the problem you're facing: You want a nice island paradise, but you also want to experience horrors beyond comprehension, and maybe you even want to die on your trip. Well, we've got some great islands for you... Ilha de Queimada Grande; A.K.A. Snake Island Over at Forests.org, there's an article that opens with a description of, "A deserted island where the forest floor writhes with the world's most venomous vipers. And no, Forests.org is not a site for terrifying Indiana Jones / Anaconda slash-fiction. Now you may be asking, "But Cracked, there are poisonous snakes in loads of countries. Remember how we mentioned the snakes only live on this one island? Not pictured: The dead people just out of shot. Now imagine five of those. Let's back up and talk about that fisherman: And the lighthouse keeper's family? Yeah. Think of the scariest premise you can for a horror movie. The year is 1945. Related:  Paranormal And Weird

10 Explanations Behind Supposedly Unsolved Mysteries Mysteries People want to believe in magic and miracles, so we often enjoy unsolved mysteries more than any other kind of story. For that reason, the stories of the mysteries persist—even long after we discover the actual explanations behind them. 10Atlantis Atlantis first captured our imaginations during the time of the Greek philosophers, when Plato mentioned the mysterious land in his letters to Socrates. The story was an allegory. Furthermore, modern science has proven beyond a shadow of a doubt that Atlantis did not exist. Some supporters of Atlantis believe the scope of the myth can be adjusted to fit islands, though none that match its description has been found. 9The Shroud Of Turin Pope Benedict called the Shroud of Turin the authentic burial robe of Jesus. The shroud was the focal point of discussions for centuries. Only one burial shroud from Jesus’s time has been found. 8Auras Auras are a focal point of New Age beliefs. 7The Lost Colony 6Anastasia 5The Flying Dutchman Mr. Amazing?

Welcome to Strangeusa.com! 10 Mysteries That Hint At Forgotten Advanced Civilizations Mysteries Prehistory literally means the time “before we had written records” (roughly the time before the 4th Century BC) and ancient history is the time since our recorded history. Our concept of ancient history was originally firmly determined by the bible. Written from an insular point of view, the histories of some ancient cultures were distorted, badly neglected or even omitted. The existence of inexplicable monuments, certain man-made marvels and archaeological finds pertaining to our ancient- and prehistory, are leading more and more archaeologists to believe long forgotten advanced civilizations existed. Ancient knowledge was a lot more refined and developed than we have been taught hitherto. Despite wars and several invasions, India’s ancient history was largely preserved. Considered by the Chinese to be the “Ninth Wonder of the Ancient World”, the origin of the 24 caves thus far uncovered is an unfathomable mystery.

Cryptozoology Online: Centre for Fortean Zoology (CFZ) - the world's best cryptozoology organisation - main page 10 Fascinating Artifacts Of Mysterious Origin Mysteries A lot of the things that archaeologists dig up out of the ground are fairly straightforward—we know what people did with arrowheads and pots. But occasionally, we’ll turn up something that leaves experts scratching their chins and wondering “What’s that all about?” 10Middle Eastern Circles You may well be familiar with the Nazca Lines in Peru, ancient geoglyphs only properly visible from above. The “Wheels” are circular stone structures built in the desert from Syria to Saudi Arabia. The purpose of the structures is unclear. 9Fort Mountain A trail marker tells hikers in Georgia they are approaching a “mysterious and prehistoric wall.” The loose rock wall measures around 270 meters (885 ft) long and up to 2 meters (7 ft) tall in some sections. The obvious theory behind the wall says it was used to defend the mountain from attack, but this seems unlikely. The wall zigzags in a way that matches patterns found on some Native American pottery. 8Derek Mahoney’s Glastonbury Cross Dr.

The Mystery Casebook - Cryptids, Bigfoot, Loch Ness Monster, Chupacabra, Sea Monsters, Aliens, UFO News, Mysterious Places, Photos, Video 5 Mysterious Ruins That Predate Known Civilization? - The Epoch Times The universe is full of mysteries that challenge our current knowledge.In “Beyond Science” Epoch Times collects stories about these strange phenomena to stimulate the imagination and open up previously undreamed of possibilities. Are they true? You decide. Artifacts and ruins discovered all over the world have made many scientists question whether the currently accepted understanding of prehistoric culture is correct. Here’s a look at some disputed sites, thought by some to hold evidence of prehistoric civilizations far more advanced than scientists thought possible. 1. (Bosnian Pyramid via Shutterstock) Carbon dating shows the Bosnian Pyramid is 25,000 years old. Two Italian archaeologists, Dr. When the Bosnian Pyramid was first discovered in 2005, researchers could only measure the age of the topsoil covering the pyramid, which is about 12,000 years old. Dr. While many local scientists back Osmanagich, there are skeptics. 2. (Wikimedia Commons) 3. 4. (Sea of Galilee via Shutterstock) 5.

Paranormal, UFOs, Cryptids and Unexplained Phenomena This is a follow up to the Possible Bigfoot Detected - Yadkin River, Davie County, NC post from Thursday, July 28th. I received two emails, one on Friday and the other this morning, that referenced 'something' stalking the same general area. Both witnesses requested to remain anonymous at this time: Concerning the 'Bigfoot on the Yadkin River in Davie County'. I live several miles up river from where this event took place. When I first started hearing the howls it happened on a regular basis from about 10:00P.M. to 1:00A.M. or 2:00 A.M. Please do not reveal my name or contact info if you publish this letter. I read your piece about an unknown animal or possible Bigfoot in Davie County. I have heard stories of sightings but people around here kind of keep these things quiet. I have received several inquiries from investigators since I posted the original email. I had also posted the following that referenced a supposed juvenile Bigfoot photographed in Arkansas: Later....

Daily Grail Frontpage 6 Legendary Lost Treasures That Are Still Up for Grabs Video games and old movies give us the impression that the whole world is filled with treasure chests, tombs full of bling, and random pockets of riches here and there just waiting to be picked up, but that's ridiculous -- only some parts of the world are like that. That's right -- lost treasures do exist. And plenty of them. However, if gold coins were as easy to get as Mario makes it look, someone would have done it already. That's why awesome finds like the following are still unclaimed after centuries ... or at least they were, before we posted this article. #6. Alexandre-Olivier Oexmelin Florida gets a bad rep, what with all the heat, humidity, and overall Floridaness of the place. Schmitt family"And they called us crazy after the first 12 years of random, fruitless searching!" The best part is that there's way more where that came from ... although the 1,000 Spanish sailors who had to drown for that treasure to get there probably don't see it that way. And then it wasn't. #5. #4.

Monstrous.com Top 10 Unsolved Mysteries of Science Despite what cable news may tell you, scientists don’t really squabble over if evolution is real (it is) or if the climate is changing faster than can be explained by naturally-occurring phenomena (it is) or if vaccines are regarded as safe and recommended for most children (they are). Sure, there may be fine points within those categories that are debatable, but not to the extent that is commonly described by talking heads on TV. However, that’s not to say that scientists perfectly understand everything about the ways of the Universe. Physicist Brian Cox once said: “I'm comfortable with the unknown—that’s the point of science. There are places out there, billions of places out there, that we know nothing about. And the fact that we know nothing about them excites me, and I want to go out and find out about them. So what are some of the top mysteries keeping scientists busy? Why is there more matter than antimatter? Where is all the lithium? Why do we sleep? How does gravity work?