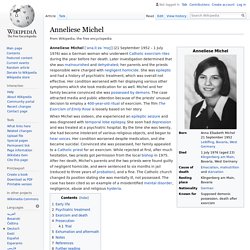 Later investigation determined that she was malnourished and dehydrated; her parents and the priests responsible were charged with negligent homicide. She was epileptic and had a history of psychiatric treatment, which was overall not effective. Her condition worsened with her displaying various other symptoms which she took medication for as well. Michel and her family became convinced she was possessed by demons. The case attracted media and public attention because of the priests' unusual decision to employ a 400-year-old ritual of exorcism. Early life[edit] Psychiatric treatment[edit] In June 1970, Michel suffered a third seizure at the psychiatric hospital where she had been staying.

Exorcism and death[edit] Bishop Josef Stangl (May 1959) who approved the exorcism ordering total secrecy. Token Rock - Inspiration for life. Reincarnation Station: Find out what you'll be in your next life! Order of Nine Angles - Wikipedia. One of the main symbols of the ONA[1] The Order of Nine Angles (ONA; O9A) is a Satanic and Left-Hand Path occult group based in the United Kingdom, but with affiliated groups in various other parts of the world. 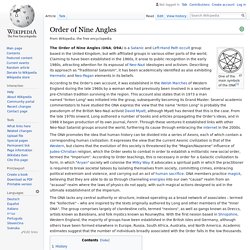 Claiming to have been established in the 1960s, it arose to public recognition in the early 1980s, attracting attention for its espousal of Neo-Nazi ideologies and activism. Describing its approach as "Traditional Satanism", it has been academically identified as also exhibiting Hermetic and Neo-Pagan elements in its beliefs. According to the Order's own account, it was established in the Welsh Marches of Western England during the late 1960s by a woman who had previously been involved in a secretive pre-Christian tradition surviving in the region. This account also states that in 1973 a man named "Anton Long" was initiated into the group, subsequently becoming its Grand Master.

Astrology.com - Horoscopes, Tarot, Psychic Readings. The Museum of Unnatural Mystery Homepage. Skin-walker - Wikipedia. Background[edit] In the Navajo language, yee naaldlooshii translates to "by means of it, [he or she] goes on all fours".[1] While perhaps the most common variety seen in horror fiction by non-Navajo people, the yee naaldlooshii is one of several varieties of Navajo witch, specifically a type of ’ánti’įhnii.[1] The legend of the skin-walkers is uncertain, mostly due to reluctance to discuss the subject with outsiders (in part because strangers may be witches themselves), thus people are led to draw their own conclusions from the stories they hear.[2] Navajo people are reluctant to reveal skinwalker lore to non-Navajos, or to discuss it at all among those they do not trust.[3] See also[edit] Notes[edit] ^ Jump up to: a b Wall, Leon and William Morgan, Navajo-English Dictionary. 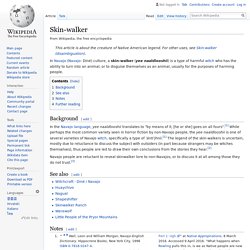 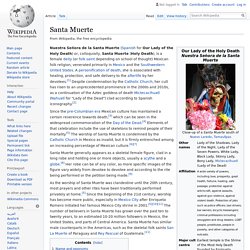 Elizabeth Báthory. Countess Elizabeth Báthory de Ecsed (Báthory Erzsébet in Hungarian, Alžbeta Bátoriová in Slovak; 8 August 1560 – 21 August 1614) was a countess from the renowned Báthory family of nobility in the Kingdom of Hungary. She has been labelled the most prolific female serial killer in history and is remembered as the "Blood Countess", though the precise number of victims is debated. After her husband Ferenc Nádasdy's death, she and four collaborators were accused of torturing and killing hundreds of girls, with one witness attributing to them over 650 victims, though the number for which they were convicted was 80.[4] Due to her rank, Elizabeth herself was neither tried nor convicted, but promptly imprisoned upon her arrest in December 1610 within Csejte Castle, Upper Hungary, now in Slovakia, where she remained immured in a set of rooms until her death four years later. 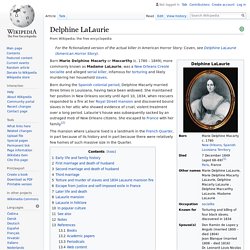 Glensheen Historic Estate - Wikipedia. Glensheen, the Historic Congdon Estate is a mansion in Duluth, Minnesota, United States, operated by the University of Minnesota Duluth as a historic house museum. 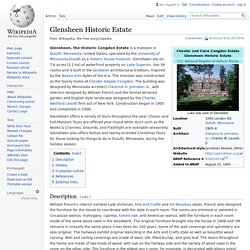 Glensheen sits on 7.6 acres (3.1 ha) of waterfront property on Lake Superior, has 39 rooms and is built in the Jacobean architectural tradition, inspired by the Beaux-Arts styles of the era. The mansion was constructed as the family home of Chester Adgate Congdon. The building was designed by Minnesota architect Clarence H. Johnston Sr., with interiors designed by William French and the formal terraced garden and English style landscape designed by the Charles Wellford Leavitt firm out of New York.

Construction began in 1905 and completed in 1908. Glensheen offers a variety of tours throughout the year. Lesser Key of Solomon - Wikipedia. The Lesser Key of Solomon, also known as Clavicula Salomonis Regis[note 1] or Lemegeton, is an anonymous grimoire (or spell book) on demonology. 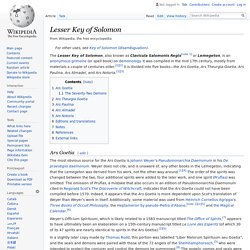 It was compiled in the mid-17th century, mostly from materials a couple of centuries older.[1][2] It is divided into five books—the Ars Goetia, Ars Theurgia-Goetia, Ars Paulina, Ars Almadel, and Ars Notoria.[1][3] Ars Goetia[edit] The most obvious source for the Ars Goetia is Johann Weyer's Pseudomonarchia Daemonum in his De praestigiis daemonum. Paimon - Wikipedia. "Labal" redirects here. 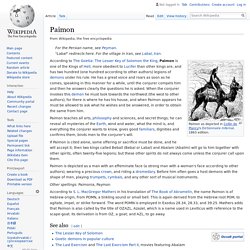 For the village in Iran, see Labal, Iran. According to The Goetia: The Lesser Key of Solomon the King, Paimon is one of the Kings of Hell, more obedient to Lucifer than other kings are, and has two hundred (one hundred according to other authors) legions of demons under his rule. He has a great voice and roars as soon as he comes, speaking in this manner for a while, until the conjurer compels him and then he answers clearly the questions he is asked. When the conjurer invokes this demon he must look towards the northwest (the west to other authors), for there is where he has his house, and when Paimon appears he must be allowed to ask what he wishes and be answered, in order to obtain the same from him. Other spellings: Paimonia, Paymon According to S.

Grimoire. While the term grimoire is originally European and many Europeans throughout history, particularly ceremonial magicians and cunning folk, have made use of grimoires, the historian Owen Davies noted that similar books can be found all across the world, ranging from Jamaica to Sumatra,[3] and he also noted that the first grimoires could be found not in Europe but in the Ancient Near East.[4] Etymology[edit] History[edit] Ancient period[edit] "Many of those [in Ephesus] who believed [in Christianity] now came and openly confessed their evil deeds. 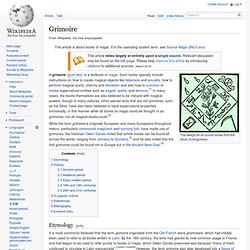 A number who had practised sorcery brought their scrolls together and burned them publicly.