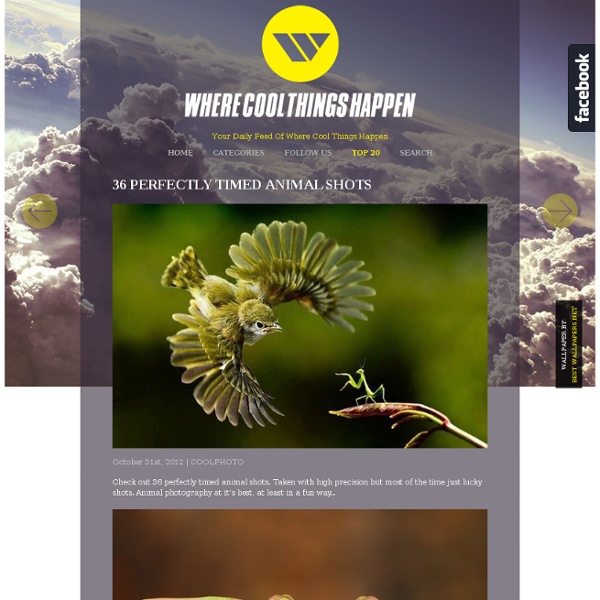 The 15 Craziest Things In Nature You Won’t Believe Actually Exist Mother Nature is beautiful and amazing because we can see many amazing stuff like these 15 things that you won’t believe they actually exist. All these places are real. It is hard to believe in that, but that is true. 1. The Beauty Of Cinemagraph GIFs Developed in 2011 by Jamie Beck and Kevin Burg, cinemagraphs are GIF images that combine still photography and video to produce a stunning effect. Typically, the entire GIF is motionless except for one or two elements, providing a brilliant juxtaposition between the motion and the motionless. For your viewing pleasure, we’ve collected 43 beautiful cinemagraph GIFs:

Whitelines Snowboarding - 2012: a bloody good year for extreme sports 2012 has been a pretty remarkable year for extreme sports and on top of the ‘lympics, a damn good one for sport in general at that. This ‘People are Awesome‘ style compilation picks out some of the key extreme sports achievements and events of the past year and we think it does a pretty stellar job of summing everything up. On the snowboarding front they’ve included 16 year old Yuki Kadono’s backside triple cork 1440 at the Beijing Air and Style and Travis Rice winning the Red Bull Supernatural. Good to see that they haven’t overlooked Tom Schaar’s first ever 1080 on a skateboard or Trevor Jacob’s first ever double cork/backflip either. Earth's Green Places Mapped in High Resolution Map courtesy NASA/NOAA Earth's gone green in recently released satellite images showing our planet's vegetation (pictured here, the entire planet). Using the NASA/NOAA Suomi NPP satellite, scientists can now detect subtle differences in greenness on the 25 percent of Earth that's made up of land. (See National Geographic pictures of life in green.) The images—taken between April 2012 and 2013—show the darkest green areas as the lushest, while the pale colors signify sparse vegetation cover due to snow, drought, rock, or urban areas, according to the U.S. National Oceanographic and Atmospheric Administration.

One Glassy Garden: Growing Herbs in Mason Jars Forget the usual terracotta and (ugh!) plastic pots for container gardening. When you grow herbs in mason jars, you can have garden fresh ingredients on hand and also add some style to a sunny windowsill. National Geographic Photo Contest 2012, Part II - In Focus The deadline to enter this year's National Geographic photo contest is coming up -- this Friday, November 30. Back in September, the society started gathering and presenting galleries of submissions, encouraging readers to vote for them as well. Winners will be chosen on or around December 15, 2012. National Geographic was once more kind enough to let me choose some of its entries for 2012 to feature here on In Focus.

My collection of funny emails from my inbox. Subject: 5 MINUTE MANAGEMENT COURSE Lesson 1: A man is getting into the shower just as his wife is finishing up her shower, when the doorbell rings. The wife quickly wraps herself in a towel and runs downstairs. When she opens the door, there stands Bob, the next-door neighbor. Before she says a word, Bob says, "I'll give you $800 to drop that towel." The Bride's Diary - Honeymoons & Holidays: Palau... An Untouched Paradise A virtually untouched series of limestone islands is now easy for Australians to reach, writes David Barbeler for The Age Traveller. As a Westerner who's visited numerous stunning countries corrupted by tourism, I initially had trouble understanding why the people of Palau were getting so excited. Located 800km east of the Philippines, the Republic of Palau is a series of more than 250 limestone islands virtually untouched by tourists. Many compare it to the feel of Bali 30 years ago. Up until April, it use to take Australians about 24 hours to travel there through a limited number of interconnecting flights and/or boats.