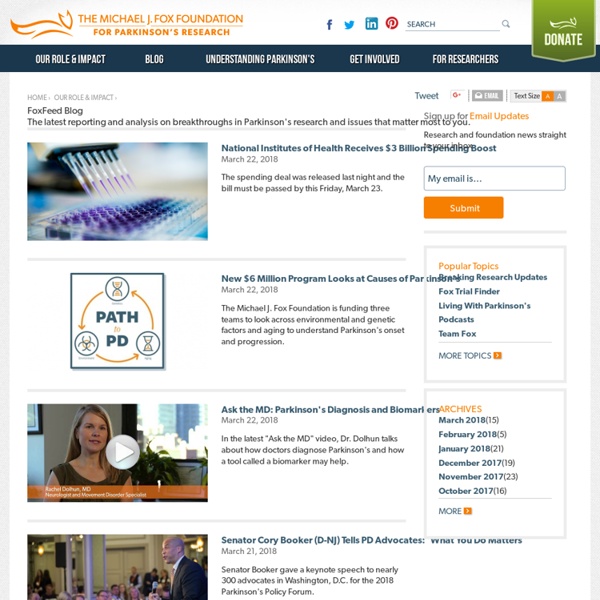 One-Time Monthly In Tribute Team Fox Tweet HOME › Our Role & Impact › FoxFeed Blog The latest reporting and analysis on breakthroughs in Parkinson's research and issues that matter most to you. National Institutes of Health Receives $3 Billion Spending Boost March 22, 2018 The spending deal was released last night and the bill must be passed by this Friday, March 23. New $6 Million Program Looks at Causes of Parkinson's The Michael J. Ask the MD: Parkinson's Diagnosis and Biomarkers In the latest "Ask the MD" video, Dr. Senator Cory Booker (D-NJ) Tells PD Advocates: 'What You Do Matters' March 21, 2018 Senator Booker gave a keynote speech to nearly 300 advocates in Washington, D.C. for the 2018 Parkinson's Policy Forum. Collaboration Most Ambitious Initiative toward a Cure March 20, 2018 The Lancet Neurology calls the AMP PD program the "most ambitious initiative so far to find a cure for Parkinson's." Pharma Company Buys Up MJFF-funded Biotech and Motor Symptom Therapy March 19, 2018 March 14, 2018 Dr.

Cleveland Clinic Joins 23andme In The Search For Genetic Clues To Parkinson’s Disease February 14, 2012 In an effort to study the interactions between genomics and Parkinson’s disease, Cleveland Clinic has joined the ongoing efforts of 23andMe, a leading personal genetics company, to recruit Parkinson’s patients to participate in research by contributing their DNA to a research database and completing online surveys about their health. Currently, little is known about how genes relate to Parkinson’s disease, the effectiveness of treatments, or the natural course of the disease. The goal of this collaborative research effort – which also has support from the Michael J. Fox Foundation, the National Parkinson Foundation and the Parkinson's Institute – is to discover how genes and the environment influence Parkinson's disease. “We are aware of the limitations of today’s treatments, so we are always thinking about what we can do to advance the care of this incurable disease,” said Andre Machado, MD, PhD, Director of Cleveland Clinic’s Center for Neurological Restoration.

Metformin can substantially reduce the risk of Parkinson's disease in diabetes, study suggests A major 12-year study based on a Taiwanese population cohort has demonstrated that not only does diabetes increase the risk of developing Parkinson's disease more than 2-fold, the use of sulfonylureas, commonly used as treatment for diabetes, increases the risk further by about 57%. This study also found that by including metformin in the therapy, no increased risk in developing Parkinson's disease was recorded. Metformin, found in the French lilac, "Galega officinalis," was originally used in traditional European medicine, and introduced into France and Britain in the 1950s for the treatment of diabetes. It has a long and relatively safe record, is off patent and relatively inexpensive. Professor Mark Wahlqvist, lead author of the study commented, "An exciting aspect of the finding is that metformin seems to be working to protect the brain against neurodegeneration which contributes to Parkinsonismin.

'Brain pacemaker' effective for years against Parkinson's disease A "brain pacemaker" called deep brain stimulation (DBS) remains an effective treatment for Parkinson's disease for at least three years, according to a study in the June 2010 online issue of Neurology®, the medical journal of the American Academy of Neurology. But while improvements in motor function remained stable, there were gradual declines in health-related quality of life and cognitive abilities. First author of the study is Frances M. Weaver, PhD, who has joint appointments at Edward Hines Jr. VA Hospital and Loyola University Chicago Stritch School of Medicine. DBS is a treatment for Parkinson's patients who no longer benefit from medication, or who experience unacceptable side effects. In the DBS procedure, a neurosurgeon drills a dime-size hole in the skull and inserts an electrode about 4 inches into the brain. Improvements in motor function were similar in both groups of patients, and stable over time.

Tai chi could benefit Parkinson’s disease patients By Dr Ananya Mandal, MD A new study found that a six-month program of Tai Chi exercises helped people with various stages of Parkinson's disease improve stability, their ability to walk and reduced the frequency of falls. The study, published this week in the compared a six-month tailored Tai Chi program to resistance training and stretching to see which was most effective at improving functional movement, walking and balance for Parkinson's patients. Parkinson's is a neurological disorder caused by a loss of neurons that produce dopamine , a chemical involved with muscle function and movement coordination. That can result in tremors, stiffness, poor coordination and more difficulty doing daily activities. For the study the researchers randomly assigned 195 men and women ages 40 to 85 who were in stages one to four of Parkinson's disease (on a scale of one to five) to the exercise groups. Li explained that Tai Chi has several advantages. Dr.

Freezing Parkinson's in its Tracks Freezing Parkinson's in its TracksWednesday, May 2, 2012 TAU researcher developing therapy to halt symptoms in Parkinson's patients Parkinson's disease, a disorder which affects movement and cognition, affects over a million Americans, including actor Michael J. Fox, who first brought it to the attention of many TV-watching Americans. The ability to modify the activity of DJ-1 could change the progress of the disease, says Dr. Based on a short protein derived from DJ-1 itself, the peptide has been shown to freeze neurodegeneration in its tracks, reducing problems with mobility and leading to greater protection of neurons and higher dopamine levels in the brain. Guarding dopamine levels As we age, we naturally lose dopamine-producing neurons. The researchers set out to develop a therapy based on the protective effects of DJ-1, using a short peptide based on the healthy version of DJ-1 itself as a vehicle. Preliminary tests indicate that the peptide is a viable treatment option.

Sleep Improves Functioning in Parkinson’s Patients, but Reasons Remain Elusive Sleep Improves Functioning in Parkinson’s Patients, but Reasons Remain Elusive New Study Published in the Journal of Parkinson's Disease June 20, 2012 Some Parkinson’s patients report that their motor function is better upon awakening in the morning, which is contrary to what would be expected after a night without medication. This phenomenon, known as sleep benefit, has been studied but no consistent variables have been found and in the last decade there has been little new research. “If the subjective experience of sleep benefit is proven to be related to an objective improvement in motor function, this could have considerable clinical benefits,” says lead investigator Sebastiaan Overeem, MD, PhD, at the Department of Neurology, Donders Institute for Brain, Cognition, and Behavior, Radboud University Nijmegen Medical Centre, The Netherlands. Almost half (46.9%) of the patients experienced sleep benefit. The study found that sleep benefit is not limited to nighttime sleep. Dr. Dr.

Weight Training Improves Parkinson’s Symptoms Twice-Weekly Resistance Training Sessions Can Improve Tremors, Slowness, and Rigidity Why do I need to register or sign in for WebMD to save? We will provide you with a dropdown of all your saved articles when you are registered and signed in. Feb 16, 2012 -- Weight training twice a week may reduce the stiffness, slowness, and tremors often seen in people with Parkinson’s disease, a new study shows. A progressive neurologic disease, Parkinson’s affects up to 1 million people in the U.S. The findings are to be presented at the annual meeting of the American Academy of Neurology in New Orleans. In the study, 48 people with Parkinson’s disease participated in a weight-training program or another program aimed at improving flexibility, balance, and strength. Everyone saw benefits after six months, but these benefits lasted two years among those in the weight-training group. Continue reading below... It is always a good idea to talk to your doctor before beginning a new exercise regimen.

Eating flavonoids protects men against Parkinson’s disease Men who eat flavonoid-rich foods such as berries, tea, apples and red wine significantly reduce their risk of developing Parkinson's disease, according to new research by Harvard University and the University of East Anglia. Published today in the journal Neurology ®, the findings add to the growing body of evidence that regular consumption of some flavonoids can have a marked effect on human health. Recent studies have shown that these compounds can offer protection against a wide range of diseases including heart disease, hypertension, some cancers and dementia. This latest study is the first study in humans to show that flavonoids can protect neurons against diseases of the brain such as Parkinson’s. Around 130,000 men and women took part in the research. The research was led by Dr Xiang Gao of Harvard School of Public Health in collaboration with Prof Aedin Cassidy of the Department of Nutrition, Norwich Medical School at UEA. Photo: UEA/Tristan Conor Holden

UBC team identifies Parkinson's disease gene with help of Saskatchewan Mennonite families June 27, 2012 An international team including scientists from the University of Saskatchewan-Saskatoon Health Region and University of British Columbia, with the help of Saskatchewan Mennonite families, has identified an abnormal gene which leads to Parkinson’s disease. “This discovery paves the way for further research to determine the nature of brain abnormalities which this gene defect produces,” says Dr. Ali Rajput, a world expert in Parkinson’s disease who has been studying the disease for 45 years and working with the main family in the study since 1983. “It also promises to help us find ways to detect Parkinson’s disease early, and to develop drugs which will one day halt the progression of the disease.” The abnormal gene is a mutated version of a gene called DNAJC13, identified by UBC medical genetics professor Matthew Farrer, who led the study. Thirteen of 57 members of one extended Saskatchewan family in the study had been previously diagnosed with Parkinson’s disease.