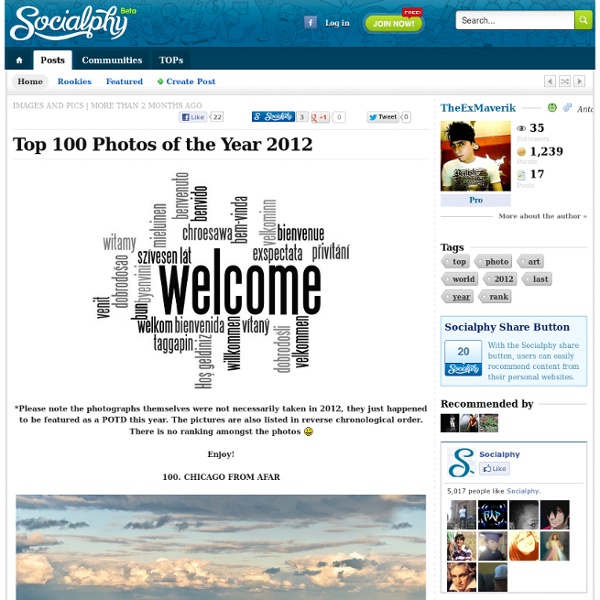 30 Heartwarming Vintage Photographs of New York City ~ ThePhotomag New York can rightly be called one of the most beautiful cities on earth. Every one of you would like to visit the busy city and especially for photographers it is not less than a paradise to take a dream shot. But our today’s post is not to show you the modernity of the New York City. Amazing Places To Experience Around The Globe (Part 1) Preachers Rock, Preikestolen, Norway Blue Caves - Zakynthos Island, Greece Skaftafeli - Iceland Plitvice Lakes – Croatia Crystalline Turquoise Lake, Jiuzhaigou National Park, China

The "World's Largest" Stop Motion Animation Was Created With A Nokia N8 Less than a year after making the world’s smallest animation, Nokia just ticked off that large, lurking item on the to-do list: conjuring the world’s largest stop motion animation. The new film, Gulp, tells the simple story of a fisherman who gets swallowed by a larger predator. It was shot entirely with the Nokia N8 phone. “Strapping the device to a 40-meter high cherry picker on a massive expanse of beach with gale force winds seemed like a good challenge for the smartphone,” says David Bruno, a creative at Wieden + Kennedy London which created the spot along with directing team Sumo Science, from animation studio Aardman, and sand artist Jamie Wardley, from sand and ice sculpture specialists, Sand in Your Eye. Sumo Science, aka Ed Patterson and Will Studd, director of photography Toby Howell and Wardley, literally fought time and tides over the five-day shoot to complete the painstaking animation process before the sea wiped out their efforts.

17 Web Toys for Your Procrastination Pleasure Sometimes you need to take a break from work and just veg out by doing something mindless and pleasant. TV or a game of solitaire is good for that, but both require a set time commitment. There are hundreds of alternatives on the internet in the form of web toys. 55 incredible examples of photo manipulation We present collection of 55 incredible examples of photo manipulation. Some of them... you may know already, but another ones... could be new for you. What I'm sure about... all of them are simply worth of your attention. Cloudscape Photography You can say that, cloudscape photography is photography of cloud or weather and sky. In this photography the photographer takes the photos of weather, cloud with sky or empty sky. American photographer “Alfred Stieglitz” started a chain of clouds photography, in the early to middle 20th century. In our today’s post we have shared “Outstanding Examples Of Cloudscape Photography”.