South Africa's ageing white mercenaries who helped turn tide on Boko Haram. Leon Lotz was once a member of the Koevoet – “crowbar” in Afrikaans – a paramilitary police unit created by South Africa’s apartheid regime to root out guerrillas in what is now Namibia. 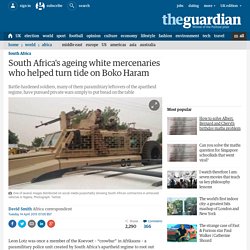 Thirty years later, something persuaded him to take up arms again in a foreign country. He was killed in March, apparently by friendly fire from a tank in northern Nigeria. Among the most striking facts about Lotz was his age: 59. A wealth of media reports, witness accounts and photos on social media suggest that he is not the only white mercenary who helped turn the tide against the Islamist militant group Boko Haram in recent weeks, allowing Nigeria to hold a relatively peaceful election.

Whether as technical advisers or frontline combatants, some are said to have come from the former Soviet Union but about 300 are reportedly from South Africa and nearing retirement age. Who are the members of this dad’s army, willing to risk death abroad and prosecution at home to fight someone else’s war? Blackwater Founder Erik Prince: What Is He Up To These Days? Frontier Services Group. Erik D. 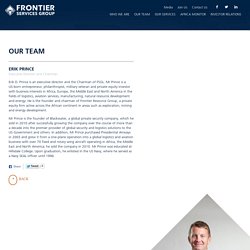 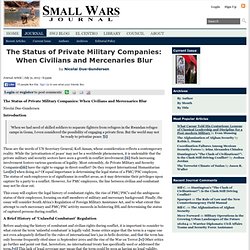 But the world may not be ready to privatise peace.’ [i] These are the words of UN Secretary General, Kofi Annan, whose consideration reflects a contemporary reality. Prince Blackwater of China. Erik Prince — Former Black Water Header Interview. Exclusive: Erik Prince on Blackwater’s Secret CIA Past. The documentary ‘When the Garden Was Eden,’ premiering at the Tribeca Film Festival, focuses on the ‘70s New York Knicks, and how the basketball team served as a refuge for a city plagued by crime. “Now here comes Willis... and the crowd is going wild!” That was Marv Albert’s call on the radio for Game 7 of the 1970 NBA Finals, and even though New York City is seen as some kind of secularist’s utopia or dystopic hellscape depending on your point of view vis-à-vis organized religion, Reed’s entrance is practically a shibboleth for Gotham basketball fans; flash a few stills from the grainy TV footage, and the entire gloriously improbable tale comes spilling out in gushing, reverent tones, as if retelling the deeds of saints. The New York Knicks and the Los Angeles Lakers were tied at three games apiece, but Knicks Captain Willis Reed had suffered a torn muscle in his right thigh during Game 5, and skipped Game 6 entirely. As Araton wrote: Jackson himself wasn’t exempt. But there is hope. Private Security Contractors in Iraq and Afghanistan: Erik Prince Testimony - Legal Issues (2007)

Private Military and Security Companies. The Costs of Outsourcing War People working for private military and security companies (PMSCs) have been accused of engaging in a number of human rights violations including the abuse and torture of detainees, shootings and killings of innocent civilians, destruction of property, sexual harassment and rape, human trafficking in the recruitment of third-country nationals, weapons proliferation, and participation in renditions. 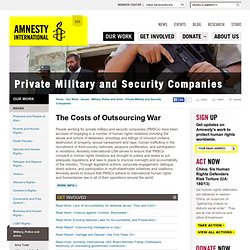 Amnesty International USA strives to ensure that PMSCs complicit in human rights violations are brought to justice and seeks to put adequate regulations and laws in place to improve oversight and accountability of the industry. Through legislative actions, corporate engagement, dialogue, direct actions, and participation in multi-stakeholder initiatives and coalitions, Amnesty works to ensure that PMSCs adhere to international human rights and humanitarian law in all of their operations around the world. More info. U.S. Commandos' New Landlord in Afghanistan: Blackwater. A U.S. 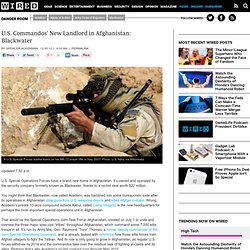 Special Forces soldier trains on his MK-12 sniper rifle in Iraq, 2007. Photo: U.S. Navy via Wikimedia Updated 7:50 a.m. U.S. You might think that Blackwater, now called Academi, was banished into some bureaucratic exile after its operatives in Afghanistan stole guns from U.S. weapons depots and killed Afghan civilians. Pentagon Wants to Keep Running Its Afghan Drug War From Blackwater's HQ. An Afghan soldier in Helmand Province prepares to burn a marijuana field as part of “Operation Crack Back,” 2011. 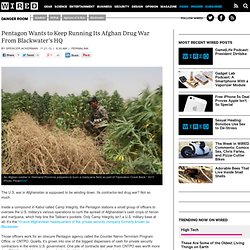 Photo: Flickr/ISAF The U.S. war in Afghanistan is supposed to be winding down. Its contractor-led drug war? Not so much. Inside a compound in Kabul called Camp Integrity, the Pentagon stations a small group of officers to oversee the U.S. military’s various operations to curb the spread of Afghanistan’s cash crops of heroin and marijuana, which help line the Taliban’s pockets. U.S. Ready to Offer Mercenaries $10 Billion for a Drug-War Air Force. Unsure how your private security firm makes money as the U.S. war in Afghanistan winds down? 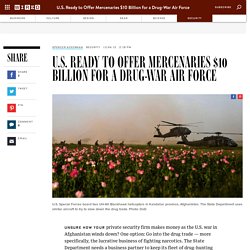 One option: Go into the drug trade — more specifically, the lucrative business of fighting narcotics. The State Department needs a business partner to keep its fleet of drug-hunting helicopters and planes flying worldwide. You could make up to $10 billion-with-a-B. Starting next month in Melbourne, Florida, the State Department will solicit some defense-industry feedback on a contract to help operate its 412 aircraft, based in at least eight nations, before it reopens the contract for bidding. Among the missions the diplomatic corps needs fulfilled: “Provide pilots and operational support for drug interdiction missions such as crop spraying, and the transport of personnel and cargo,” according to a pre-solicitation the department’s bureau of International Narcotics and Law Enforcement Affairs released on Friday.

Post-traumatic stress and the hired gun. 30 September 2012Last updated at 21:09 ET The impact of Post Traumatic Stress Disorder on private security contractors is not known Former SAS soldier Bob Paxman - who served in Iraq as well as other hostile environments - is one of a growing number of former servicemen who say they have suffered with the mental health condition Post Traumatic Stress Disorder (PTSD). 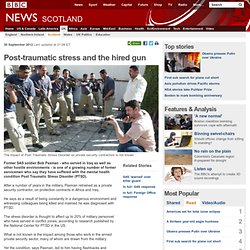 After a number of years in the military, Paxman retrained as a private security contractor, on protection contracts in Africa and Iraq. He says as a result of being constantly in a dangerous environment and witnessing colleagues being killed and maimed he was diagnosed with PTSD. The stress disorder is thought to affect up to 20% of military personnel who have served in conflict zones, according to research published by the National Center for PTSD in the US.

Engelhardt, The Arrival of the Warrior Corporation. [Note for TomDispatch Readers: Many thanks to all of you who answered my modest plea for donations last week with such generosity! 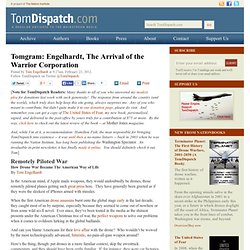 The response from around the country (and the world), which truly does help keep this site going, always surprises me. Any of you who meant to contribute, but didn’t quite make it to our donation page, please do visit. And remember, you can get a copy of The United States of Fear, my new book, personalized, signed, and delivered to the post office by yours truly for a contribution of $75 or more.

Dangerous Partnership- Private Military and Security Companies and the UN (July 10, 2012) United Nation’s use of mercenaries ‘out of control,’ warns watchdog. Watchdog Global Policy Forum warned on Tuesday that the United Nations is using too many private military and security companies. The forum said that the increasing UN use of these companies is “dangerous,” may increase rather than reduce threats and attacks on UN buildings and personnel and suggests the system is “unaccountable and out of control.”

Even incomplete UN data shows a steady rise in the number of security contracts, with the value increasing from $44 million (£28.8m) in 2009 to $76m (£48.8m) in 2010, the latest data available. UN spokesman Martin Nesirky claimed that it is appropriate to use armed private security contractors if the organisation ensures “due diligence” in its operations. The Real Blackwater Scandal. Academi. Academi is a private security services provider founded in 1997 by Erik Prince.[2][3] Formerly and still popularly known as Blackwater,[4] the company was renamed "Xe Services" in 2009, and "Academi" in 2011.[5] The company was purchased in late 2010 by a group of private investors who changed the name to Academi and instituted a Board of Directors and new Senior Management.

Erik Prince retained the rights to the name Blackwater and has no affiliation with Academi. The company received widespread publicity in 2007 when a group of its employees shot at Iraqi civilians killing 17 and injuring 20 in Nisour Square, Baghdad.[6][7] Academi provided diplomatic security services in Iraq to the United States federal government on a contractual basis.[8] The company's headquarters is located in McLean, Virginia.[1] Corporate history[edit] 1997 Blackwater USA[edit] Training Center[edit] 2002 Blackwater Security Company[edit] Jamie Smith along Pakistani border in Afghanistan 2002.

Fallujah Incident. Fallujah Incident: On March 31, 2004 four Blackwater employees by the names of Scott Helvenston, Jerry Zovko, Wes Batalona, and Mike Teague were ambushed and killed in the city of Fallujah by an angry Iraqi mob, their bodies burned and mutilated, and then hung ominously from a bridge. When news of this event hit American media, outrage and anger emanated from the general public, which was exactly the reaction that George Bush and his military commanders hoped would be elicited, giving the green light for U.S. troops to retaliate hard and reinstate American control and dominance in the city with the indignant approval of the American public. Somewhere in the superior chain of command of Erik Prince’s corporation, inexcusable and deliberate oversights had been made when putting together the delivery task.

Special: Blackwater - America's Private Army in Iraq. John Cusack: The Real Blackwater Scandal: Build a Frontier, You Get Cowboys. Two weeks ago, I talked with Naomi Klein about her new book, The Shock Doctrine: The Rise of Disaster Capitalism. If you missed the original video, you can watch it here, and the longer transcript is here. You can also learn more about the book and read excerpts here.

At that point, the Blackwater scandal over the massacre in Baghdad's Nisoor Square was just breaking. Since then, the story has blown wide open, with more mind-boggling details coming to light every day. Blackwater Worldwide News. Case Against Contractors Resurfaces By THE ASSOCIATED PRESS The Justice Department brought fresh charges against four former Blackwater Worldwide security contractors, resurrecting a case over a deadly 2007 shooting in Baghdad. Security Firm Faces Criminal Charges in Iraq.

US: Blackwater Guards Stayed in Iraq Despite Ban. Blackwater admits to facts behind 17 federal charges. The government security contractor formerly known as Blackwater Worldwide has admitted to the key facts behind 17 federal criminal charges, including illegal exports and unauthorized possession of automatic weapons, as part of an effort to end a long-running investigation into the firm's conduct. Blackwater, now known as Academi LLC, agreed to pay a $7.5 million fine on top of a $42 million settlement it reached earlier regarding civil arms export violations. Scandal-Ridden Blackwater Changes Name.

The scandal-ridden security firm Blackwater USA is officially changing its name effective immediately as the company moves to rebrand itself after being fired last month by the State Department from its job protecting diplomats in Iraq. New Blackwater Iraq Scandal: Guns, Silencers and Dog Food. A federal grand jury in North Carolina is investigating allegations the controversial private security firm Blackwater illegally shipped assault weapons and silencers to Iraq, hidden in large sacks of dog food, ABCNews.com has learned. Blog Archive » On Billy Tucci’s Blackwater propaganda comic. The “War On Drugs” Is A $2.5 Trillion Racket: How Big Banks, Private Military Companies And The Prison Industry Cash In. Editor’s Note: After detailing the “War on Terror” racket, many readers emailed asking us to cover the profiteering that is occurring within the “War on Drugs.”

Insider: "The Christian Right is Aiming to Destroy All Things Public" May 13, 2011 | Africa's new breed of 'dogs of war' JOHANNESBURG, South Africa, May 17 (UPI) -- A new generation of soldiers of fortune, successors to the "Dogs of War" who fought in the Congo, Angola and other post-colonial wars, is operating across Africa, except today they're known as Private Military and Security Companies. Requiem for rhodesia. The Rhodesian conflict and the Soldiers of Fortune who became involved. Private military company. Danger Zone Jobs - Overseas Contract Jobs in Iraq, Afghanistan, Kuwait and more. “Private Military Companies – Mercenaries of the Present” Mercenary / Private Military Companies (PMCs) Private military firms likely to stay in Iraq, Afghanistan despite criticism. Afghanistan Contractors Outnumber Troops.