Another Side of History 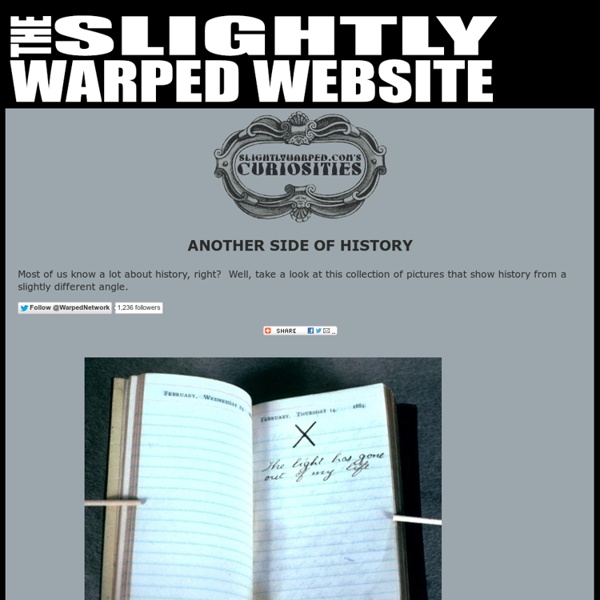 The 100 Best, Most Interesting Blogs and Websites of 2014 Editor’s note: 2015’s list of the best, most interesting websites has arrived! The video above is a sampling from that list. Welcome to the most awesome blog post you’re going to see all year. Yep, it’s the third installment in the super-popular annual series in which I document the sites I think you’ll want to spend a lot of time on in the coming year (below you’ll find a few highlights from recent years in case you missed out). I have one major rule: a site can only appear on this list once, so there are never any duplicates.

Rare Historic Photos May 062014 Like some of you, I’m also a rabid history buff, specializing in collecting the most interesting rare historic photos. I only curate the rare ones that have a significant impact on the history of the world. Find out below some of the most fascinating rare historical photos ever captured on camera. Amazing Planet ‹ Previous PhotoNext Photo › Strokkur Geyser, Iceland Send as postcard | Request for quotes ‹ Prev1…1617181920…40Next › Top 10 Most Overlooked Mysteries in History Mysteries Over the last few months we have gone through 30 of the worlds greatest mysteries but what we haven’t covered are ancient mysteries. This list aims to put that right! Here are ten great unsolved mysteries of science. Do you have a theory that might solve one of these mysteries? If so, tell us in the comments!

29 Incredibly Useful Websites You Wish You Knew Earlier There are so many wonderful websites around, and it is difficult to know each and every one of them. The below list provides some of those websites that I find particularly helpful, even though they are not as famous or as prevalent as some of the big names out there. 1. BugMeNot 40 Photos From The Past The phrase “a picture is worth a thousand words” was coined by American newspaper editor Arthur Brisbane in 1911. It’s a simple notion that applies to many aspects of our lives, but especially to historical photography. Sometimes, one simple picture can tell you more about history than any story you might read or any document you might analyze. [Read more...]

Coca-Cola influences China’s obesity policy, BMJ report says The Coca-Cola Company has shaped China’s policies towards its growing obesity crisis, encouraging a focus on exercise rather than diet and thereby safeguarding its drinks sales, an academic investigation has alleged. Susan Greenhalgh, a Harvard academic and China scholar, says Coca-Cola has exerted its influence since 1999 through a Chinese offshoot of an institute founded in the US by the then Coca-Cola vice-president Alex Malaspina with substantial company funding. The International Life Sciences Institute (ILSI) has been heavily criticised in the US and Europe for promoting exercise and downplaying the need for people to cut down on excessive sugary drinks. China has a serious and growing obesity problem: 42.3% of Chinese adults were overweight or obese in 2011, up from 20.5% in 1991. Its 1.4 billion people constitute Coca-Cola’s third-largest market by volume. ILSI-China, says Greenhalgh, has influence in government circles.

disposableWebPage Hello World. This is LMWIFY, short for “Let Me Write It For You”. LMWIFY lets you create simple yet stunning looking messages on a canvas and distribute it as an image to your family and friends. 60 Rare Photos from The Past Barack Obama on his high school basketball team Source: i.imgur.com Arnold Schwarzenegger in New York for the first time in 1968 Source: imgur.com Native cartography: a bold mapmaking project that challenges Western notions of place Aeon email newsletters are issued by the not-for-profit, registered charity Aeon Media Group Ltd (Australian Business Number 80 612 076 614). This Email Newsletter Privacy Statement pertains to the personally identifying information you voluntarily submit in the form of your email address to receive our email newsletters More generally, when visiting the Aeon site you should refer to our site Privacy Policy here. This Email Newsletter Privacy Statement may change from time to time and was last revised 5 June, 2018. By clicking ‘Subscribe’ you agree to the following: