Schools and Military Face Off. GREECE, N.Y. -- When Capt. 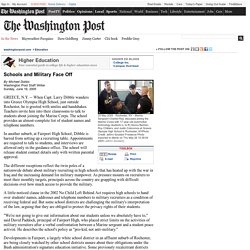 Larry Dibble wanders into Greece Olympia High School, just outside Rochester, he is greeted with smiles and handshakes. Teachers invite him into their classrooms to talk to students about joining the Marine Corps. The school provides an almost-complete list of student names and telephone numbers. In another suburb, at Fairport High School, Dibble is barred from setting up a recruiting table. Appointments are required to talk to students, and interviews are allowed only in the guidance office.

The different receptions reflect the twin poles of a nationwide debate about military recruiting in high schools that has heated up with the war in Iraq and the increasing demand for military manpower. A little-noticed clause in the 2002 No Child Left Behind Act requires high schools to hand over students' names, addresses and telephone numbers to military recruiters as a condition of receiving federal aid. It is a labor-intensive, frequently frustrating business. Military Recruiters Have Gone Too Far.

In its rush to find the next generation of cyberwarriors, the military has begun to infiltrate our high schools and even our middle schools, blurring the line between education and recruitment. 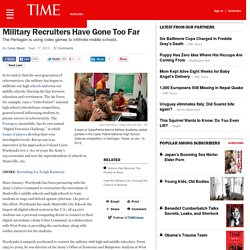 The Air Force, for example, runs a “CyberPatriot” national high school cyberdefense competition, geared toward influencing students to pursue careers in cybersecurity. The Pentagon, meanwhile, has its own annual “Digital Forensics Challenge,” in which teams of players develop their own investigative tools. But no one is as innovative in his approach as Colonel Casey Wardynski (ret.) —for 16 years the Army’s top economist and now the superintendent of schools in Huntsville, Ala. (MORE: Recruiting Is a Tough Business) Since January, Wardynski has been partnering with the Army’s Cyber Command to restructure the curriculum of Huntsville’s middle schools and high schools to train students to wage and defend against cyberwar. (MORE: Is School Just for Getting a Good Job?) Should We End Military Recruiting in High Schools as a Matter of Child Protection and Public Health? Military Forced to Get Picky in Recruiting. 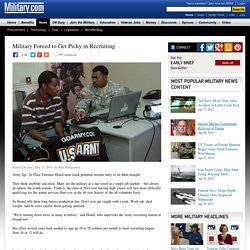 They think anybody can enlist. Many see the military as a last resort in a tough job market -- but always an option, the youth assume. Truth is, the class of 2014 now leaving high school will face more difficulty qualifying for the armed services than ever in the 40-year history of the all-volunteer force. So Hoard tells them long before graduation day: Don't ever get caught with a joint. Work out, shed weight. "We're turning down twice as many as before," said Hoard, who supervises the Army recruiting station in Grandview. His office several years back needed to sign up 16 to 20 soldiers per month to meet recruiting targets.

Last week, a dozen fresh recruits and wannabe warriors showed up for pushups and jumping jacks. DAPA & Expanded DACA - National Immigration Law Center. WARNING: Protect Yourself and Others Against Notario Fraud Do NOT take advice about your immigration case from a notary public or an immigration consultant. 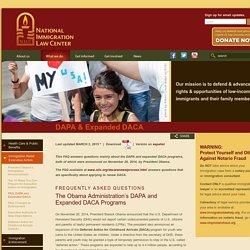 Contact ONLY a qualified immigration lawyer or an accredited representative for legal advice about your case. 6)directory of legal service providers in your area is available at www.immigrationlawhelp.org. For more information on notario fraud, go to www.stopnotariofraud.org. Last updated MARCH 2, 2015 * | Download | Versión en español This FAQ answers questions mainly about the DAPA and expanded DACA programs, both of which were announced on November 20, 2014, by President Obama. The FAQ available at www.nilc.org/dacarenewalprocess.html answers questions that are specifically about applying to renew DACA. The Obama Administration’s DAPA and Expanded DACA Programs On November 20, 2014, President Barack Obama announced that the U.S. Currently, U.S. What is deferred action? Deferred action is granted on a case-by-case basis. How do I apply? Military to allow undocumented immigrants to serve.

A small number of undocumented immigrants in the U.S. will have an opportunity to join the military for the first time in decades under a new Department of Defense policy unveiled Thursday. 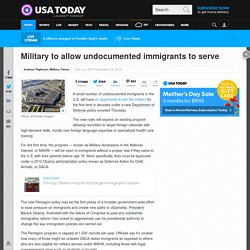 The new rules will expand an existing program allowing recruiters to target foreign nationals with high-demand skills, mostly rare foreign language expertise or specialized health care training. For the first time, the program — known as Military Accessions in the National Interest, or MAVNI — will be open to immigrants without a proper visa if they came to the U.S. with their parents before age 16.