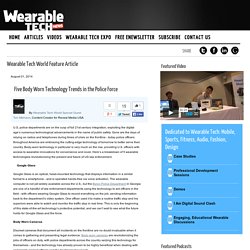 Gone are the days of relying on radios and telephones during times of crisis on the frontline - today police officers throughout America are embracing the cutting-edge technology of tomorrow to better serve their country. Body-worn technology in particular is very much on the rise, providing U.S. officers with access to wearable innovations for convenience and cover. Here’s a breakdown of 5 wearable technologies revolutionizing the present and future of US law enforcement. Google Glass Google Glass is an optical, head-mounted technology that displays information in a similar format to a smartphone - and is operated hands-free via voice activation. Body Worn Cameras Discreet cameras that document all incidents on the frontline are no doubt invaluable when it comes to gathering and presenting legal evidence. Bio-sensing gives new meaning to 'breaking a sweat' Bio-sensing gives new meaning to 'breaking a sweat' Posted 2/27/2015 Updated 2/27/2015 Email story Print story by Michele Eaton 88 ABW Public Affairs 2/27/2015 - WRIGHT-PATTERSON AIR FORCE BASE, Ohio -- Your sweat is more valuable than you think, and now it can be stored, then analyzed by smartphone to give you a clear picture of the state of your body--all with a sensor that looks and wears like a high-tech Band-Aid. 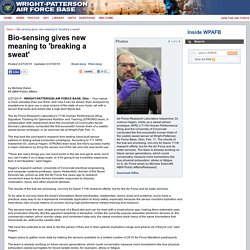 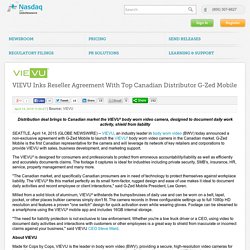 G-Zed Mobile is the first Canadian representative for the camera and will leverage its network of key retailers and corporations to provide VIEVU with sales, business development, and marketing support. The VIEVU² is designed for consumers and professionals to protect from erroneous accountability/liability as well as efficiently and accurately documents claims. The footage it captures is ideal for industries including private security, SMB's, insurance, HR, service, property management and many more. 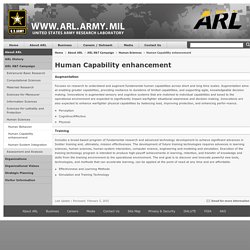 Augmentation aims at enabling greater capabilities, providing resilience to durations of limited capabilities, and supporting agile, knowledgeable decision making. Innovations in augmented sensory and cognitive systems that are matched to individual capabilities and tuned to the operational environment are expected to significantly impact warfighter situational awareness and decision making. Innovations are also expected to enhance warfighter physical capabilities by balancing load, improving protection, and enhancing perfor-mance. Perception Cognitive/Affective Physical Training Includes a broad-based program of fundamental research and advanced technology development to achieve significant advances in Soldier training and, ultimately, mission effectiveness. Wearable Technology to assist Defense Industry and Military. The Department of Defense hopes soldiers and airmen will have an advantage in combat with new technology that is integrated into lightweight and wearable equipment. 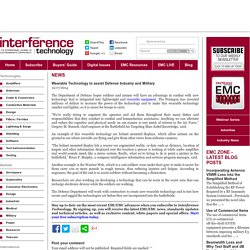 The Pentagon has invested millions of dollars to increase the power of the technology and to make this wearable technology smaller and lighter, so it is easier for troops to carry. “We’re really trying to augment the operator and aid them throughout their many duties and responsibilities that they conduct in combat and humanitarian assistance. Anything we can alleviate and reduce the cognitive and physical needs on our airmen is very much of interest to the Air Force,” Gregory M. Burnett, chief engineer at the Battlefield Air Targeting Man-Aided Knowledge, said. An example of this wearable technology are helmet mounted displays, which allow airmen on the ground to see where aircrafts are flying and give them other views from airborne cameras.