US of A Military Visions

Tc3 22 69. Video. The United States Air Force (USAF) has quietly test-flown a prototype of the Next Generation Air Dominance (NGAD) fighter aircraft which will be a generation ahead of the F-22 and F-35 fifth generation fighter jets, currently the most advanced warplanes in the world. 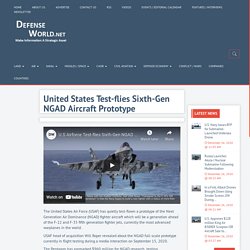 USAF head of acquisition Will Roper revealed about the NGAD full-scale prototype currently in flight testing during a media interaction on September 15, 2020. Soldiers and Civilians: A History of the United States Army Reserve. Since the founding of the United States of America, the idea of the “citizen-soldier” has been an institution of the nation- a civilian who can be called to duty at a moment’s notice should he (and later, he or she) be required to serve their country. 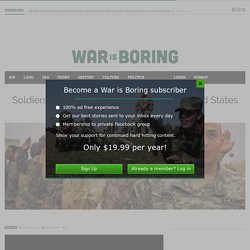 While the Army National Guard (which is older than the Army itself) is often the most publicized, the Army Reserve also deserves its due respect. Established in 1908, the US Army Reserve was initially a medical branch, but later evolved into a variety of support roles for the US Army’s active and National Guard combat components. Today, the Army Reserve has more than 200,000 Soldiers and Civilian employees and 2,000 units spread across 20 time zones. Who Are They? Unmarked Security Forces in DC Spark Fear. Mistaken for mercenaries, armed personnel from federal agencies refuse to identify themselves to street protestors and media. 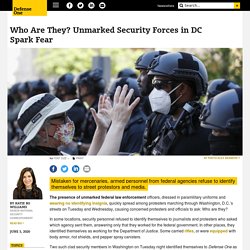 The presence of unmarked federal law enforcement officers, dressed in paramilitary uniforms and wearing no identifying insignia, quickly spread among protesters marching through Washington, D.C.’s streets on Tuesday and Wednesday, causing concerned protesters and officials to ask: Who are they? In some locations, security personnel refused to identify themselves to journalists and protesters who asked which agency sent them, answering only that they worked for the federal government. In other places, they identified themselves as working for the Department of Justice. Navy proposes special operations training in Washington State Parks.

State Parks is reviewing a proposal from the Navy to expand its use of parks in Western Washington for special operations training from five locations to 29. 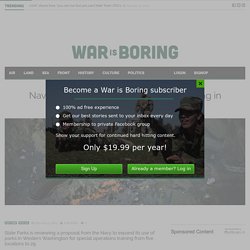 Public comments are being accepted and a public meeting will be held May 6 in Port Townsend. Staff will provide a report to the State Parks Commission on March 12 during a meeting in Chelan, which will be streamed online. During the Vietnam War, the U.S. Army Used Drugs to Build Super Soldiers. “We had the best amphetamines available and they were supplied by the U.S. government,” said Elton Manzione, a member of a long-range reconnaissance platoon (or Lurp). 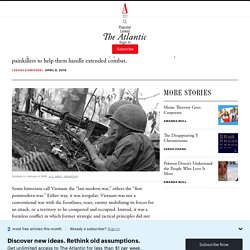 He recalled a description he’d heard from a navy commando, who said that the drugs “gave you a sense of bravado as well as keeping you awake. Every sight and sound was heightened. You were wired into it all and at times you felt really invulnerable.” Soldiers in units infiltrating Laos for a four-day mission received a medical kit that contained, among other items, 12 tablets of Darvon (a mild painkiller), 24 tablets of codeine (an opioid analgesic), and six pills of Dexedrine. Thach Weave. An example of the Thach Weave: An enemy following planes A or B is vulnerable to attack from C and D. 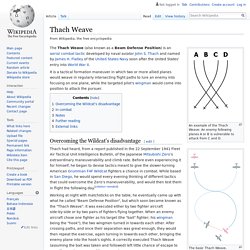 The basic Thach Weave, executed by two wingmen. The Thach Weave (also known as a Beam Defense Position) is an aerial combat tactic developed by naval aviator John S. Thach and named by James H. Flatley of the United States Navy soon after the United States' entry into World War II. And NASA engineers demonstrate a new kind of airplane wing. A team of engineers has built and tested a radically new kind of airplane wing, assembled from hundreds of tiny identical pieces. 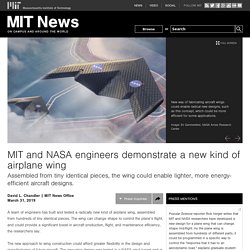 The wing can change shape to control the plane’s flight, and could provide a significant boost in aircraft production, flight, and maintenance efficiency, the researchers say. The new approach to wing construction could afford greater flexibility in the design and manufacturing of future aircraft. The new wing design was tested in a NASA wind tunnel and is described today in a paper in the journal Smart Materials and Structures, co-authored by research engineer Nicholas Cramer at NASA Ames in California; MIT alumnus Kenneth Cheung SM ’07 PhD ’12, now at NASA Ames; Benjamin Jenett, a graduate student in MIT’s Center for Bits and Atoms; and eight others. The result is a wing that is much lighter, and thus much more energy efficient, than those with conventional designs, whether made from metal or composites, the researchers say. U.S. Navy Hydrofoil Ship Project. Ault Report. The Ault Report, or more formally the Air-to-Air Missile System Capability Review, was a sweeping study of US Navy air-to-air missile performance during the period of 1965 to 1968, conducted by Navy Captain Frank Ault. 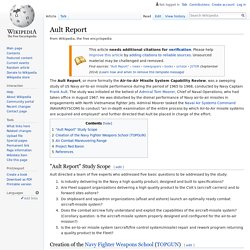 Will Hypersonics Finally Force the Pentagon to Integrate Kinetic and Non-Kinetic Defenses? The Army’s Next Infantry Guns Will Have Computerized Fire Control for Unreal Accuracy. The Navy Just Ordered the 'Orca,' an Extra-Large Unmanned Submarine by Boeing. US Marines are learning how to fight China and Russia in Syria. While much of the conflicts across the Middle East tend toward low tech and low intensity, the fight in Syria is providing Marine commanders with a wealth of knowledge and experience for a future fight with near peer rivals like Russia and China. 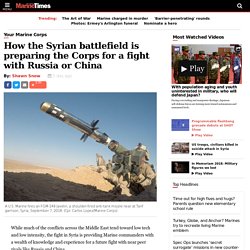 The Syrian battlefield is littered with a host of tech and weapons that range from Cold War relics to drones, sophisticated anti-tank systems, Russian jets and anti-aircraft systems ― even aggressive electronic warfare tech. What We Know About the U.S. Navy's Drone Fleet of the Future. Duffelblog. The US Military Is Genetically Engineering New Life Forms To Detect Enemy Subs. The Pentagon is also looking at living camouflage, self-healing paint, and a variety of other applications of engineered organisms, but the basic science remains a challenge. 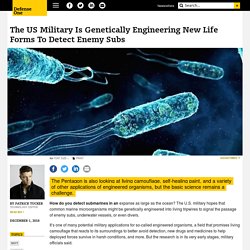 How do you detect submarines in an expanse as large as the ocean? The U.S. military hopes that common marine microorganisms might be genetically engineered into living tripwires to signal the passage of enemy subs, underwater vessels, or even divers. It’s one of many potential military applications for so-called engineered organisms, a field that promises living camouflage that reacts to its surroundings to better avoid detection, new drugs and medicines to help deployed forces survive in harsh conditions, and more. But the research is in its very early stages, military officials said. The U.S. Air Force Has a New War Plan. The U.S. Air Force is rewriting its war plan for the Pacific, the flying branch’s new commander for the region told reporters at the Pentagon in late November 2018.

Gen. Charles Brown, commander of Pacific Air Forces, said he wants smaller groups of U.S. warplanes to rapidly move between bases in order to frustrate an adversary, and to do so while the enemy — that is, China — is jamming American communications. “How do we move small packages around pretty quickly to complicate things for our adversary?” Penny for your thoughts: With Russia in its crosshairs, Canada moves to buy sub hunters. Want to Understand the Future of War? Talk to Chuck Krulak. As Marine commandant, Krulak bucked Pentagon wisdom and rebuilt the Corps for small, messy conflicts. Now his ideas run through the National Defense Strategy, urban-ops doctrine, and Jim Mattis' head. BIRMINGHAM, Ala. — Three days before the Pentagon will publish its new National Defense Strategy, Chuck Krulak opens a 20-year-old PowerPoint deck on a big iMac screen and walks me through its prescient description of the world to come.

“We saw shifting power, to China, India, Indonesia, Vietnam. “Grunts In the Sky” Documentary Showcases the A-10’s Contribution to Modern Warfare. A documentary about the A-10 Warthog close air support jet was has somehow been leaked to the public on social media. The video, “Grunts in the Sky," was withheld from the general public until a Facebook group filed a Freedom of Information Act request.

The video features interviews with A-10 pilots, the Air Force personnel who call in air strikes, and the U.S. Army troops they support on the ground. Advertisement - Continue Reading Below. Here’s How Much of Your Taxes Have Gone To Wars. Previously unreported Pentagon data shows how much the average U.S. taxpayer has paid for combat operations in Afghanistan, Iraq, and now Syria. As of Monday, the average American taxpayer will have paid nearly $7,500 to fund the wars in Afghanistan, Iraq, and Syria since the 9/11 attacks, according to previously unreported Pentagon budget data sent to Congress this summer.

This fiscal year, each U.S. taxpayers will pay about $289 for both wars, according to the Defense Department data. Untitled. Tomorrow Soldier: How The Military Is Altering the Limits of Human Performance. Breakthroughs in biometric science mean future troops will fight with weapons that understand them — inside and out. What the Dogfights of the Past Tell Us About the New Air War Over Syria. Marines: 'The First One Through the Door Should Be a Lethal Robot' New Tactics, Quicker Decisions Are Helping to ‘Annihilate’ ISIS, Pentagon Says. The military’s top leaders credit Trump for delegating authority and directing efforts to surround ISIS fighters.

It’s Not Every Day You See an F-16 and Russian Su-27 Dogfight Above Area 51. By DAVID CENCIOTTI. Weaponized Narrative Is the New Battlespace. And the U.S. is in the unaccustomed position of being seriously behind its adversaries. Conventional military dominance is still critical to the superpower status of the United States.

Platoon sergeant likes to think himself as abusive father figure. The Pentagon’s Law of War Manual: Part one. Law of War Manual June 2015. Huffingtonpost. P3127.pdf. The Army Needs Anthropologists. Sirens of the Potomac: Think Tanks and Torture. William Astore, America's Mutant Military. The Tragedy of the American Military. COST AND PERFORMANCE OF THE AIRCRAFT AND MUNITIONS IN DESERT STORM Appendix IV Operation Desert Storm: Evaluation of the Air Campaign (Letter Report, 06/12/97, GAO/NSIAD-97-134) The War Nerd: More proof the US defense industry has nothing to do with defending America.