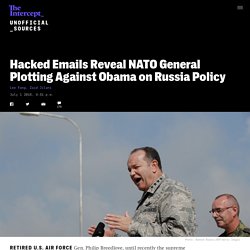 Air Force Gen. Philip Breedlove, until recently the supreme commander of NATO forces in Europe, plotted in private to overcome President Barack Obama’s reluctance to escalate military tensions with Russia over the war in Ukraine in 2014, according to apparently hacked emails from Breedlove’s Gmail account that were posted on a new website called DC Leaks.

Obama defied political pressure from hawks in Congress and the military to provide lethal assistance to the Ukrainian government, fearing that doing so would increase the bloodshed and provide Russian President Vladimir Putin with the justification for deeper incursions into the country. Breedlove, during briefings to Congress, notably contradicted the Obama administration regarding the situation in Ukraine, leading to news stories about conflict between the general and Obama. “I may be wrong, … but I do not see this WH really ‘engaged’ by working with Europe/NATO. Breedlove did not respond to a request for comment. Why Are the U.S. and Iran Sending Warships to the Yemeni Coast? The United States has deployed two more warships to take up position off the Yemeni coast, joining seven other American naval vessels already patrolling the area and a veritable flotilla of Iranian ships that have been rapidly moving toward the war-ravaged country. 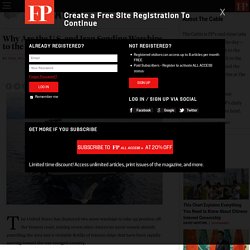 The USS Theodore Roosevelt aircraft carrier and guided-missile cruiser USS Normandy are arriving just as two Iranian warships have taken up position in the Gulf of Aden, heightening tensions between the two rivals just as fighting between Iranian-backed Houthi rebels and Yemeni forces supported by Saudi Arabia and other American allies intensifies. For weeks, a Saudi-led coalition has been conducting daily airstrikes against the Houthis. Washington isn’t taking part in the bombing runs, but the United States has been refueling warplanes from Saudi Arabia and the United Arab Emirates in the air in between bombing runs. White House spokesman Josh Earnest declined to comment on the U.S. How Russia Is Preparing For WWIII. Authored by The Saker, I have recently posted a piece in which I tried to debunk a few popular myths about modern warfare. 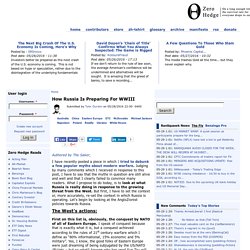 Judging by many comments which I received in response to this post, I have to say that the myths in question are still alive and well and that I clearly failed to convince many readers. What I propose to do today, is to look at what Russia is really doing in response to the growing threat from the West. U.S.: Saudis Can Use Cluster Bombs in Yemen, But Only if They’re Extra Careful. The State Department said it is “looking into” allegations that Saudi Arabia is dropping cluster bombs on targets inside Yemen but said the notoriously imprecise weapon — banned by much of the world — could still have an appropriate role to play in Riyadh’s U.S. 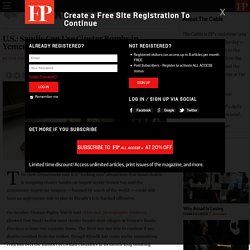 -backed offensive. On Sunday, Human Rights Watch said video and photographic evidence showed that Saudi Arabia used cluster bombs near villages in Yemen’s Saada Province at least two separate times. The NGO was not able to confirm if any deaths resulted from the strikes, though Riyadh has come under intensifying criticism over the number of civilian casualties in its month-long bombing campaign, a trend that is beginning to unnerve Obama administration officials.

The Evil within: The truth we dare not see about Saudi Arabia's war in Yemen. Published time: May 14, 2015 16:11 An air strike hits a military site controlled by the Houthi group in Yemen's capital Sanaa May 12, 2015. 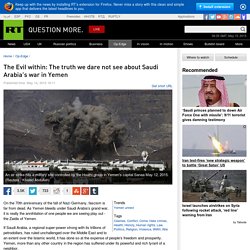 (Reuters / Khaled Abdullah) On the 70th anniversary of the fall of Nazi Germany, fascism is far from dead. Russia and America: Stumbling to War. What It Takes to Win: Succeeding in 21st Century Battle Network Competitions. Success in war is often measured by territory gained and enemies killed. 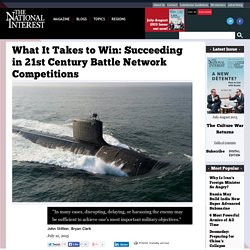 These metrics, however, may not reflect what is really most useful in winning a conflict or military competition. In many cases, disrupting, delaying, or harassing the enemy may be sufficient to achieve one’s most important military objectives. In the short-term, the side using these approaches may be able to gain a temporary advantage toward a larger goal; in the long-term, these approaches may impose significant costs on an enemy in exchange for a relatively small investment. For example, an air defense system can achieve the objective of reducing the number and intensity of air attacks by compelling the attacker to shift an increasing portion of its aerial effort to support missions such as jamming air defense radars or attacking air defense systems–even if the air defenses only infrequently shoot down enemy aircraft.

Reconsidering our metrics isn’t just about making war cheaper, easier, or less lethal. Russia Releases Video Of S-400 SAM Deployment In Syria, As Putin Issues Warning To Obama. Earlier today, Russia made a very explicit demonstration of the deployment of at least two S-400 batteries at Syria's Khmeimim airbase, with the Russian Ministry of Defense promptly publicizing the arrival with the following clip. 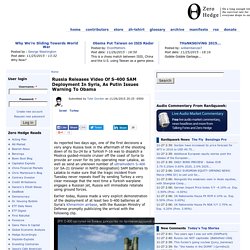 With a range of 250 miles, the S-400 could easily strike Turkish targets, and as the map below shows, Russia could even take down targets over northern Israel. As cited by the Independent, Nick de Larrinaga, Europe editor of the defense magazine IHS Jane’s Defense Weekly, said it would be “a significant increase” in the reach of Russian air-defense capacities. “The message that the Russians are trying to send is that they’re capable of defending themselves in Syria, should the situation escalate. " U.S. Brings Dogfighters to Counter Russians Over Syria. The U.S. military’s biggest mass murder in decades happened under the watch of Dan Fields. 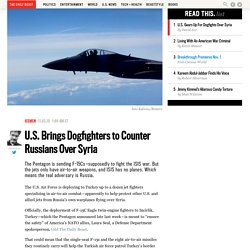 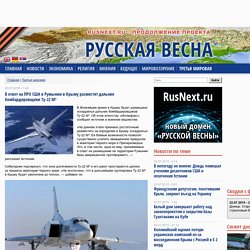 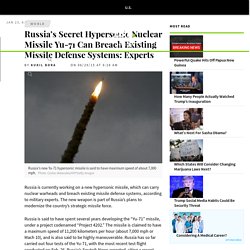 The new weapon is part of Russia’s plans to modernize the country’s strategic missile force. German missile battery receives orders from… unknown ‘hackers’ – report. Ukraine Says Russian Generals Lead Separatists. Five Russian generals are playing a key role in organizing and commanding separatist forces inside Ukraine, according to a dossier provided by Ukraine's security service to the Obama administration last month. The document, obtained by us, is a consensus product of the Security Service of Ukraine and dated June 16. It identifies five Russian generals and a Russian colonel as playing a senior leadership role inside Ukraine. Is Russia's Lethal PAK-FA Fighter Stealthier than America's F-22? Russia’s fifth-generation Sukhoi PAK FA fighter jet, which is also known as the T-50, is like a flying robot with greater stealth capabilities than its American counterparts, according to Russian state media.

On Tuesday, Sputnik outlined some of the specifications of the PAK FA, which is currently undergoing the testing phase and will enter into production next year. “The PAK FA is already to some degree a flying robot, where the aviator fulfils the function not only of pilot, but is actually one of the constituent parts of the flying apparatus,” Vladimir Mikheyev, deputy head of the Concern Radio Electronic Technologies [KRET] unit of Rostech, which helps manufacture the plane, is quoted as saying.

Oleg Kochetkov, a spokesperson for the Western Military District, said, Sputnik reported. The Pentagon Goes Nuclear On Russia. Authored by Pepe Escobar, originally posted at RT.com, We all remember how, in early June, President Putin announced that Russia would deploy more than 40 new ICBMs “able to overcome even the most technically advanced anti-missile defense systems.” Oh dear; the Pentagon and their European minions have been freaking out on overdrive ever since.

First was NATO Secretary-General, Norwegian figurehead Jens Stoltenberg, who condemned it as “nuclear saber rattling.” The Russian Plane China Needs to Rule the South China Sea. Russia appears intent on selling China its most advanced fighter jet by the end of the year, a move that will greatly enhance Beijing’s ability to project military power in the South China Sea. Speaking to reporters at the Paris Air Show this week, Yuri Slyusar, chairman of United Aircraft Corp, a Russian civilian and military jet manufacturer, said his company is aiming to ink a deal with China to sell Beijing 24 Su-35 fighter jets. “Our position is that we still believe that we will sign the contract to sell 24 aircraft this year,” Yuri said, according to multiple Western defense news outlets. He added that the decision would have to be approved by the “federal service on military cooperation.” Russia and China's Moment: Exploiting America's Weakness. Vladimir Putin has recently made a number of statements about Russia's military posture—from promising to match any U.S. deployment of equipment and personnel in Central-Eastern Europe to pledging major increases in Russia's nuclear force.

Should we treat his comments as mere posturing, or be concerned that we are on the verge of returning to Cold War–era conventional and nuclear arms races? And if the latter, isn't that a particularly risky strategy for the Russian government? The Russian economy is in no position to take on a burden of seeking military parity with the United States—an exercise that ultimately helped to bankrupt the Soviet Union, which had a much greater resource base to work from.

For those who look for additional proof that Putin has lost touch with reality, a comment that the Russian Federation, with an economy one-tenth the size of the United States, is really prepared to go toe-to-toe with Washington only confirms that impression. Doomed: Saudi Arabia Will Fail in Yemen. Why America Can't Stop Russia's Hybrid Warfare. Why America Can't Stop Russia's Hybrid Warfare. China warns Philippine military planes away from disputed sea area: Manila. Should Beijing Establish an Air Defense Identification Zone Over the South China Sea? In November 2013, Beijing surprised everyone — both inside and outside China — by declaring an Air Defense Identification Zone (ADIZ) over the East China Sea. An ADIZ extends a country’s airspace, allowing it more time to respond to foreign, and possibly hostile, aircraft. Almost all analysts inside China, including many affiliated with the Ministry of Foreign Affairs, opposed the East China Sea ADIZ: They saw it as an unnecessary provocation — and one that could further destabilize China’s already tense relationship with Japan.

But China’s military, the People’s Liberation Army (PLA), seems to have dominated the decision-making process, ensuring a more aggressive posture. Don’t forget how the Soviet Union saved the world from Hitler. Perverted history: Europeans think US army liberated continent during WW2. The Grisly Truth About How World War II Was Won.

Pentagon mulls sending planes, ships near disputed South China Sea islands. Bullseye: The 5 Most Deadly Anti-Ship Missiles of All Time. After decades of rapid innovation, the end of the Cold War and the subsequent Global War on Terror all but halted anti-ship missile development in the West. A focus on land operations in the Middle East and Central Asia sent Western navies struggling for relevance. As a result, navies adopted an emphasis towards supporting land forces and operating in the littoral zone. For the most part, ship to ship warfare was reduced to a 9,000-ton destroyer confronting a 2-ton pirate skiff.

China's YJ-18 Supersonic Anti-Ship Cruise Missile: America's Nightmare? F-35 Fighter Jets Put to the Test Off North Carolina. Russia Is Set to Triple Nuclear Supersonic Bomber Force. Russia will purchase at least 50 of the newly revived Tupolev Tu-160 (Blackjack) heavy strategic bombers, dramatically increasing its arsenal. ПАК ФА в вихре. Other People’s Armies. At the close of this year’s Formula 1 auto race in Bahrain this April, its organizers announced the latest addition to the global grand prix calendar: Slated for 2016, the world’s premier race series will come to Baku, Azerbaijan. Not coincidentally, the upcoming first-ever European Games (a kind of spring training for the 2016 Summer Olympics in Rio de Janeiro) will also be hosted by Baku. For the next up-for-grabs Winter Olympics — the 2022 Games — the only two contenders are Almaty, in Azerbaijan’s neighbor Kazakhstan, and Beijing, the host of the 2008 Summer Olympics.