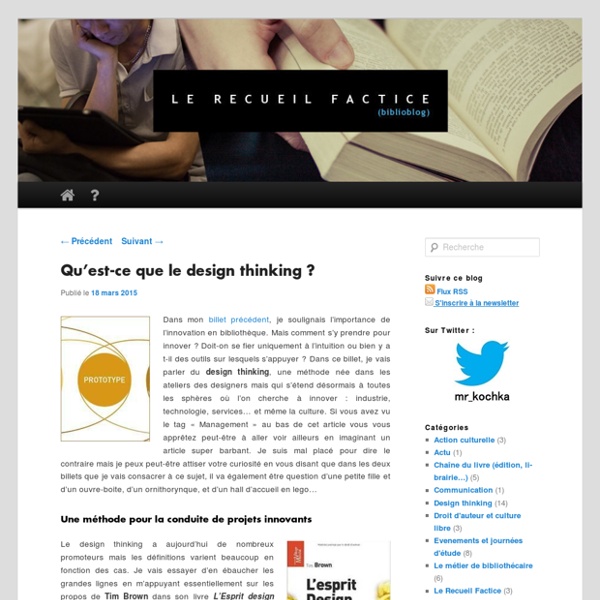 Créer une palette About The Author Cameron Chapman is a professional Web and graphic designer with over 6 years of experience. She writes for a number of blogs and is the author of The Smashing … More about Cameron ↬ While this information is important, I’m sure a lot of people were wondering when we were going to get into the nitty-gritty of actually creating some color schemes. That’s where Part 3 comes in. Here I’ll be talking about methods for creating your own color schemes, from scratch. Design Thinking and PBL While project-based learning has existed for decades, design thinking has recently entered the education lexicon, even though its history can be traced back to Herbert A. Simon's 1969 book The Sciences of the Artificial. So why the resurgence of these ideas? Lately, I have heard teachers and school leaders express a common frustration: "We are _______ years into a _______ initiative, and nothing seems to have changed." Despite redesigning learning spaces, adding technology, or even flipping instruction, they still struggle to innovate or positively change the classroom experience. Imagine innovation as a three-legged stool.

Guide des couleurs d'un développeur Web In this article, Laura Elizabeth shares a simple color workflow that you can use in your next web project. I’ve never been a fan of color theory. I think it’s because I’ve always been a bit hopeless at it. To the Mountains of the Moon: Contents With a land mass of 11.7 million square miles—over three times that of the United States, including Alaska—Africa has always captivated and challenged cartographers. But explorers have been the meaningful mapmakers. Initially, after Bartolomeu Dias first rounded the Cape of Good Hope in 1488, the continent was something for sailors to pass by on the way to India and the spice islands of the East Indies. A 16th‑century map (see Sebastian Münster’s “Totius Africæ tabula” [1554]) even provides basic directions from Portugal on how to do just that: “keep the coast on the left, don’t stop much, and turn due east after rounding the cape.” For two hundred years most Western countries followed those instructions.

Dark mode : astuces pour créer les meilleurs thèmes sombres du web Dim the lights, relax your eyes and save your energy. Dark mode is one of the biggest trends in design, and world-class brands like WhatsApp, Instagram, Google, Facebook and Apple have already jumped on the dark mode design train. Let’s take a look at what these top brands are doing and how you can bring dark mode UI into your own designs. You’ll learn the pros and cons of dark mode and essential best practices when designing for dark mode to make sure your web and app designs look and function perfectly. What is dark mode?

China's model is becoming more popular in Africa than the United States economic model — Quartz More African countries are looking East for inspiration on how to grow and manage their economies. According to a survey by Afrobarometer, China is the second-most popular international presence on the continent, only slightly behind the United States. “China rivals the United States in influence and popularity as a development model,” the report, released today (pdf), concluded. About 30% of 56,000 people surveyed in 36 African countries ranked the US as the most popular model for national development, compared to 24% who ranked China first.

Création de logo: tout ce que vous devez savoir If your company needs a new logo design, you'll probably be exploring your options. Do you go for a completely different logo or tweak the logo design you already have? Either way, you might be questioning: what makes a great logo design? IMF Urges East Africa Nations to Use Good Times to Build Buffers East African nations with economic growth outpacing others on the continent should use the current good times to create cushions against inevitable tough periods, the International Monetary Fund’s director for Africa said. While sub-Saharan Africa’s economic growth is expected to slow to 1.4 percent this year, nations such as Kenya and Rwanda forecast 6 percent expansion as they benefit from lower oil prices and public spending on infrastructure projects. Gross domestic product in Tanzania, which holds natural gas reserves of as much as 58 trillion cubic feet, could grow by more than 7 percent, according to government estimates.

Can Services Drive Africa's Development? The conventional map of Africa’s development path went more or less like this: transfers of capital and technology would ease people out of farming and into factory jobs around cities, while income from the extraction of oil, gas, and minerals would help governments pay for education, health, and infrastructure. At the end of it, most workers would manufacture goods that the world would want to buy—at salaries that workers in richer parts of the world would shun. The problem with this march towards “industrialization” is that it has not happened. Africans did move, and are still moving, into cities.