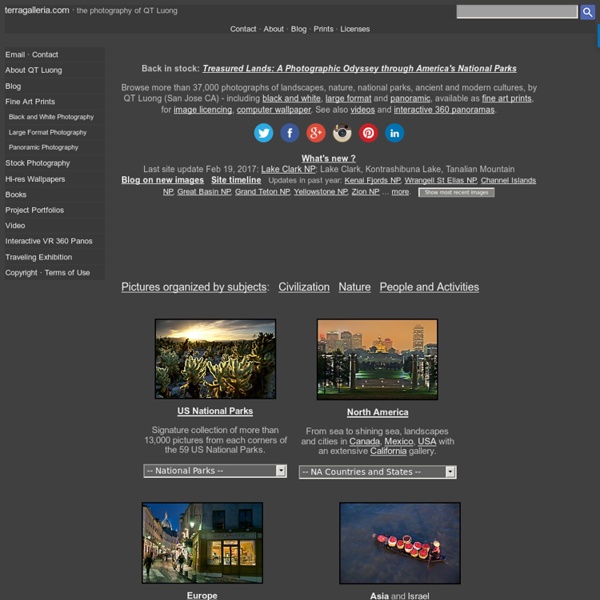 NAture Photos There are 7127 Landscapes Wallpapers in 179 Galleries, Total 12 Index Pages. Landscape photography is a great field of photography, especially if you love nature and if you love to travel. You can travel the world taking pictures of beautiful scenes across many countries. REPRESENTATIONAL : This style results in pictures that show scenery at its most natural and realistic, with no visual manipulation or artifice.

Italy Pictures - Europe stock photos Italy's history, art, architecture, and culture have attracted travelers for several centuries. The country has harbored a refined civilization for two millenia, as demonstrated on a grand scale by the imposing ruins of Rome's imperial past, and on a more daily scale, by the excavations of private villas in Pompei. The great cities of art such as Rome, Venice, Florence, and Siena, are so laden with art, culture, and history, that they sometimes give the feeling of being museums themselves. Color and decoration is present anywhere, from the rainbow colors on the facades of the great Romanesque-Gothic churches, to the pastel multicolored palette of villagers houses. Besides being spread with many architectural treasures, the countryside also often displays a remarkable harmony between the natural environment and the human elements, one that can be reached only by millenia of patient cultivation.

Mitchell Kanashkevich Varanasi India and the Within the Frame Workshop I just got back from leading a Within the Frame Workshop to India. We went to some of my favorite places–Old Delhi, Jodhpur, Bundi, but, a personal highlight was returning to the sacred and ancient city of Varanasi. Continue reading Amazing journeys, camels and challenges. China Photos The temperature in Harbin reaches forty below zero, both Fahrenheit and Celsius, and stays below freezing nearly half the year. This Chinese city is actually further north than notoriously cold Vladivostok, Russia, just 300 miles away. So what does one do here every winter?

Portraits of Dogs as They Shake Off Water For her series “Shake“, pet photographer Carli Davidson photographed curious portraits of dogs shaking off water. Use a fast shutter speed and you can capture all kinds of strange expressions on your dog’s face. You can find the rest of the photographs in the series here. Shake (via Photojojo) Image credits: Photographs by Carli Davidson and used with permission DAISY, DAISY, GIVE ME YOUR ANSWER DO... In 1892, by which time the bicycle was an everyday sight in Victorian life, Henry Dacre composed a song that became immensely popular, both in the London music halls and in America. The lyrics featured a tandem - a bicycle made for two - and the Daisy he described was said to be based on the Countess of Warwick, Frances Evelyn 'Daisy' Greville. Daisy was a champion of women's rights, and also a mistress of the Prince of Wales, and her name is still well-known today from the chorus of Dacre's 'Daisy Bell' -

www.xmarkjenkinsx.com/outside.html Besançon Rome Rio de Janeiro Tudela Jean-François Vibert vibertphoto.com My Account Cart Featured Galleries India / Ladakh & Zanskar Sport / Heliski Canada 2 Pictures of Various Travels David and Bill have many more pictures from the various walks than are shown on the walk pages. Here are some of the extra pictures in large thumbnail form. Check with us from time to time to see the latest batch. The pages require frames and javascript. They are created with Jasc Media Center Plus.