Reverse Retouching: Fattening Up Too-Thin Models. Reverse Photoshop: When Models Are Retouched to Look Healthier. This week, an article in The Huffington Post clued us in to a phenomenon we never considered: reverse Photoshopping. 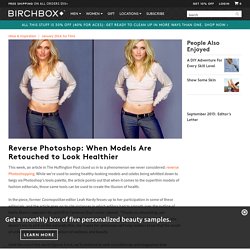 While we're used to seeing healthy-looking models and celebs being whittled down to twigs via Photoshop's tools palette, the article points out that when it comes to the superthin models of fashion editorials, those same tools can be used to create the illusion of health. In the piece, former Cosmopolitan editor Leah Hardy fesses up to her participation in some of these editorials, and the article goes on to cite instances in which editors had to smooth over the outline of Karlie Kloss's exposed ribs and fill in Cameron Diaz's arms (above). "Thanks to retouching, our readers...never saw the horrible, hungry downside of skinny," Hardy regretfully admits. And while she doesn't aim to pick on the naturally thin, she hopes her admission will help readers know that the result of unhealthy dieting isn't the picture of wellness and beauty.

Photo: The Huffington Post Maura M. Reverse retouching- making anorexia look healthy? By: Anita Kulkarni MD As a female plastic surgeon who spends a lot of time thinking about beauty, I was disheartened to see this article in the Huffington Post titled “You’d Be Shocked at What These Fashion Editors are Editing Out of their Photos.” 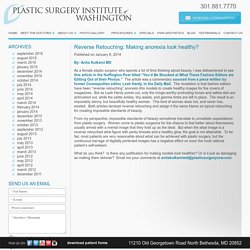 The article was a commentary sourced from a piece written by former Cosmopolitan editor, Leah Hardy, in the Daily Mail. The revelation is that fashion editors have been “reverse retouching” anorexic-thin models to create healthy images for the covers of magazines. But as Leah Hardy points out, only the cringe-worthy protruding bones and sallow skin are airbrushed out, while the petite ankles, tiny waists, and gamine limbs are left in place. The result is an impossibly skinny, but beautifully healthy woman. From my perspective, impossible standards of beauty sometimes translate to unrealistic expectations from plastic surgery. What do you think? Reverse retouching” of models to fatten them up.

“There’s another type of digital dishonesty that’s rife in the beauty industry, and it’s one that you may well never have heard of and may even struggle to believe, but which can be just as poisonous an influence on women. 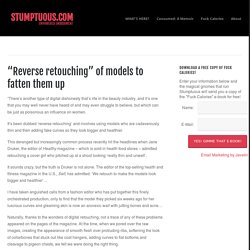 It’s been dubbed ‘reverse retouching’ and involves using models who are cadaverously thin and then adding fake curves so they look bigger and healthier. This deranged but increasingly common process recently hit the headlines when Jane Druker, the editor of Healthy magazine – which is sold in health food stores – admitted retouching a cover girl who pitched up at a shoot looking ‘really thin and unwell’. It sounds crazy, but the truth is Druker is not alone. The editor of the top-selling health and fitness magazine in the U.S., Self, has admitted: ‘We retouch to make the models look bigger and healthier’… Naturally, thanks to the wonders of digital retouching, not a trace of any of these problems appeared on the pages of the magazine.

But now, I wonder. Former Cosmo editor LEAH HARDY on why airbrushing skinny models to look healthy is a big fat (and very dangerous) lie. By Leah Hardy for MailOnline Updated: 07:58 GMT, 20 May 2010 Most of us are sensible enough to know that the photographs of models and celebrities in glossy magazines aren't all they seem. 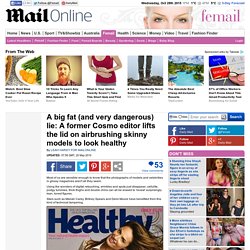 Using the wonders of digital retouching, wrinkles and spots just disappear; cellulite, podgy tummies, thick thighs and double chins can all be erased to 'reveal' surprisingly lean, toned figures. Stars such as Mariah Carey, Britney Spears and Demi Moore have benefited from this kind of technical tampering. 'Reverse retouched': Cover girl Kamila was airbrushed to look healthier Kate Winslet - who shed a couple of stones this way in a shoot for a men's magazine after her normally curvy body was digitally 'stretched' - complained that the practise was bad for women, who could never live up to this kind of fake perfection.

It's been dubbed 'reverse retouching' and involves using models who are cadaverously thin and then adding fake curves so they look bigger and healthier. But now, I wonder.