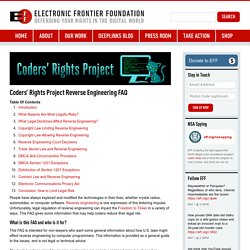 Reverse engineering is one expression of this tinkering impulse. Unfortunately, legal regulation of reverse engineering can impact the Freedom to Tinker in a variety of ways. This FAQ gives some information that may help coders reduce their legal risk. What is this FAQ and who is it for? This FAQ is intended for non-lawyers who want some general information about how U.S. laws might affect reverse engineering by computer programmers. The legal questions raised by reverse engineering are complex and legal risks may depend on particular facts and legal doctrines that are beyond the scope of this general guide. 3879.pdf. 30_3_2.pdf. Hack This Site! Fincrypt2.pdf. Law and technology. The New Zealand Privacy Commissioner’s office has reportedly met with police to discuss a possible criminal investigation into Google’s controversial WiFi data collection. 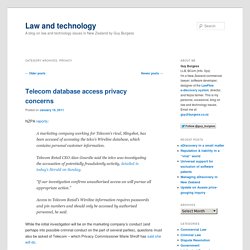 A civil investigation sure, but a criminal one? Really? I hope the police have rather more pressing matters. But let’s do a quick judge-and-jury exercise. Two relevant laws are sections 252 and 216B of the Crimes Act 1961. Section 252, which is often misunderstood and is broader than many people may think, prohibits unauthorised access to computer systems. Section 216B prohibits “intentionally [intercepting] any private communication by means of an interception device”. Copyright and Technology. DRM Anticircumvention for Dummies July 15, 2012 Posted by Bill Rosenblatt in DRM, Law. 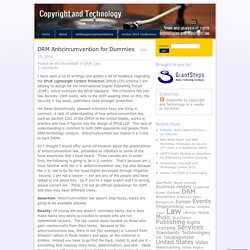 I have seen a lot of writings and gotten a lot of feedback regarding the EPUB Lightweight Content Protection (EPUB LCP) scheme I am helping to design for the International Digital Publishing Forum (IDPF), which oversees the EPUB standard. The criticisms fall into two buckets: DRM sucks, why is the IDPF wasting time on this; the security is too weak, publishers need stronger protection. Yet these diametrically opposed criticisms have one thing in common: a lack of understanding of how anticircumvention law, such as Section 1201 of the DMCA in the United States, works in practice and how it figures into the design of EPUB LCP. EFF to Congress: Get Rid of DMCA's "Anti-Circumvention" Provisions. At a congressional hearing this morning, EFF Intellectual Property Director Corynne McSherry urged lawmakers to abandon the failed “anti-circumvention” provisions of the Digital Millennium Copyright Act (DMCA)—provisions that harm researchers, innovators, and technology users of all kinds. 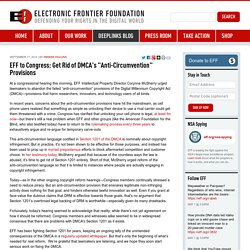 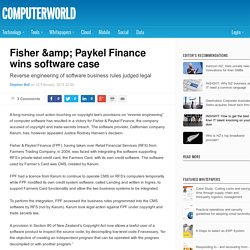 The software provider, Californian company Karum, has, however appealed Justice Rodney Hansen’s decision. Fisher & Paykel Finance (FPF), having taken over Retail Financial Services (RFS) from Farmers Trading Company, in 2004, was faced with integrating the software supporting RFS’s private-label credit card, the Farmers Card, with its own credit software. The software used by Farmer’s Card was CMS, created by Karum.

FPF had a licence from Karum to continue to operate CMS on RFS’s computers temporarily while FPF modified its own credit system software, called Lending and written in Ingres, to support Farmers Card functionality and allow the two business systems to be integrated. Chikofsky.pdf. Yale Law Journal - The Law and Economics of Reverse Engineering. 111 Yale L.J. 1575 (2002) Reverse engineering has a long history as an accepted practice. 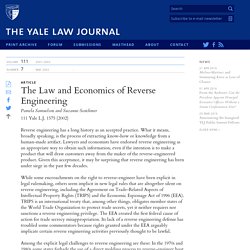 What it means, broadly speaking, is the process of extracting know-how or knowledge from a human-made artifact. Lawyers and economists have endorsed reverse engineering as an appropriate way to obtain such information, even if the intention is to make a product that will draw customers away from the maker of the reverse-engineered product. Given this acceptance, it may be surprising that reverse engineering has been under siege in the past few decades. While some encroachments on the right to reverse-engineer have been explicit in legal rulemaking, others seem implicit in new legal rules that are altogether silent on reverse engineering, including the Agreement on Trade-Related Aspects of Intellectual Property Rights (TRIPS) and the Economic Espionage Act of 1996 (EEA). 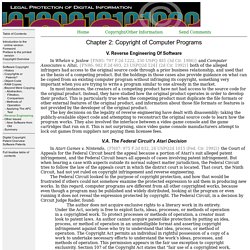 Jaslow and Computer Associates v. Altai, both of the alleged infringers had access to the original source code through a prior business relationship, and used that as the basis of a competing product. But the holdings in those cases also provide guidance on what can be copied from an existing computer program without infringing its copyright, something very important when you are trying to write a program similar to one already in the market. In most instances, the creators of a competing product have not had access to the source code for the original product.

The key decisions on the legality of reverse engineering have dealt with disassembly: taking the publicly-available object code and attempting to reconstruct the original source code to learn how the program works. V.A.