How to Be Someone People Love to Talk to 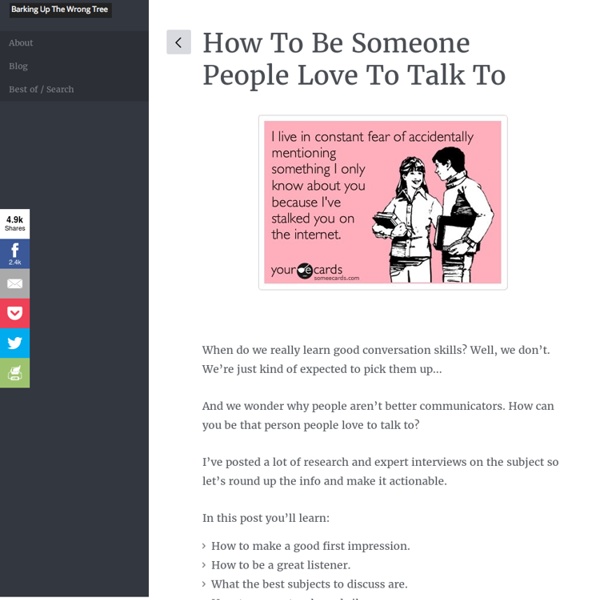 When do we really learn good conversation skills? Well, we don’t. We’re just kind of expected to pick them up… And we wonder why people aren’t better communicators. How can you be that person people love to talk to? I’ve posted a lot of research and expert interviews on the subject so let’s round up the info and make it actionable. In this post you’ll learn: How to make a good first impression.How to be a great listener.What the best subjects to discuss are.How to prevent awkward silences.How to politely end a conversation. And a lot more. How To Make A Good First Impression First impressions really are a big deal and talking to new people can be daunting, no doubt. It’s simple, really. Social optimists, of course, are in the happy position of expecting to be accepted and finding that, generally speaking, they are. Don’t take the cliche advice and “just be yourself.” Smiles are powerful and make you more attractive. FBI behavior expert Robin Dreeke recommends speaking slowly. Wrong question.

Stop Chasing Happiness: 17 Alternative Ways to Live a Great Life “If only we’d stop trying to be happy we’d have a pretty good time.” ~Edith Wharton I have a question for you. What would you be willing to sacrifice to be happy? Afraid of Love: 2 Fears That Keep People Single Could you possibly be afraid of falling in love? Watch out for these telltale signs, and finally free yourself to attract a genuine, loving relationship. Fear is a funny thing. When you’re in a scary situation—say you’re confronted by a bear—it’s easy to know what you’re feeling.

It's Okay to Be Good and Not Great “Good is the enemy of great” is one of the most popular self-improvement expressions there is. It’s the first sentence of an international bestselling business book, the title of another self-help book, and a mantra that NFL superstar J.J. Watt has used in press conferences. It sounds appealing and rolls off the tongue nicely, but there’s a good chance it’s downright wrong. We’re told that striving to be great and never being satisfied are necessary to meet the ever increasing pressures and pace of today’s world. It’s the only route to success.

Love is Not Enough In 1967, John Lennon wrote a song called, “All You Need is Love.” He also beat both of his wives, abandoned one of his children, verbally abused his gay Jewish manager with homophobic and anti-semitic slurs, and once had a camera crew film him lying naked in his bed for an entire day. Thirty-five years later, Trent Reznor from Nine Inch Nails wrote a song called “Love is Not Enough.” Reznor, despite being famous for his shocking stage performances and his grotesque and disturbing videos, abstained from all drugs and alcohol, married one woman, had two children with her, and then cancelled entire albums and tours so that he could stay home and be a good husband and father. One of these two men had a clear and realistic understanding of love. One of them did not.

How to Make Mindfulness a Habit With Only a Tiny Commitment When you sit back and reminisce about your life, it’s almost a given that the most enjoyable and memorable moments are the ones in which you were completely present. Do you look back with fondness all the times you spent thinking about work while you drove home, or pondered dinner while you wheeled down the frozen aisle? Unfortunately most of life passes that way for most of us. We’re in one place doing one thing, thinking of things we aren’t doing and places we aren’t at.

The Secret To Getting Other People To Trust You Quickly Psychiatrists and therapists face a daunting challenge. They usually have only a short time after first meeting a patient to earn their trust. Showcasing expertise and credentials helps in that process, but it only goes so far. 11 Ways to Use Body Language to Get What You Want Asking for a raise makes most people anxious. You love the prospect of making more money and and hate the fear of rejection. The most important element of negotiating a raise is the logic you use to illustrate why you deserve a raise in the first place.

How To Be Charming: 2 Secrets Backed By Research Want to know how to be charming? Ask yourself: What do you want in any friend or partner? Someone who is happy for you, wants the best for you and delights in your successes. Right? And research agrees: Being happy for people during their good times is more important than how we deal with the bad:

This Is How You Know You’re Not Settling For Less Than You Deserve Please. Don’t settle in this life. Don’t just settle through the days and years of your life. Don’t let boredom or regret get the best of you. Don’t allow yourself to give into just a mediocre life. I know it’s easy; it’s simple to settle.

Signs of an Emotionally Abusive Relationship Unlike physical or sexual abuse, emotional abuse can be much harder to pinpoint and recognize. Emotional abuse often is inconsistent in amount and duration and happens in multiple forms. At its core, emotional abuse plays into deep-seated fears of rejection, abandonment, unworthiness, shame and loveability. Faux Friendship William Deresiewicz discusses the shaky future of friendship on New Hampshire Public Radio's Word of Mouth Wednesday, December 16 at 12:40 p.m. Listen to the episode here. "…[a] numberless multitude of people, of whom no one was close, no one was distant. …"—War and Peace "Families are gone, and friends are going the same way."—In Treatment