Improving Millions of Relationships… One Language at a Time. 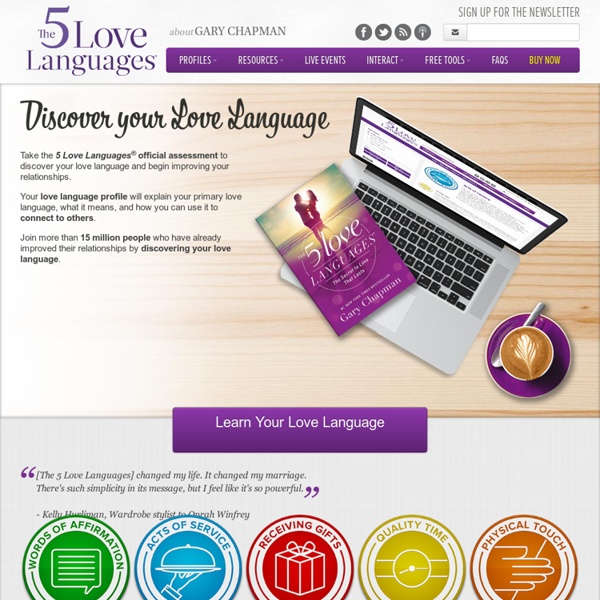 The Good Listener: What's The Perfect Soundtrack To Teenage Flirtation? : All Songs Considered We get a lot of mail at NPR Music, and amid the Bachelor Bouquets we ordered ourselves in order to appear loved is a slew of smart questions about how music fits into our lives — and, this week, thoughts on music to play at a dance for nervous, flirtatious teenagers. Nanna writes via Facebook: "This Valentine's Day, I will attend a formal thrown for freshman and sophomore college students in the Netherlands — they are giving us, the lecturers, free drinks, so how could I not? — and I'm already massively looking forward to observing awkward late-teens eyeing each other and trying to flirt.

100 Websites You Should Know and Use (updated!) Entertainment Meet David Peterson, who developed Dothraki for Game of Thrones There are seven different words in Dothraki for striking another person with a sword. Our Use Of Little Words Can, Uh, Reveal Hidden Interests Katherine Streeter for NPR One Friday night, 30 men and 30 women gathered at a hotel restaurant in Washington, D.C. Their goal was love, or maybe sex, or maybe some combination of the two. They were there for speed dating. The women sat at separate numbered tables while the men moved down the line, and for two solid hours they did a rotation, making small talk with people they did not know, one after another, in three-minute increments.

$30 Date Ideas For Your Site You can have your very own $30 Date Ideas Generator - LIKE THE ONE BELOW: Do you have a website based on romance / relationships? If yes, why not place your very own $30 Date Ideas generator on your site, blog or personal page. Schizophrenia Revealed To Be 8 Genetically Distinct Disorders Just over 1 percent of the American population has been diagnosed with schizophrenia, a severe mental disorder that causes debilitating symptoms including paranoid delusions, auditory hallucinations, and impaired social behavior. A new study has revealed that schizophrenia is not one disease, but eight disorders with genetically distinct causes. This could dramatically change how schizophrenia is diagnosed and treated. The research was led by C. Robert Cloninger of Washington University School of Medicine in St.

What teens really want to know about sex On the first day of my Sexuality and Society class, I don’t pass around anatomy drawings. I don’t hand out pamphlets about safer sex, although those are stacked on a table near the door. Instead, the first thing I do is establish ground rules. People should speak for themselves, laughter is OK, we won’t ask “personal history” questions, and we’ll work to create a community of peers who care about and respect one another. Only then can we get to work. I’m all about context. How Language Seems To Shape One's View Of The World "It's on the left," he says. "No, it's southeast of here," she says. iStockphoto hide caption itoggle caption iStockphoto 12 Signs You're Dating A Man, Not A Boy Ladies, real men do exist – and not those poor excuses you’re used to dating either. There are fully grown-ass men in this world and they would love to be with you. The truth is that you don’t have to settle for whatever boy comes your way.

Why Are More American Teenagers Than Ever Suffering From Severe Anxiety? At a workshop for parents last fall at the NW Anxiety Institute in Portland, Ore., Kevin Ashworth, the clinical director, warned them of the “illusion of control and certainty” that smartphones offer anxious young people desperate to manage their environments. “Teens will go places if they feel like they know everything that will happen, if they know everyone who will be there, if they can see who’s checked in online,” Ashworth told the parents. “But life doesn’t always come with that kind of certainty, and they’re never practicing the skill of rolling with the punches, of walking into an unknown or awkward social situation and learning that they can survive it.” Jean Twenge, a professor of psychology at San Diego State University who researches adolescent mental health and psychological differences among generations, used to be skeptical of those who sounded an alarm about teenage internet use.

Touch, Giving Gifts, Acts of Service, Quality Time, Words of Affirmation. Become fluent in all five, and you will have more love in your life than you will know what to do with. by pullthetrigger Mar 24