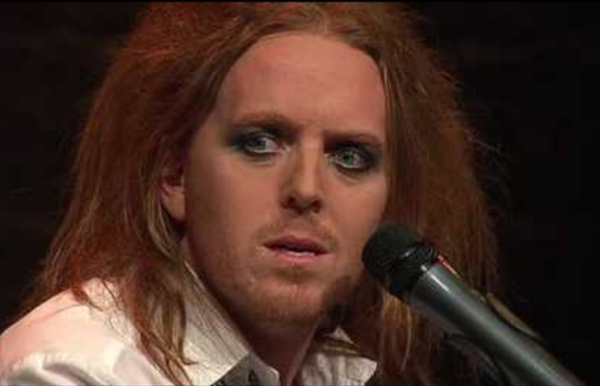 Stop stop-and-search and I might start helping you Policeman in police car sees me in my car. I see policeman seeing me in my car. Policeman sees me seeing him seeing me in car. Endangered languages - Ockham's Razor Robyn Williams: Languages – we each have one or two or three, and they are good for your brain. They keep it tuned and enrich your culture. Languages also tell us who we are and how we think. So it’s more important than it seems that we preserve as many as we can. Breaking News English ESL Lesson Plan on Racism An 80-year-old man has been found guilty in the killing of three men 41 years ago. A jury in Mississippi decided Edgar Ray Killen organized the murder of three civil rights workers in June 1964. He escaped murder charges but may spend up to twenty years in prison for manslaughter. Killen was first arrested 41 years ago but was released because of too little evidence. Police found new information recently and the trial reopened.

The Poet's Voice: Langston Hughes and You Activity 1. Defining Voice On the board, write a working definition of voice that is appropriate for your students' level of preparation and that reflects what they already know. The simplest definition is that a writer's voice reveals his or her personality. Mixed marriages in China a labour of love 24 October 2013Last updated at 00:23 GMT By Zoe Murphy BBC News Jocelyn and Jun have been married for nine years "From the first time I started to love a Chinese man, hiding became part of my life," says American Jocelyn Eikenburg. She had moved to Shanghai in 2003 to be with her now-husband Jun Yu. "In the past, students had been expelled for dating or marrying foreigners. We didn't know what would happen if the university administration found out, so we told no-one he was living off-campus with me," she says.

Strangers This EFL lesson is designed around a beautiful short film called Strangers directed by Erez Tadmor and Guy Nattiv, and the theme of racism. Students predict a story, watch a short film, speak about racism and write a narrative. I would ask all teachers who use Film English to consider buying my book Film in Action as the royalties which I receive from sales help to keep the website completely free. At 16, Ganesh got a job in Qatar. Two months later he was dead Amid the urgent bustle of Kathmandu airport, you can see one of globalisation's most bitter sights. At the departure gate, hopeful parents bid tearful farewells to their garlanded sons as they join the hundreds of thousands of Nepalese heading overseas for work. At the other end of the terminal, among the stream of passengers emerging through arrivals, the coffins of migrant workers are wheeled out on luggage trolleys to be collected by families. Some relatives are stoic, others wail and writhe on the floor.

LOOK: Kawaii: The Latest Japanese Craze To Sweep Britain The look may resemble a doll that has met an unfortunate accident with a vat of LSD, but the current craze sweeping over from Japan is Kawaii. It's a mixture of Manga meets colour explosion meets doll (there's a lot of Strawberry Shortcake ruffles), and The Sun reported: Followers are flocking to conventions, pageant-style competitions and clubs across the UK to show off their style and gain inspiration from other fans. In Britain, there is an annual UK Kawaii Star of the Year competition, which takes place every July at the Hyper Japan exhibition in Earls Court, London.

Michael Brown and Black Men - NYTimes.com The killing of Michael Brown has tapped into something bigger than Michael Brown. Brown was the unarmed 18-year-old black man who was shot to death Saturday by a policeman in Ferguson, Mo. There are conflicting accounts of the events that led to the shooting. There is an investigation by local authorities as well as one by federal authorities. Luis Suárez joins anti-racism calls after Dani Alves banana incident The Barcelona defender Dani Alves has sparked a social media campaign against racism in football as support flooded in from fellow professionals for his decision to eat at banana thrown at him by an opposition fan. Luis Suárez, Neymar, Hulk, Mario Balotelli and Sergio Agüero were among those who posted pictures of themselves taking bites out of bananas in tribute to Alves' actions in his side's La Liga match at Villarreal on Sunday. The Fifa president Sepp Blatter has branded the abuse directed at Alves an "outrage" and promised zero tolerance towards discrimination at the World Cup, while Villarreal took swift action by identifying the culprit and handing them a lifetime stadium ban. Alves' response to the banana being thrown on to the pitch in front of him as he prepared to take a corner was to nonchalantly pick it up, peel it and take a bite before continuing with the game.

Five of the worst public marriage proposals When we were on holiday in Australia, my boyfriend thought up an elaborate ruse to get me to a romantic clifftop location. All of a sudden I felt a tug at my sleeve, looked around and discovered him on one knee. I was extremely hungover and on 10-second delay, so I had no idea why he was down there. He looked a bit pale and shaky so I assumed his own hangover was kicking in - until he pulled out a little white box. I'm not going to tell you what he said because it was lovely and I want to keep it for myself. Our audience consisted of a few squawking seagulls; our 'special moment' wasn't shared by anyone else.

Woman Fired from a Lingerie Company for Being Too Attractive A New York lingerie company called Native Intimates is at the center of allegations that the owners fired a young woman for being too attractive. Lauren Odes, a 29-year-old data entry worker, says that the owners of the business were unhappy with her attire and fired her for being too attractive. Only a few days into the job, she was told to wear clothing that covered more of her body, so Odes put on a pair of leggings and gray t-shirt, according to the New York Daily News. This step was still not enough for the store owners, who are Orthodox Jewish. Analysis of Poems. This is a poem done on request for Manda. Hope you and all others who are looking for it find it useful. Disabled He sat in a wheeled chair, waiting for dark, And shivered in his ghastly suit of grey, Legless, sewn short at elbow. Through the park Voices of boys rang saddening like a hymn, Voices of play and pleasure after day, Till gathering sleep had mothered them from him.